Tonight’s walk was in some ways the antithesis of the one described in the post before, and again it was dark in the evening in the woods. This time the ‘incident’ happened early on and involved other dogs, not with people. I was the one who over reacted this time, not Fred.

I met a guy sitting on a fallen tree who said, ‘There is an Alsatian and a Husky ahead with my son’

I asked, ‘are they friendly, and play with Fred here?’

‘No don’t worry they are Ok, the Husky will be fine’.

My interpretation of that statement as a dog walker is, the Husky probably won’t be fine!

He went on to explain he was waiting here for his son to come back with the dogs, as he had a swollen knee which was painful and he was not walking well today. He told me he had been a motor cycle racer, who had a serious crash where other racers had ridden over him when on the ground. He went further to reveal a lot of sensitive personal data (GDPR) about his physical health as a result of this crash. By now Fred had found the Husky and the Alsatian and a three-colour snarling ball flashed by: White, Black and Ginger Fred being the ginger part. I felt this ‘play’ was turning into a fight, and started to put Fred on his lead. The son said, ‘he is only playing …… I think’.

I had already decided his Husky was fighting and not playing. As this was a formidable pair of snarling dogs I thought it time to exit Fred pretty sharpish. I said good bye and walked away with Fred who might have been described as over excited. We walked on for quite a while, Fred pulling very hard, and I had hoped the incident was behind him. I did the same as the last walk and let Fred off the lead. He sprinted off ahead quick as lightning, and I saw him start to arc away through the trees and bushes back behind me. I could no longer see him and immediately concluded he was running back to continue the ‘tear up’ we had just left. I thought these two dogs would fight together and Fred was going to come out of this damaged. I ran hard to catch them up. I called out loud ‘Fred’s following you’. ‘Fred’s catching you up’.

I had reached them before Fred, he was not there. The man said ‘What’s happened have you lost him?’ The son said, ‘No, here he is’. I could see Fred in the distance running along the path towards us. He had been doing his own thing and was not even interested in these dogs.

I had totally over reacted and misread the situation. Fred was fine and enjoying his walk, I was puffed out and stressed. Totally the reverse of yesterday.

I relaxed and enjoyed the walk and the sun set. I particularly noted the low orange light which really made Fred look an amazing colour. There is a pigment called Sinoper from Turkey which classical and renaissance artists used for drawing and under painting. This earthy orange is Fred, and the contrasting green of the field we sat and rested in made me think I should be painting.

I have been making green drawings for several years now. All my drawings are green. In response to fields, trees and open green spaces I find myself drawing. Now; by adding this earthy red I hope I will be able to get out of the green rut I feel stuck in.

Orange and Green: Can I even allow myself to be so minimalist? 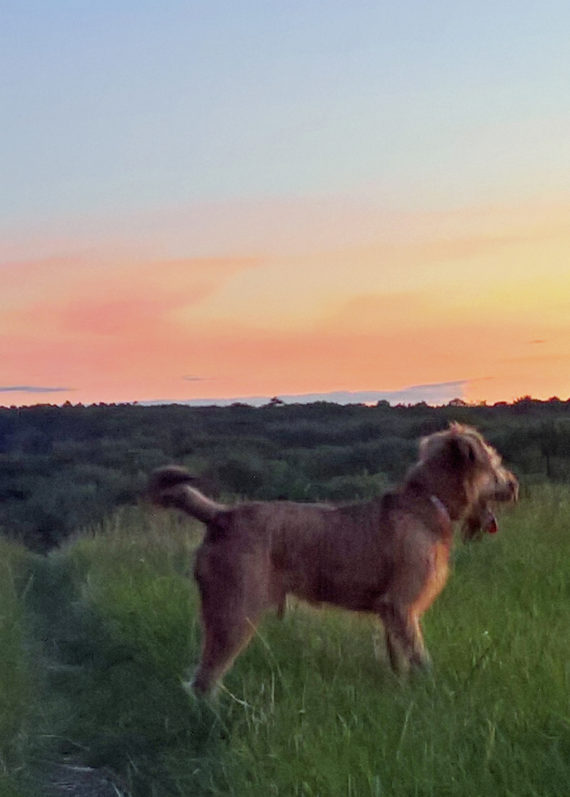