3 Comments
Viewing single post of blog Another Walk With Cosmo

A couple of days ago I installed Cosmo’s Post in the woods. I got permission from the owners of the woodlands, who were very understanding and allowed me to make the tribute. I made it from the trunk of a chestnut tree from the woods.

We spent a lot of time in these woods, and while I was artist in residence there he came to work with me every day. We spent many whole days in there.

I placed it right over the back of the woods a nice quiet spot and close to  where several years ago now we had had a couple of adventures together regarding other animals, namely wild boar and three ponies. There was an incident when I truly believed Cosmo had found a way into the wild boar enclosure and was actually fighting with them. It turned out he had found a hole in perimeter fence to the empty enclosure next door and was so giving them what for, on the other side of wire fence. ……….Relief when I realised I did not need to go in there and get him out………….and

The Konic Ponies was another fine mess he got me into..I thought the enclosure was empty as I remembered (or so I thought) seeing the ponies in another enclosure only a day or two before, so I was confident the enclosure was empty. So we went in and after a short while I saw 3 ponies (actually they are  horses really) running at full speed in the distance. Then sure enough as I suspected I saw Cosmo charging along after them. Eventually I got him back on his lead and we started making our way out rather sheepishly. The ponies I had forgotten about by now, as I was rather focused on finding a pathway out. Suddenly they were there in front of me, in a row walking towards us. It very soon became apparent that no matter how much Cosmo barked at them they were not going to be distracted and continued to walk towards us. It was like the Magnificent Seven with Url Brenner they stayed in a line and continued walking and walking forcing us back through bushes, undergrowth, brambles. I was actually running now, and they still kept up with me and pressed me back and back. I managed to pick Cosmo up and lift/throw him over the fence and I followed PDQ not caring how just as long as I got over it…… 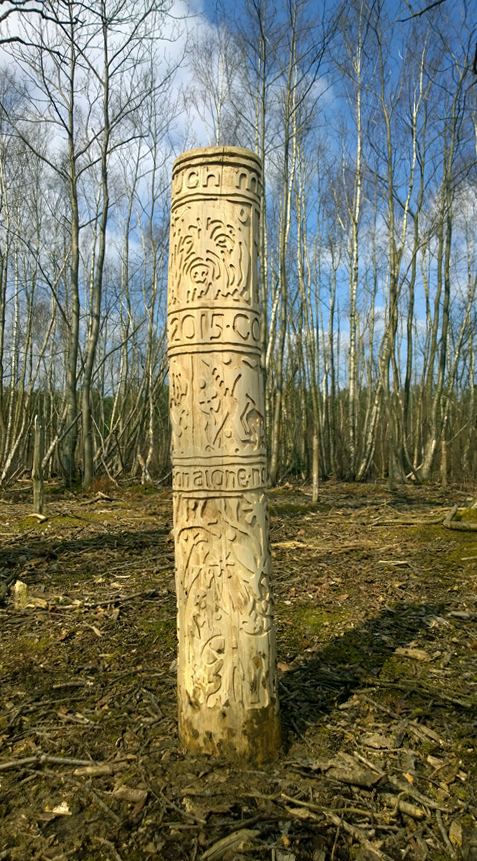 So, my post did have the three horses on, it has wild flowers, a deer, crows and oak trees. Several images of Cosmo and his foot prints plus a little bit of text.

It’s a nice part of the woods and one of the remotest. The wild boar are gone and they have been replaced with about a dozen deer. Lots of crows, I think there must be a rookery there.