I have decided to take us on one of Cosmo’s walks together in a sort blog version. It’s Sunday afternoon at about 4.30pm and Cosmo is starting to follow me around asking the question ‘when are we going then,……….. I don’t mind where?’
I thought with all the logging activity going on, causing some disruption on the road to Canterbury that was well worth investigating. As soon as we get out of the car I can hear heavy machinery working. I know exactly what it is…I have seen it before parked up at night out of sight from the road, left in dense parts of the wood till morning when work starts again…. it is a Forwarder made by John Deere (it even has a yellow stag/logo badge on it) and working on a Sunday!

I’m not a religious day of rest sort of person but it did strike me as unusual that he was working. Obviously money, but what was the hurry to complete this…..was the contract behind schedule, it’s been as dry as a bone for weeks? We walk over the tracks John Deere makes on his way to work every morning. 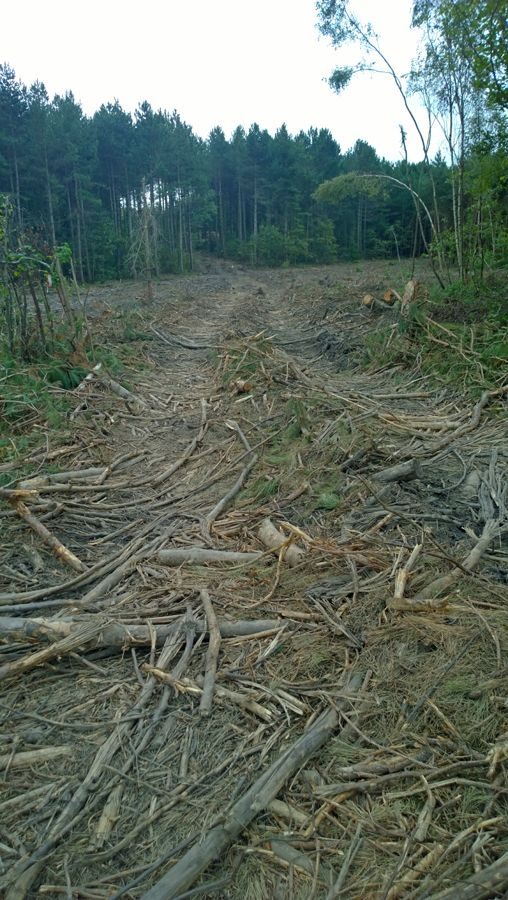 I say to Cosmo ‘we’ll go this way’ and see what he’s been up to. The area has been almost completely cleared. The policy is to cut down the established pine trees which were planted just after the war, but to leave the native trees in place. These are mostly birch and some oak trees and a some others I don’t know.

But it is completely unrecognisable and the paths we knew are totally gone covered by branches, cratered with huge ruts and soft mud in the bottom made by very large wheels, reminded me a little of Nash paintings from the trenches in WW1. We walk past John Deere working now, and watch from a distance as he picks up two large logs at a time with an on board crane. Then one of the logs rolls off the top of the trailer as it is full of logs. He picks it up again and places it more carefully and pats it firmly in place so as not to fall off on the uneven journey back to his logging depot. I say ‘We will follow the tracks he made before Cosmo because if we get lost we can always follow them back again’. 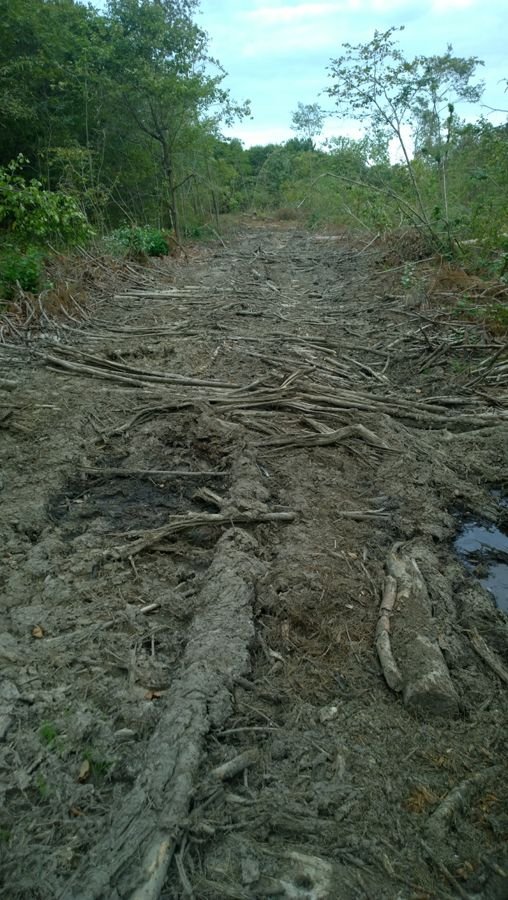 We walk over this springy debris for a while and the tracks swing into an area I recognise and we continue through a large area with no pine trees and things are as we know them for a while. I thought that the colours of the trees has not yet really started to turn yet and that I was looking forward to the Autumn Colours.

After some while I find a path that I think will take us back very close to John Deere’s lair where he keeps his logs. I ask Cosmo, ‘Is this the path?’ He runs off along it like it was his decision to go that way. I wonder if Cosmo does know the way back, he often points to paths I’ve never been along, or ones that lead us deeper into the woods with no thought about whether we’d get lost. He just leaves that bit of detail to me I think. The trees begin to feel lighter as more light enters the wood and we are suddenly out into an open recently cleared bit. The path vanishes again and we are walking over the springy brash scattered everywhere. ‘What’s he found’ I say to myself as I can tell Cosmo is checking something out . I hope it is not a dead rabbit or something he wants to eat, may be one of John Deere’s sandwiches left over from a packed lunch. Turns out to be a pair of steel tracks made of joining links, which I concluded must be put around the giant wheels to give grip in very muddy conditions. I lifted up the end link to see how heavy that was and concluded I would be unable to put these giant tracks over the wheels of my tractor and wondered how they got them on? A machine to help the machine. I can see John Deere driving off into the distance with an empty trailer for another load of logs. It’s about 5.30pm on Sunday, late to be just starting another new load, what is the hurry? I can see just through that gap over there is where he goes, his lair. Let’s see what is inside as know he won’t be back just yet.

That’s where he brings his logs and it is where the huge wagons load up. I don’t know where it goes after this . It has not seasoned or dried out. I remember someone once on another dog walk telling me the timber taken from these woods was used as biomass pellets for wood burning stoves. but I think long straight lengths like that are much more valuable to the construction industry. May be the sides that get cut off before the wood is prepared is used for fuel pellets. I hope so.
0 Comments

One of my favourite walks at the moment is along the coastline to Reculver, and over the past couple of months I have been able to build up a small series of digital drawings done in Reculver Country Park. These drawings are not exactly reference material, or studies but they were done while I was constructing a piece of public seating at Bishopstone Glen. The bench is called ‘The Groyne Wood Bench’ and is one in a series six each by a different artist. Here is a link to see some of the others:
http://www.canterburytimes.co.uk/seat-fly-plane-bench-art-trail/story-23000087-detail/story.html”

The wood was supplied by the Canterbury Council used for maintaining the groynes along the coast, it is the hardest wood I have ever worked with makes oak feel like putty!…But the decoration and imagery is a really about the things seen on my regular walks with Cosmo from Bishopstone Glen To Reculver and back.

and finanly: I am going to try and embed a slide show of my Reculver Dog Walk Drawings.

sadly seems like I was timed out ‘error’, so I think this should be a link to a web album Reculver Dog Walk Drawings

Cosmo likes local, that is what’s called the normal walk. Now the schools are back and the early evenings are not so warm and sunny  the normal walk is back on the agenda. Most of the summer we have to find non coastal or the more remote parts of the coast, because Cosmo does like a cheeky banger, or a burger. He does not mind if it is stolen or begged for, burnt or slightly raw, they are all great.

‘BBQ’s on the beach… wow…what can be better than that and I’ll have my tea when I get back, a win double……….. oh happy days’.

Not every one on the beach has the same opinion, I have had it explained to me very loudly on occasion that, ‘ tea has been ruined and would I replace the chips that are now inedible….!’

Sometimes other people encourage Cosmo and happily share their meal with him. Trouble with that is he believes everyone will have that approach.

So to avoid confusion,embarrasment and traumertized children summer walks along the beach are best avoided.

Just before our local walk I had compiled an indiginous colour chart or sample board about my new paints. These are the colours I have made from the cliffs at Reculver. I have given them all names which relate to exactly where the pigments came from. Westgate White for example is chalk taken from Westgate, a little further along the coast where the geology changes and the chalk cliffs of Thanet appear in the landscape. Another example is Reculver Red, this is Reculver Yellow (deep) wrapped in silver foil and burnt in a bonfire. Laylandii black is charcoal made in the same bonfire from twigs from the Laylandii trees that used to be in our back garden.

So my return to painting has slowly begun. I like local in a different way from Cosmo.

The term ‘indiginous colour’ is something I have to explore.

Sometimes when we walk home on what is knick named ‘the normal walk’ I take the quiet back roads through a residential area instead of keeping to the sea front. When this happens I tend not to put Cosmo back on his lead!

Why do I do that? I like to see how he behaves, an indicator of his attitude, his chance to have a say, as this is his opportunity to anoy me and play me up. Does he wait at kerbs, does he walk too far ahead so I have no control, or will he just randomly cross the road, or just head for the hills?

Never the later. He very very  rarely crosses the road but if a cat jumps down from a gate post on the other side then he has been known to loose his self control and chase it, but then at other times he just is not interested. The most common thing he does is he just speeds up slightly at the approach to a junction and walks just around the corner out of sight for a few seconds. I am unable to see if he has brazenly crossed the road and I hurry up to find him sniffing fire hydrants, brick walls, dustbins or a clump of weeds whatever the next point of interest is on the same side as the road as me waiting to cross. I think he is getting that bit of control back and knows he has he upper hand and likes to tease me.

‘What did you think I might have crossed over’.

At the top of the hill is an intersection in a lopsided star shape of 5 roads and here I get a little nervous as it takes a long time to cross this bit as it seems so wide at this point. In the past we have ended up in the same street, just on different sides of the road!

I mention this intersection as it is here on the top of the hill there is a large characterful detached house. This house is empty and has been empty since the day we moved to the area 14 years ago. I notice the garden has been completely cleared of brambles overgrown weeds and bushes, right back to the bare soil. I have lost count of the number of sold/for sale signs that heve been put up and down over the years.

When we first moved here the house seemed just about repairable, very run down a bit of a project but something that could be brought back. It is the architypal seaside house in my imagination and if I had more money than I knew what to do with I would have bought that house and restored it back as a wonderful family home for my children to grow up in, situated at the top of a hill very close to sea. Over the years I have watched it deteriorate as bits fall off it, seen the windows boarded up and metal fencing suround it like a beware ‘dangerous building’ senario. The garden was a jungle, but something is happening here. It is very common here for property developers knock down houses to aquire the land and build several houses on the plot.

I fear that will happen here.