We started the workshop by reviewing the work recorded from Workshop 1. There were 32 items of footage which gave us plenty of material to discuss and to inform what we focused on over those two days. We loosely grouped different trial movement and ideas into four broad categories which have the potential to be realised in different types of work:

– different contexts for a tea break so we work towards a series of cameos or situations
– a surround installation where the audience would be surrounded by projected films of different people moving in the elastic, maybe moving from film to film
– two figures in the space so that changes in scale and the different personalities of movement set off against each other. Sometimes the figure far from the camera and sometimes very close so that only small sections of the body are recorded
– using movement in the elastic to develop a choreographed work, taking it away from the elastic

The aim in the following two days was to work down into the various ideas more deeply and thoroughly, reviewing recorded work at regular intervals, having installed a great deal more elastic. 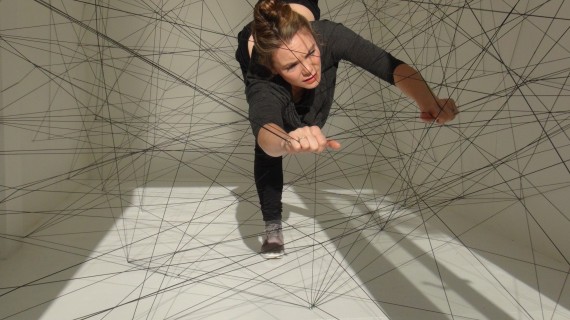 The dancer, Hannah Kidd, was more familiar with the space and the challenges of moving in the elastic. 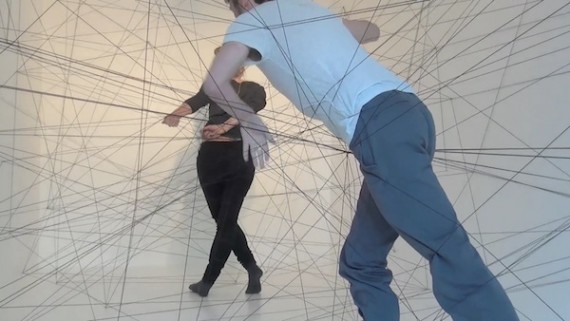 Darren and Hannah worked together in the space moving towards and away from the camera and varying the speed of movement. 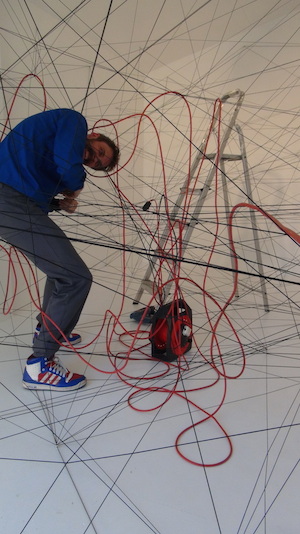 Darren pursued the idea of working in the space, mending or DIY, by taking in a ladder again but setting himself the task of setting up an electric drill. 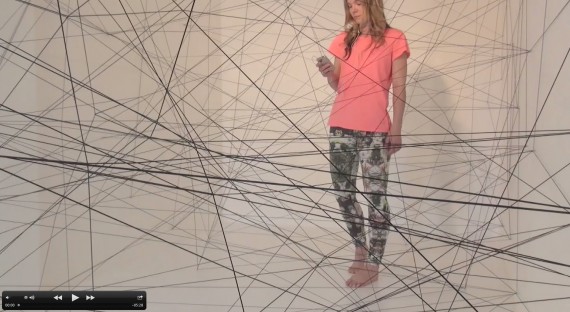 Each of us chose music on our iPod and attempted to dance energetically to it.

Later in March 2014 I attended Curating the Moving Image, a two day intensive at the Arnolfini in Bristol run by Al Cameron, Associate Curator of Performance, and Bridget Crone, curator and Visiting Tutor at Goldsmiths, University of London.

Attended by curators, academics, students and artists, this was a fascinating reminder of the history of artist film and video along with presentations and discussion about curating moving image work in the contemporary context of constantly accessible images and videos, online curated platforms, festivals and specially devised spaces. Also devices used for delineating a framework for experiencing the moving image and concepts of attention span.

Background reading included The Sensible Stage: Staging and the Moving Image (Picture This / Cornerhouse, 2012) and The Place of Artists’ Cinema: Space, Site and Screen (Bristol and Chicago: Intellect and University of Chicago Press, 2009).

Funding meant a large supply of elastic so the first job was to install plenty in the studio space. The first workshop brought in a dancer and aimed to give her time to experiment with movement, testing speed and weight bearing. Some of the work was purely abstract, where the dancer set herself tasks in order to move through the web in different ways.

We noted the ambiguity of the space – although very small in the films the space looks larger and it is difficult to read the perspective and the margins of the space. Strange things happen to the scale of people as they move back and forth in the space.

As we had found before, the sound of the elastic is intriguing and surprisingly varied.

As we tried different ideas and filmed work in progress we discussed the potential outcomes for the work and the possible contexts for exhibition or performance.

The introduction of the chair made reference back to Tea Break and introduced an element of humour.

We were conscious of the drawing made by the elastic, how this shifted with movement and then the introduction of objects such as the aluminium ladder.

The workshop set us questions to consider in the next: how would the movement change if the elastic was less taut? should we try and film with two cameras in different places? should different films emerging from this process stand alone or become a sequential ongoing series of incidents? in an installation would it just be film projection or also elastic? would viewers have to negotiate an elastic web? how could incidents unfold in a real domestic space?

With advice from METAL I also successfully applied for further funding through the Arts Council’s Grants for the Arts scheme. This extended our budget for R&D, to enable the purchase of equipment and software and to cover costs for Darren, a dancer and myself to work together between February and November 2014. This has given us a fantastic opportunity to more fully investigate our collaboration and to work towards new work comprising – potentially – film, film installation, live art and dance.

The R&D project is structured as a series of two day workshops, each recorded on video. This footage is reviewed before the next workshop and what has been learnt is fed into the research.

Having tested the symbiosis between our work and established a foundation for collaboration, I made a successful application for an a-n New Collaborations bursary. Without funding it was proving difficult to work together as often as we would wish and it was clear that we needed to work more intensively to really progress our ideas. We also wanted to work with a dancer and we could not recruit without being able to pay them and cover expenses. The application proposed that the bursary

would enable us to set aside dedicated time to interrogate our different perspectives, to outline ideas that we want to trial and how we might approach working collaboratively. We aim to test how an experienced choreographer and trained dancer would approach the concepts I am working with through discussion and practical workshop time. I would expect to achieve a shared understanding of our respective expectations and whether there is the potential for working successfully together. The workshops would result in filmed footage which will be edited and shared for review and
development.