On Sunday morning we went to the most incredible place ever. Even thinking about it now lifts my soul. It’s called Hulme Community Garden Centre. I love every single square inch of that place, seriously. Just go have a look at the place online, you’ll see what I mean. I’ll wait.

Isn’t it amazing!? There was this cat I made friends with there too. A beautiful one called Lily. I stroked her whilst she was mooching around and before I knew it, she had followed me back inside the

polytunnel where we was and she climbed up and sat on my lap. I suddenly became really popular haha! 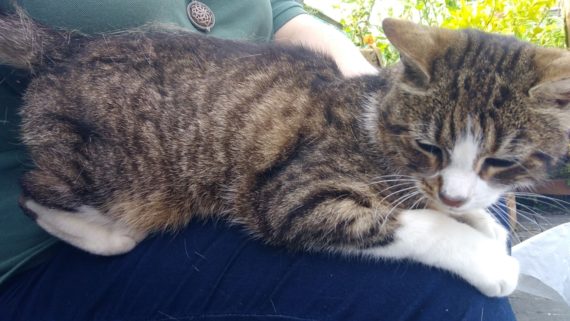 We spent some time writing in our reflective journals, before going to another part of the Garden Centre to sit outside in the sun and have a chat about personal resilience. When you work from within you give a lot of yourself, and as an artist who wants to work with and empathises with people (often people who are vulnerable or face strife), it’s very easy to experience emotional burnout and as freelancers (which I’d say most artists are) and/or activists there’s no Occupational Health to turn to for support. So this was a really important thing to cover, especially as I had only recently come out of a five month spell of depression.

Sara had a flip chart at the ready to explore ideas around balance, and the effects of neuro-chemicals and how we need to keep them in balance for our own mental wellbeing. She did this really useful diagram involving red, blue and green circles and for life of me I can’t find the notes I did about it, but I remember it helped me to see things a little differently.

We explored Meditation/Mindfulness, which some were opposed against. I personally feel it’s a tool to use in moderation, and for the right reasons. By this, I mean that meditation has helped me greatly in slowing down, being in the moment, reducing acute anxiety etcetc. I teach Mindfulness myself, for a reason, and that’s because it’s good. It’s easy to learn and a good preventative tool.
However, in my experience meditation is useless when you’re in crisis (maybe meditation gurus can do it effectively in crisis, but for us mere mortals it’s unlikely) and I oppose the commercialisation of it, the over-reliance of it in healthcare (yes, it helps, but it puts the onus for recovery squarely on the sufferer) and the fact that it stifles justified dissent (‘with each breath, learn to accept the crap life you have!’). It’s a powerful thing, and there’s no denying it works and can help resilience; but like most tools it can be used for nefarious purposes!

Chris continued upon the theme of ‘balance’ by telling us about this Native American Wheel analogy. Again, I can’t find the bit of paper I wrote it on but it was great. It was all about finding balance and it was a good way of reflecting on your life (if I find the bit of paper I’ll come back and add it here!).

After a beautiful lunch in the garden, we headed over to this awesome dilapidated old theatre, the Grand Junction Theatre/Hippodrome/Hulme Playhouse, which has been taken over by squatters and repurposed for benefit of the local community. Whilst we was there, there was a marketplace going on, with a DJ playing music and selling records on the stage. It was mega cool. We spoke to one of the founders and I found her and what the community had done there really inspirational.

We walked into Manchester City Centre to have a look at the Manchester International Festival. One of our UNIONITES, Gulcin, was performing there but her show time was moved last minute and we ended up missing her… which was a shame because I’d have loved to have seen her perform!

We wandered around, and caught this incredible performance that had moments of audience interaction. It was down a side street, and I sat on the kerb to watch it. It involved this amicable British cheeky chappie cab driver (meant to be an Uber driver) and a food delivery biker (meant to be a Deliveroo guy). I don’t even know how to explain it, but the cab driver ordered food from a takeaway in between jobs, but the rider delivered the wrong meal (at fault of the takeaway) and there was this sort of fight going on between them, and the driver was being out of order to the rider to the point where the rider has a bit of a panic attach. We then find out that he was a gay refugee from Nigeria and about the horrific journey he had to make to find safety in the UK… and then some. It was really powerful and emotive and it touched upon all sort of topics in the 15-20 minutes it went on. There were hints of community, racism, prejudice, Brexit, revolution, compassion… there was a lot in there. It was one of the best street performances I ever remember seeing, and I’ve seen a lot!

After seeing a bit of another performance and chatting to some of the others in UNION, I wandered over towards Manchester Piccadilly to make my way to my next adventure. And that was the end of my 3rd UNION weekend! It’s not long to my next one now – end of August, and we’re up in the North East. Where I admit, I’ve never been to lol.

It was a great weekend. I find the organisers and my peers so inspirational and motivational. I feel like I took much more away from this weekend than I did from the Hull weekend (some of the NW UNIONites expressed a similar feeling about feeling like you’re not learning as much on your home turf lol). I’m trying to think of further reflections, but I think I covered most of what I was thinking as I went along.