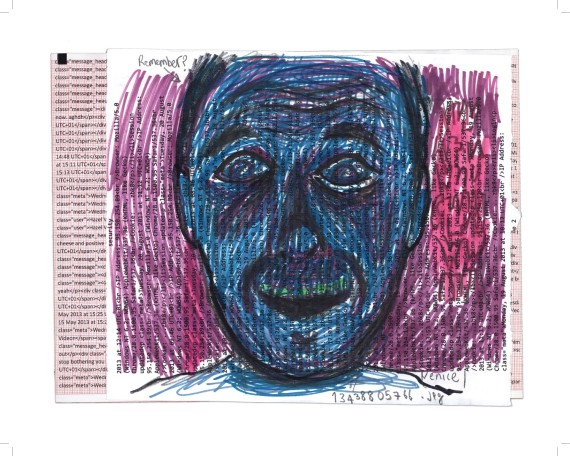 ‘A Digital Suicide’ is the term that refers to the elimination of one’s information online – namely social networking sites such as Facebook or Twitter.  The project undertaken over the past year and a half has been the documentation of Liam Scully’s Facebook ‘Digital Suicide’. When you committed digital suicide on Facebook , you are offered the opportunity to download your data, just in case you wish to return as you once were.  Every single interaction, like, poke, post and private conversation exists inside this zip file; pouring over your data will cause both fascination and concern.  “But those conversations were deleted years ago?” so you thought. As well as the data, there are photographs, hundreds, possibly thousands, every image you ever posted to Facebook, including the embarrassing ones you deleted.

In the light of the Edward Snowden revelations in 2013, Scully embarked on a project to reclaim that data. The past year and a half has been spent salvaging his profile, in a personal, tiresome and physical way. Every page of meta-data has been printed onto sheets of pink, thermal sensitive, electrocardiograph paper, every photograph ever posted has then been recorded through Scully’s physical act of drawing, collage, mark, rubbing out, spillage and stain; thus rendering the digital analogue and permanent.

The culmination of this body of work has always been to make a book, a massive book at that. A book that is heavy and awkward to hold, yet in contrast to the drawings themselves, the book is hand crafted and beautiful. Commissioning Book Works London, a limited edition of 5 was produced. This was an important way of distilling 5 years of once vulnerable data, and furnishing it into something of quality and value.

Further to the book, Union Gallery will for the first time accommodate an installation of the original drawings. A selection of these works on paper will cover the walls from floor to ceiling, representing just a 3rd of the entire collection. All of the 953 drawings will be available for sale;

“I am fond of the idea that these reclaimed life fragments can now be dispersed among people’s personal collections, where essentially they become the property of other people. It will then only be the book that binds A Digital Suicide together in its entirety.” Liam Scully is a ‘living’ artist working in London.