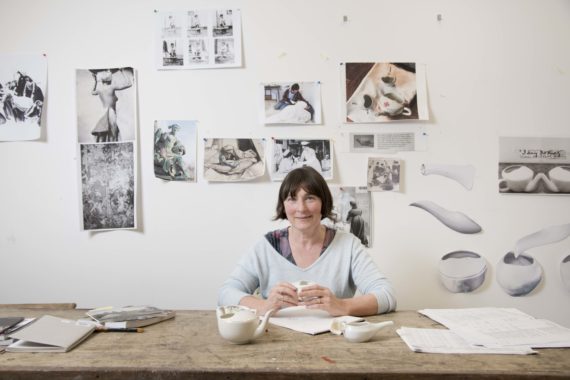 Wrong Right Hand and Witness Boards are collections of works on paper, drawings and collages. These are processes regularly used by the artist in the studio, but rarely available for the public to view.

The exhibition introduces the development of two large-scale commissions by Borland, being delivered in 2018: The Power of Twelve for Mount Stuart on the Isle of Bute and I Say Nothing for 14-18 NOW and Glasgow Museums at Kelvingrove Art Gallery and Museum (supported by Art Fund) marking 100 years since the end of WW1.

The commissions have been developed from extensive research into each institution’s collection of artefacts and in the case of Mount Stuart, its service as a Hospital during WW1.

A series of black and white drawings and collages, which incorporate a number of found historical and archive images and photographs from Mount Stuart and Glasgow Museums collections. The images are contemporaneous with the period between 1914- 18 and include figures posed engaging in ‘medical’ or ‘therapeutic’ practices. The figures swap right hands and arms with the statue of War, that stands in front of Kelvingrove Art Gallery and Museum, whose arm was ‘lost’ from 1941 until retrieval from the River Kelvin by a member of the public during the particularly dry summer of 1995.1

A series of new prints made in reference to the drawings of artist Birthe Jorgensen who had the role of ‘recorder’ at a performative, public event where Borland explored WW1 objects in Glasgow Museums Resource Centre. The drawings have been ‘witnesses’ in controlled explosion tests, being undertaken to realise components of the work for both Mount Stuart and Glasgow.

The expression ‘Witness Boards’ refers to materials specifically designed to bear the traces of explosions re-enacted by Forensic or Ballistic experts to gather evidence in relation to crimes or accidents.

The completed commissions will be unveiled on 23 June at Mount Stuart, Isle of Bute and 11 October at Kelvingrove Art Gallery and Museum, Glasgow.