Julie Hill, Deserts on the moons of other planets ☽ - a-n The Artists Information Company 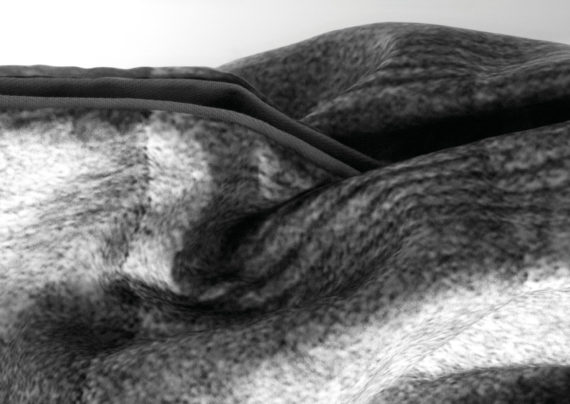 Within the architecture of the podium section, a cold moon is perceived over cosmic distances. A humming emanates from its dark equatorial regions. It is calling ☽ Reflected light illuminates the surface at a 35-degree angle of incidence, revealing dark lines snaking in patterns of undulation and divergence. Slithering dunes composed of loose, ice coated sediment forced by the wind into various markings: waves, cat scratches, intricate fingerprints ☽ Vast sand seas immerse in an intense psychological experience, giving way to flat, transitional zones of overall greyness. Forms and shapes are hard to recognise and appear as quickly as they are eroded. According to legend this place has the power to steal consciousness.

Drawing on the filmic and science-fiction qualities of The Brunswick Centre, Hill creates a mise-en-scène using mirrors and fabric printed with the deserts of the Saturnian moon Titan (Earth’s analogue within our solar system). Splicing fact and fiction, a narrative unfolds that draws on the existential philosophies that inspired both the building’s architect Patrick Hodgkinson and Michelangelo Antonioni, who shot a scene for his film The Passenger at The Brunswick in the 1970s. Drawing on the use of mirroring and doubling within this film – as well as the contrast between urban and natural landscapes, the resulting installation revolves around multiple dualities such as earth/moon, interior/exterior, desert/concrete, to explore our sense of place, not just on Earth, but in the Universe.
— —
Thu 23 Mar, 6–9 pm: Private view
Sat 08 Apr, 3 pm: Film screening of The Passenger, Curzon Renoir followed by panel discussion with David Levitt (Levitt Bernstein) and Farrah Jarral (Broadcaster/Anthropologist)
Sat 01 Apr, 6 pm: Artist dinner exploring desert landscapes of the Saturnian moon Titan. Please email [email protected] to reserve your place.

Julie Hill constructs narratives that unfold through various media such as photography, sculpture and installation. Sources of fact and fiction act as springboards for mise-en-scène that merge objects, texts and interventions to question the divide between the known and the unknown. Recent work has focused on otherworldly landscapes inspired by scientific cosmology and literature surrounding geology, magic and the cosmos.

She studied at Central Saint Martins, the Royal College of Art and is currently the recipient of a Royal Academy Schools Fellowship (2017–18). Her work has been shown at Glasgow International Festival (2016); Tate Britain, Dimensions Variable (Miami) and Guest Projects as well as informal interventions in communication networks and public space. Her work has been featured in The Miami Rail, The Independent, the Guardian, Artreview.com, IDEA, Aesthetica, NYLON and Modern Painters amongst others. She has been awarded Arts Council and Wellcome Trust funding for her artistic and curatorial projects including Cartographies of Life & Death (LSHTM/Artakt) and Crying Out Loud, a platform she co-founded that uses exhibitions and events to explore femininity in contemporary culture. Residencies include Lumen, Italy (2016) and The Florence Trust (2013–14).
www.juliehill.co.uk

Passen-gers is a site-specific exhibition series that explores the historical, social and material context of the Brunswick Centre. Artists present work sequentially to explore the real and imaginative associations of the site. The title references the 1975 film The Passenger by Michelangelo Antonioni that uses the Brunswick Centre as a powerful and otherworldly mise-en-scène. The plot follows a journalist who assumes the identity of a dead businessman while working on a documentary in Chad, unaware that he is impersonating an arms dealer with connections to the rebels in the current civil war. This notion of a ‘passenger’ as someone who inhabits transient identities and spaces, relates to how each artist is rendered a passenger within the larger exhibition structure – a structure that is generative and multi-directional, allowing different ideas, themes and narratives to emerge, overlap and intersect, creating dialogue over time.
www.passen-gers.co.uk

The Brunswick Centre is a grade II listed residential and shopping centre designed by Patrick Hodgkinson in the mid-1960s. It’s often misinterpreted as Brutalist and likened to a bunker or space-ship from a sci-fi movie set – in contrast to the architect’s vision: ‘…it was to be a village, not a megastructure, and never ‘Brutalist’, but would rather create a poetic construct of feel and not look…’. In 2006 the Brunswick reopened after extensive renovation works. A spruced-up shopping courtyard now occupies the ground floor while the first floor location of this project continues to bear something of its former ‘state of decayed majesty and poetic ruination.’

The exhibitions are hosted and supported by Gauld Architecture to encourage wider discussions about the built environment. www.gauldarchitecture.com

Supported by the National Lottery through Arts Council England.

Julie Hill is a British artist who works with photography in her sculptural installations, exploring astronomical and cosmological representations and the technologies used to construct them. She finds inspiration in science-fiction and horror to conjure imaginative environments of cosmic encounter. www.juliehill.co.uk