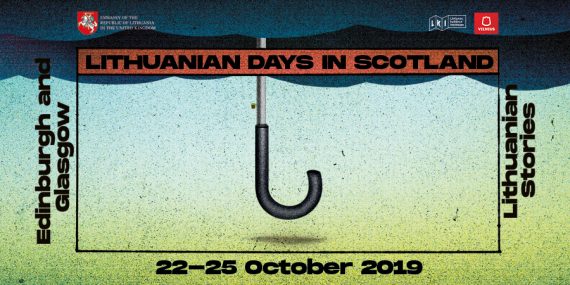 We would like to extend a warm invitation to join us this autumn for ‘Lithuanian Days in Scotland’. A journey of mutual reflection celebrating the connections between our two countries, the programme will explore the many ways these cultural ties have manifested themselves across the centuries: what we can learn from our histories, the sources of inspiration we share, and how we, the people of small nations in Northern Europe, might face the pressing issues of our European homeland and beyond.

We will share Lithuanian stories with the Scottish audience throughout a series of events between October 22nd-25th, using diverse forms of expression in creating an opportunity to ‘taste’ the unique flavor of Lithuania – one of the three Baltic countries – as well as showcasing the broad spectrum of talent displayed by a select group of Lithuanians working in the creative world.

Lithuanian Days in Scotland was inspired by the Scottish Government’s Nordic-Baltic initiative, launched in 2014 with the aim of strengthening the links between our communities, increasing our mutual engagement and discovering new avenues for dialogue, cooperation and exchange.

Launching October 22nd with a unique concert at the beautiful Cecilia’s Hall in Edinburgh, the Lithuanian Days in Scotland programme will feature talks, film screenings, and discussions, as well as a parallel programme of contemporary art exhibitions.

Our opening concert will present two virtuosos from different generations and genres – Liudas Mockūnas from the world of free jazz will collaborate with acclaimed classical pianist Petras Geniuša in performing a unique project, The Sea in the Forest, which will take us on a journey into the visionary world of one of the most celebrated and singular of Lithuanian artists, Mikalojus Konstantinas Čiurlionis (1875-1911).

Lithuania and Scotland based professional storyteller Daiva Ivanauskaitė will invite us to immerse ourselves in the ‘Garden of Tales: Stories from Lithuania’ as part of the Scottish International Storytelling Festival ‘Beyond Words’ on the 23rd of October.

Later that day, we will head to one of the University of Edinburgh’s central auditoriums for ‘Lithuania and Scotland: past, present, future’ – a roundtable discussion between distinguished Lithuanian and Scottish academics. Guests will have the unique opportunity to meet prominent Lithuanian intellectual prof. Tomas Venclova, who is also a poet, publicist, literature researcher, emeritus professor of the Yale University and a famous dissident of the Soviet times. Internationally acclaimed expert in Polish-Lithuanian Commonwealth history, and Burnett Fletcher Chair of History at the University of Aberdeen., prof. Robert Frost will complete the panel.

Lithuanian Days in Scotland will also include screenings in Edinburgh and Glasgow of poetic documentary cinema from the Lithuanian film archives, and will conclude on Friday 25th October with a talk at Glasgow’s Collective Gallery by curator Adomas Narkevičius from the Rupert Centre for Art and Education.

Lithuanian Days in Scotland has been organised by the Embassy and Cultural Attaché of Lithuania in the United Kingdom with the support of the Ministry of Foreign Affairs of Lithuania and the Lithuanian Cultural Institute. The organisers are particularly grateful to the Scottish Government for their generous patronage, and would like to extend that gratitude to the City of Edinburgh Council, the University of Edinburgh, St. Cecilia’s Hall, CCA Glasgow, Collective Gallery, Edinburgh Filmhouse, Civic Room gallery, David Dale Gallery, and Street Level Photoworks.

Lithuanian Days in Scotland is also proud to invite you to experience more Lithuanian Stories with further events scheduled beyond the time frame of 22-25 October- including solo shows by Robertas Narkus at David Dale gallery and by Marija Nemčenko at the CIVIC ROOM respectively, while Gintautas Trimakas will launch his new publication at Street Level Photoworks.