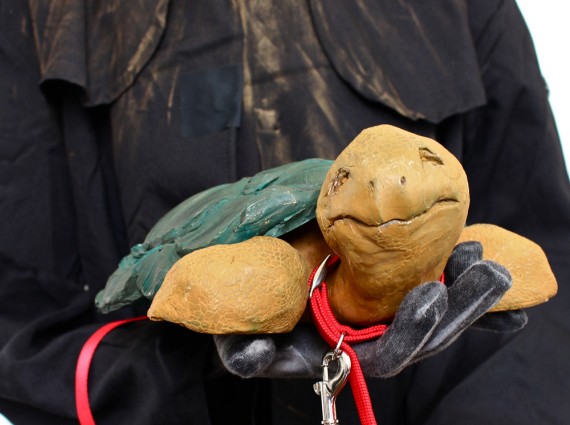 PASSAGE
A site-specific installation at Curious Projects by Murray Anderson

{an excerpt, a transition in time, a reading, a passing, a narrow,
an interval, a rendering, portal, lacuana, permeation, vacuation…}

‘Passage’ presents a fragmented and temporarily displaced tableau of interrelated sculptural objects. It simultaneously responds to the surrounding arcade architecture of the space (creating the street as interior), and to the interiority of the urban flaneur.

[Inextricably linked to the modern metropolitan condition, the passage of flanerie is closely mapped to the fate of the arcade. First emerging with the advent of nineteenth century shopping arcades, the flaneur was frequently described as a dandy and idle perambulator, characterised by both perceptive observation and individual reverie. The eventual construction of pedestrian street pavements hastened the decline of the arcade and precipitated the flaneur’s final incarnation as a sandwichman – a denigrated, marginalised figure and walking billboard, no longer only an observer but an abject object to be seen.]

Bracketed within the narrow of the space is staged a forlorn sandwich man advertising café ware and an unknown ‘man of the crowd’ with testudinal companion, caught in stasis. Behind hangs an approximated backdrop that mirrors the front facade, creating a crude illusion of another interior/exterior double passage thereby momentarily displacing the viewers’ position: from looking in to looking out, questioning who is being observed. An artificial ghostly, pale green light suffuses the internal environment, shifting the register of the space to an ‘other’ world aura, echoing the distractive glow experienced by the contemporary, non-ambulatory flaneur via computer and televisual light.

‘Passage’, through conjuring the uncanny, tempts curiosity and proposes a reflection on the forgotten histories sedimented within the associated structure of the gallery’s site. Less concerned with the narrative connections that might be made, ‘Passage’ intends to encourage the viewer to linger and tally, shifting the tempo of the encounter to that of the flaneur.

Exhibiting artist:
Murray Anderson works in sculpture and installation. He studied at Camberwell College of Art (MA) and is currently undertaking a practice-based research PhD at Middlesex University. Murray Anderson exhibits regularly and was recently part of a collaborative project at Block 336 in London, funded by an Arts Council ‘Grants for the Arts’. www.murray-anderson.com

About Curious Projects:
Tucked away in an indoor Edwardian arcade in central Eastbourne, between a nail salon, a florist and a barber, our (tiny but quirky) Project Space & Art Gallery seems an unlikely venue for contemporary art – but we believe it is its incongruity that makes it work. The space is particularly suited to installation art and we want it to be a platform for exciting and innovative work. Over the next year we will invite artists to  experiment and develop site-specific work and we look forward to working with artists whose work is critically-engaged and not primarily commercial. We are particularly interested in work that could provide fuel for discussions on the interplay (or perhaps disjunction) between making and thinking. http://www.curious-projects.co.uk/project-space-and-gallery.html