2021 – How was it for you? #1: Jasmina Cibic, performance, installation and film artist - a-n The Artists Information Company 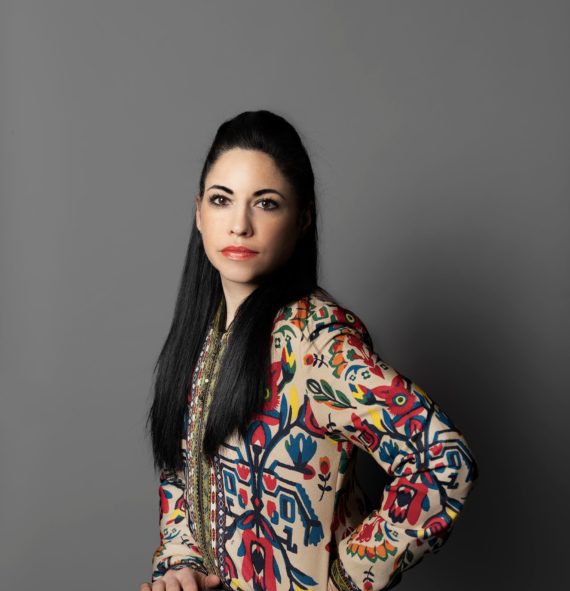 2021 has been a productive year for Jasmina Cibic. Despite restrictions on travel and cultural production, she was able to present solo exhibitions at venues across Europe and complete her film The Gift, which won the Film London Jarman Award. With a practice that also spans performance and installation, Cibic considers how ideologies and cultures are constructed and then framed through mechanisms such as art and architecture. Her work explores the construction of national culture and how it can be used for political aims, and looks at forms of soft power.

Cibic has previously represented Slovenia at the 55th Venice Biennial and had a solo exhibition at BALTIC, Centre for Contemporary Art, Gateshead. Here she discusses the last 12 months and her hopes for the next year.

What kind of a year has 2021 been for you?
Like all cultural producers, I’ve been pushed to re-invent what I do. Without our audience we don’t exist. So, I’ve needed to think about how to reach them, without compromising the essence of my practice.

During the long winter months of the London lockdown, I was growing moths for a project on Revolutionary Artists with Museum Sztuki in Łódź. I also made a series of paintings of flags to transnationalism, which were gifted to the Palace of Nations in the 1930s. These adorned the snare drums I used for a series of performance works held in countries experiencing a new wave of populism. I also began writing the script for my next film and finally had time to comb through the archive I have collected over several years of travel for research, unscrambling the bad handwriting and decoding the languages that I am only half proficient in.

When the lockdowns across Europe lifted in March, we managed to complete the last part of my film The Gift at the Palace of Science and Culture in Warsaw. And, my solo show in Łódź opened. Things seemed to be moving again, even though international audiences and journalists were unable to travel.

In September, I opened my final solo show of the year at Mac Lyon. This exhibition included a three channel installation of The Gift and a recreation of the stage for Bela Bartok’s pantomime ballet ‘Miraculous Mandarin’, based on lost archives of the Yugoslav Pavilion at EXPO 1958 in Brussels. It’s been a dream of mine to reconstruct the stage for ‘Miraculous Mandarin’ for almost a decade and being able to work with performers again, within an immersive installation space, was fantastic. Seeing live audiences within the screening space – it was pure magic.

Autumn saw the art world return on steroids. Unfortunately, many symposia and artist talks remained on Zoom and only our works travelled. I am now working towards a show at Museum der Moderne in Salzburg, which opens next year. Fingers crossed all those crates manage to pass through the UK/EU border.

What challenges did you face in 2021?
Every government had a different approach to what was allowed in terms of cultural production and viewing art in museums and galleries. It was like a Tetris game with different levels.

My solo show with Museum der Moderne in Salzburg was the most difficult exhibition I’ve worked on. We kept thinking we were going to get to the archives, but that just didn’t happen. When you’re unable to travel, it’s difficult to keep calling your practice context or site specific. I always think about the audience. I always think about the location, not so much the conditions there, but the way the way the work is perceived – that’s really important for me, as it is for all practices that are playing with political decadence, which is surrounding us.

What has changed for the better?
It’s been amazing to see that there are still a few institutions where curators are encouraged to be your sparring partner in terms of critical engagement. Not just someone that’s there to choose the colours but someone who understands what is at stake and appreciates that risk-taking is needed. And that you, as an artist, are there with the best intentions for the practice itself. It’s about creating a dialogue with the audience, pushing for some really important questions to be asked.

What would you characterise as your major achievement this year and why?
Being able to finish my film The Gift was a major achievement. Like so many other projects, filming was interrupted by lock-downs. As an international production, it also fell victim to the political games governments across Europe began playing. Culture was one of the first things taken away from citizens. Paradoxically, this was the core concept of the film itself, since it asked whether culture can escape becoming a Trojan horse for political and diplomatic interests.

We are entering a period of enhanced self-censorship, where second guessing national agendas is once again shaping our cultural capital. Completing The Gift showed how critical thought is still possible despite a persistent drive towards the instrumentalization of culture. Being awarded the Jarman Award for the film was brilliant for the entire team that made it happen.

How will this experience have an impact on your own work?
We lost some of the locations for The Gift due to new nationalist governments in Europe. As national cultural agendas were rewritten, we also lost placements in art institutions. I hope to be able to pick up where we were cut off, bringing together a rejuvenated new team for the next film I am working on.

I think it so important to keep culture alive. Because, we all know how quickly cultural capital can collapse. You can lose it in one year and it takes such a lot of time to rebuild it.

Is there anything you’d like to have done but haven’t?
I’d liked to have filmed a scene featuring the horse that the Slovene state gifted to Muammar Gaddafi inside the Museum of Modern Art in Ljubljana. It seems the horse will need to live for another few years.

What are you looking forward to in 2022?
I’m looking forward to my solo show with Museum der Moderne in Salzburg. Titled ‘Most Favourite Nation,’ the exhibition will be a feminist reading of nation-building and soft power. It brings together remnants from the founding fathers of the European project. The title refers to the indirect exercise of political power by states and actors over other states and societies through attractiveness. The role model effect facilitates the transmission of their own values. The exhibition will be a total theatre: an immersive environment featuring films and performances – a proper reader to the double game of culture and national political agendas in which we find ourselves in once again.