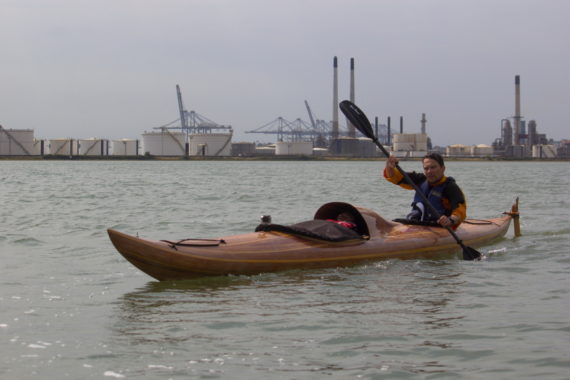 For the inaugural Estuary festival, Kent-based artist Adam Chodzko has taken a specially adapted two-person kayak, with room for a passenger to lie down in the front, on a history-rich river journey.

The latest in an ongoing series of watery outings for Ghost (2010–16), the kayak itself and a selection of films taken from the viewpoint of a camera on its bow, feature in the group show, ‘Points of Departure’.

Exhibited in the grade II listed Tilbury Cruise Terminal alongside work by more than 20 other artists, Chodzko explains that for this latest Ghost voyage all the passengers had a common affliction. “Many passengers [in the past] have drifted off to sleep when being transported, so this time I looked for people suffering from insomnia to be ferried in Ghost.”

He adds that this group focus “serves to create a parallel state of inbetweenness” for the work. It’s a description that could also be applied to the Thames Estuary area that is the focal point of this new biennial festival, produced by Metal and curated by Colette Bailey, Gareth Evans and Whitstable Biennial director Sue Jones.

Says Chodzko: “The 20th century saw a gradual retraction away from the UK’s marine and fresh waters, and the start of the 21st century seems to see a reclamation and revaluing of these neglected littoral zones. The Estuary festival honours and acknowledges this culture in a very ambitious, cohesive but eclectic way.” 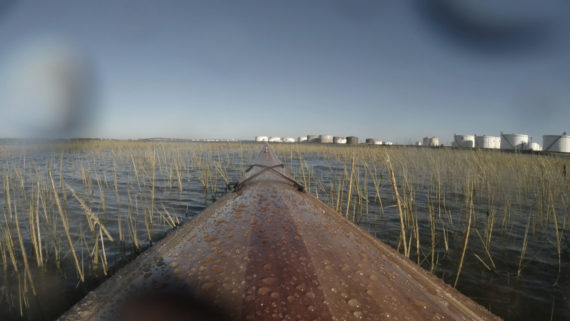 Can you describe the genesis of Ghost?
If I was to really take it back to its start I think it comes from my childhood fascination with trying to perceive, then enter, the horizontal interface between sea and sky, visible through swimming goggles worn between those two elements – that, and a curious relationship with sleep. More recently, as an object and a process it emerged as a convergence of a whole series of interests that have been circulating in my work. I guess at its simplest it’s an exploration into whether I could develop a particular form of new relationship between a site (or, more, a journey through a site) and a stranger, and ‘the artist’, all in close proximity to one another.

And what does Ghost entail?
I designed and built a new form of ‘kayak’ that carries a single passenger in a reclining position, separated from me visually, and in this vessel I ferry them to ‘the isle of the dead’. This ‘dead’ can be literal, or figurative; some form of entropy. Sometimes it’s historical, sometimes futuristic, but the idea is that we (the passenger, the vessel, the water and I) are always trying to attain access – maybe just a glimpse – to another state, and it is about being suspended within that process.

It also comes out of an interest in questioning when and how something (an object, a process) becomes an art object and what happens to the quality of its status if its location or use alters; it is a sculpture hanging in a gallery, it is a process of encounter out on the water, it generates a video archive of these voyages. So, is it always the same artwork – or even an artwork at all – in these transitions? All of these ideas are really about trying to locate an experience on the cusp – of each other, of ourselves, of the world, in a kind of flow of in betweenness. 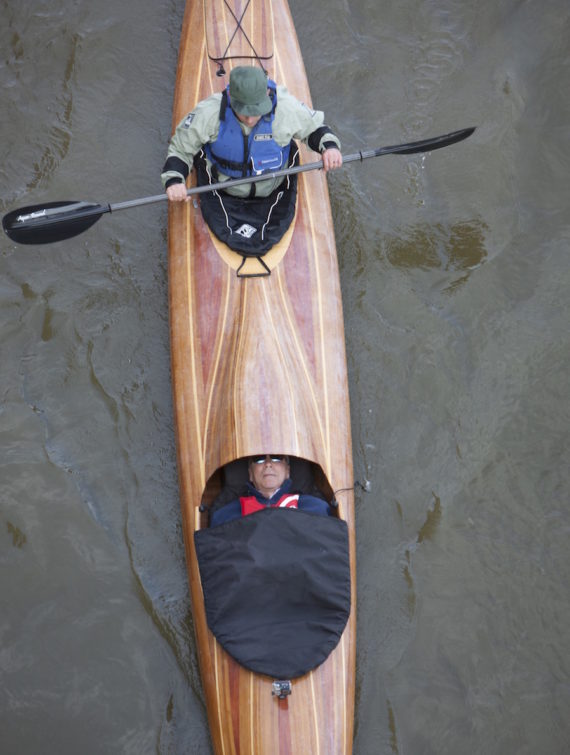 Do you feel there’s an intimacy between you as the artist/canoeist, and the participant? Or is it much more about an intimacy between the participant and the water?
I normally choose bits of water which are pretty inaccessible from land so there tend to be very few people around to witness the journey. I can’t see the passenger when I am paddling and we travel in silence but I do spend a lot of time wondering how they are – whether they are enjoying it, hating it, asleep, cold, wet, etc. Empathic projection and empathic exchange are a really important part of my practice; where we make a leap into someone or something else in order to attempt to properly imagine and embody it or be embodied by it. I become very conscious that every movement of the paddle, every direction I shift Ghost will shape the passengers’ perception of place and so it is a very immediate form of guidance, a piece of theatre.

How significant is the route that Ghost takes for its Estuary festival voyage?
The route varies for each place but always has to lead towards some form of conceptual edge. For Estuary we have been going down a kind of ‘gut’, into the ‘mouth’, and, apparently, from the past and into the future (where Vange and then Holehaven Creeks meet the Thames, just off Canvey Island, Essex). This takes us, on an ever widening waterway, through the large site of an old explosives factory, a landfill site, peasants rebellion marshland, to modern flood defences, oil terminals, oil refineries, industrial decline and rejuvenation, and the new United Arab Emirates’ owned super port, DP World.

How integral to the work is the documenting of the journey?
It’s a crucial third stage of Ghost; from sculpture (the object in a gallery) to performance to video; a dematerialization in three acts. In Estuary’s ‘Points of Departure’ exhibition, Ghost hangs in a huge and deteriorating cruise terminal ‘hangar’ at Tilbury docks. At the centre of this hall is a small and isolated ticket office with five rooms. One of each of the previous Ghost projects (Swale/Medway, Tyne, Tamar, Thames and Essex Holehaven) will be allocated, as videos, to each of these rooms. 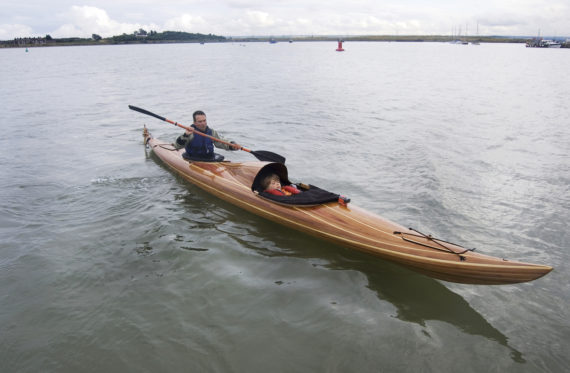 Water, and rivers in particular, has many associations with death, the afterlife, ideas around being returned to the ‘source’. What’s your take on its allure
Water is very strange, hypnotic stuff. Despite my familiarity with it, visually and conceptually, water appears infinitely complex, inchoate yet entirely singular, whole. Paradoxically, it seems more complex than more fragmented terrestrial matter – a city or a field for instance. Our own bodies are more liquid than solid so our affinities are really with this wet stuff. There is the possibility of water cleansing and healing us but it can also easily kill us. It is unpredictably menacing and threatening and can appear angry, violent and then suddenly serene and supportive. Unlike earth, water behaves like a person’s (or animal’s) shifting psychological states, so the character of each Ghost voyage feels like it is in relationship to another’s emotions.

You’re based in Kent and teach at the university, so do you have a particular affinity with the Thames Estuary and its history?
Yes, like some Ballardian short circuiting – rather than necessarily a rational choice – I find myself constantly at the water’s edge. I live next to the sea (in Whitstable, Kent) and teach at the University of Kent in Chatham’s Historic Dockyard, so right next to the River Medway. A lot of my ancestors seemed to spend more time at sea than on land so perhaps they are keeping me in a state of real (and definitely not financial) liquidity. The Thames Estuary is historically, and now, a key nexus of global connectivity. An imminent and prior flow of matter and (‘foreign’) ideas before they coagulate in the capital. In Kent and Essex, maybe because of this identity of fluidity and precarity, it is – and was – quite raw and rough with rebellion, resistance, witchcraft, criminality and poverty, ebbing and flowing through its bleak marshes. 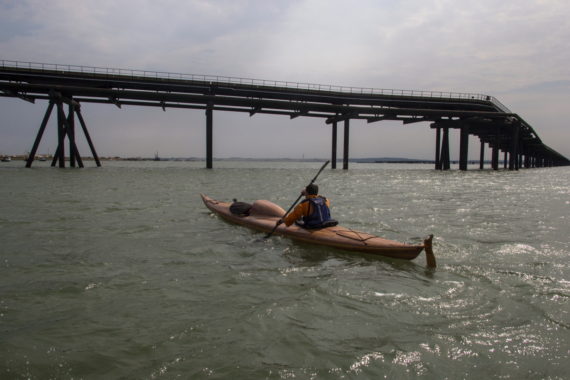 Art aside, are you a keen canoeist?
I am very un-sporty but very restless and like to head out into the landscape to ‘deal with stuff’. Kayaking feels close to flying, with arms quietly propelling the body’s motion. There are many very bizarre aspects to it; the hull is a membrane only a few millimetres thick separating this ‘flight’ from potentially deep and deadly waters. Visually and conceptually your body merges with the kayak which becomes prosthesis. You can travel along really tiny shallow trickles of water so can develop proximity to things totally inaccessible otherwise. It is a very surreal activity.

Ghost by Adam Chodzko is part of the ‘Points of Departure’ exhibition at Tilbury Cruise Terminal, part of Estuary 2016 which runs from 17 September to 2 October at various venues. www.estuaryfestival.com