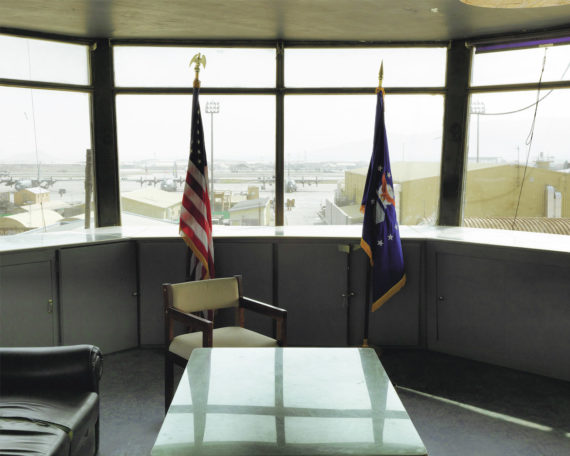 History, politics, representation and a sense of unseen experience are at the core of Edmund Clark’s photographs. Whether photographing the interior of Guantanemo Bay or the house in which a man suspected of involvement with terrorist-related activity has been placed under a Control Order, these themes are continually at play.

In his latest photobook, Negative Publicity: Artefacts of Extraordinary Rendition, Clark has reached out beyond photography. Collaborating with counter-terrorism expert Crofton Black, he has fused images and redacted documents into a research-led publication that interrogates the nature of contemporary warfare and the invisible systems of state control.

The duo delve headlong into the shadowy subject of the CIA’s programme of ‘extraordinary rendition’ – the forced transfer of people without due legal process – in their worldwide search to document various detention centres, detainees’ homes and other secret government locations.

Clark’s subsequent photographs of spaces and surfaces contain a hidden, violent tension that stands in for the countless people who have disappeared into a mysterious prison network – the vanishing point for the law. 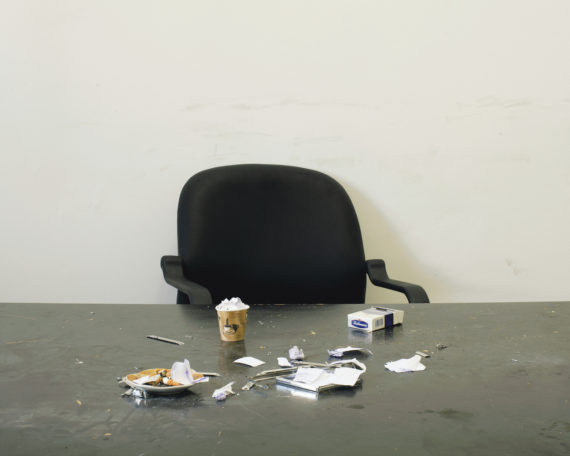 Vast in its scope and complex in its conceptualisation, Negative Publicity questions the nature of democracy, accountability and legality, all the while reflecting on the opacity of the photographic medium. The work now forms part of a major, immersive solo exhibition at the Imperial War Museum London, ‘War of Terror’, curated by Kathleen Palmer and Hilary Roberts.

What is the significance of the words ‘negative publicity’ in the book’s title?
The phrase ‘negative publicity’ comes from the transcript of a court case between two companies disputing a payment for the number of hours that a particular plane flew. The case established that there was ‘negative publicity’ about the plane due to its association with rendition flights. The court case was not concerned with the legality of the secret transportation of individuals for interrogation. Of course, the work is all about making public the processes and sites of rendition which can be interpreted as being negative publicity for those responsible.

The phrase can be interpreted in other ways, too. Much of the material in the book reflects and visualises the secrecy surrounding this subject. Perhaps the title is a way of describing this, of the opposite (or negative in photographic terms) of making public. Eyal Weizman’s text in the book reflects on the idea of ‘negative evidence’ or the importance of what is made evident by its absence due to cover-ups, secrecy and redaction. Negative publicity could, perhaps, also be understood in relation to this idea. 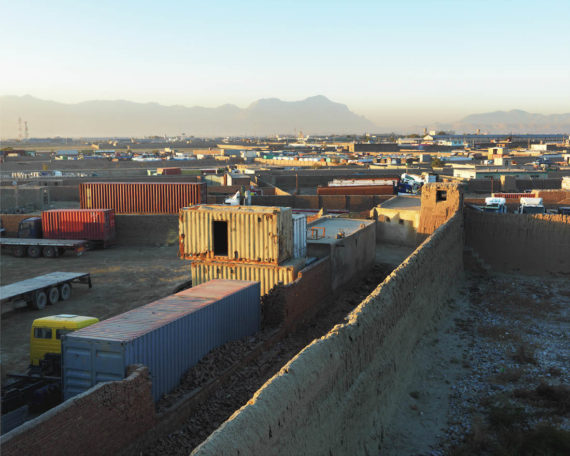 None of your photographs in Negative Publicity are populated with people. How effective an approach do you consider this to be given that we are ultimately dealing with lives afflicted by trauma?
Ultimately this subject is about bodies that experienced pain as a result of extra-judicial secret detention transportation, interrogation and torture. Negative Publicity goes behind this, however, to look at the companies, the locations, the planes, the processes and the networks that led to these experiences. It is, in turn, about the other ways in which the subject has been documented by, for example, the CIA, the Milan police, European Union rapporteurs, Human Rights Watch and New York University Law School. It is about secrecy, denial, redaction, facelessness and the absence of law and accountability. Certain individual cases emerge from the paperwork and the photographs but this is not the place to show the individuals. It would unbalance and undermine the way the book works and what it is exploring. 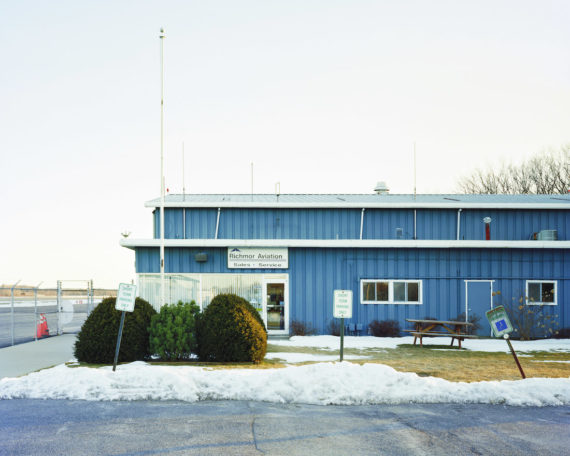 How did you translate this book project into exhibition form for the Imperial War Museum?
In the Imperial War Museum the work about extraordinary rendition has three presences. The first room has one image from floor to ceiling of a redacted photograph of a forest where a rendition flight pilot lived in America. I want the visitor to be confronted with walking towards or into a redacted landscape. The forest is associated with something very natural but is also a symbolic place in literature where journeys, challenges, mystery and fear are encountered. There are also two key documents from a CIA report and the court case in this room. In the second room, over 110 pages from the book appear nailed to the wall in a glass-fronted case. This represents the global scale and complexity of rendition and the research undertaken by Crofton Black. I also wanted to make the book form part of the exhibition, as exploring this has been an important part of my work. There is also a short film in which Crofton and I talk about our collaboration and the subject of rendition. 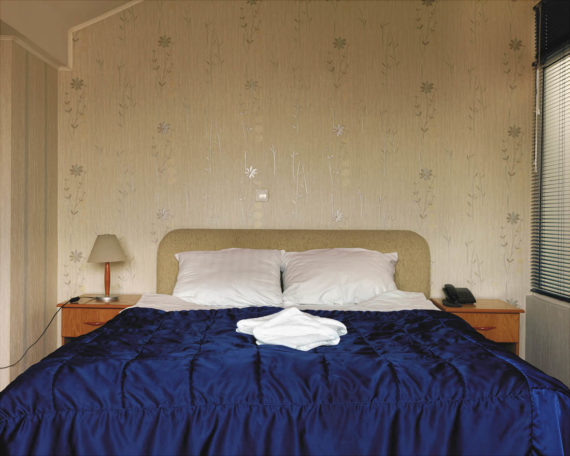 In your talk together at The Frontline Club, you mentioned some of the bizarre and grotesque stories of the CIA misidentifying suspects and so on. How important is the idea of individual testimony in this work?
Very important, in a number of ways. Individual voices or testimonies are heard throughout Negative Publicity. There is testimony from individuals who suffered – the bodies in pain of the previous question. These appear, for example, in pages reproduced from the New York University Law School report, Surviving the Darkness: Testimony from the US Black Sites, and in the drawings by Mohammed al-Shoroeiya of confinement and waterboard equipment he experienced in a CIA prison in Afghanistan.

Another form of individual testimony features in the cross-examination in court of the president of a company that leased planes used for extraordinary rendition. Elsewhere, a Lithuanian border guard testifies that he was prevented from inspecting a newly-landed plane by state security personnel. The memorandum written by Jay Bybee and John Yoo defining what enhanced interrogation techniques are and how they could be interpreted as not amounting to torture can also, perhaps, be read as a form of testimony.

I write in the foreword of trying to make sense of four years spent tracking and photographing sites of extraordinary rendition. I have witnessed nothing during this time, but the making of these photographs became an act of testimony. It was not possible to see the secret journeys of extraordinary rendition or the interrogations that punctuated them, but it has been possible to glimpse the places and networks that circled them. 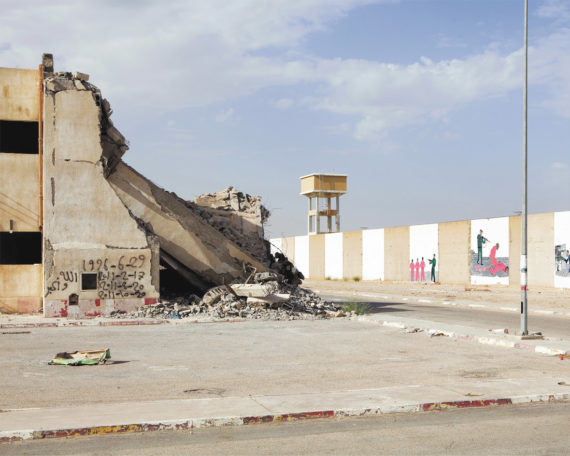 Eyal Weizman writes in the afterword to the book about the material processes that create secrecy and the subsequent attempts to leave no trace. What do you make of photography’s ability to unveil this mask? Does it have sufficient power in and of itself or is the augmentation through text essential?
In theory I don’t see why the right images could not unveil the mask of secrecy. But I think photography can only reveal the mask. It is the limit of photography. It can’t reveal secrets but it can prompt the imagination to explore what is behind the mask. Text and documentation have always been central to my work. My exhibition at the Imperial War Museum is a dialogue between image and text that combines the two in a variety of forms and scales. The use of scale relates global or geopolitical events to everyday, domestic and personal experience. There is one piece called Orange Screen: War of Images that recalls iconic images of key events in the war on terror by reconfiguring them as rectangular shapes made up of words describing the images. It is … intended to make the viewer re-remember these events and images.

While the changing nature of warfare has prompted new ways of ‘seeing’ as well as new forms and languages to tell stories, do you feel there is still a place for frontline images, images of violence or suffering?
I think there is a place for any type of imagery if it is effective in communicating something appropriately. This depends on the role and intention of the creator, curator or appropriator and the context in which the imagery is presented to an audience. 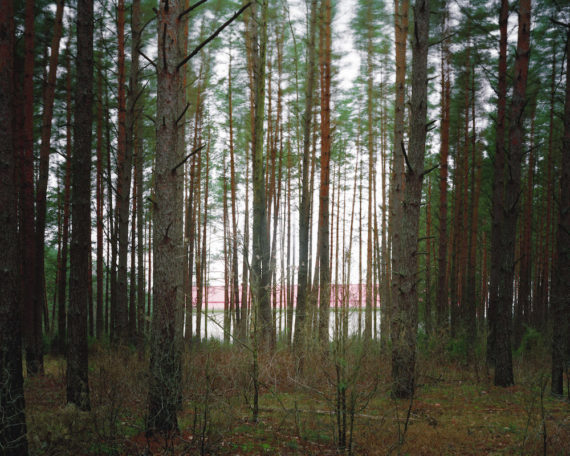 What are your thoughts on how the press deals with these subjects and situations?
Some journalists and publications have been prominent in revealing details of the processes and locations of the rendition, detention and interrogation programme – and in seeking some form of accountability from governments. Other publications or organisations have promoted a climate of tolerance for, or acceptance of, measures that are illegal and arguably counter-productive. As a whole, ‘the media’ (broadcast media, the press, internet, social media) is part of the war on terror. It is the platform where the war of images is contested.

Negative Publicity: Artefacts of Extraordinary Rendition has been published by Aperture/Magnum Foundation aperture.org