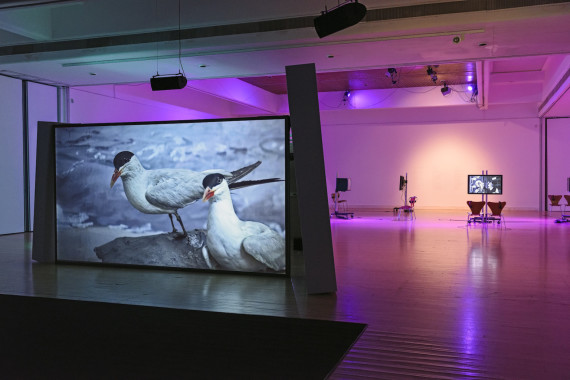 Working with live art, film and photography, Gerard Byrne’s research is rooted in the presentation, manipulation and perception of narratives. Widely exhibited internationally, in 2007 the Dublin-born artist represented Ireland in the 52nd Venice Biennale in 2007, showing again in the 54th edition in 2011.

Having shown in major bienniales in Gwangju, Sydney, Lyon, Auckland, Kassel and Istanbul, his current exhibition, 1/125 of a second, at the Mead Gallery, Warwick Arts Centre, Coventry, brings together existing works with a new film, Jielemeguvvie guvvie sjisjnjeli – Film inside an image (2015).

Commissioned by the Mead Gallery, Monash University Museum, Melbourne and Moderna Museet, Stockholm, the new work is shot in Stockholm’s Biologiska Museet, the first natural history museum in the world to construct a vast panoramic diorama of taxidermy specimens lit only with natural light. 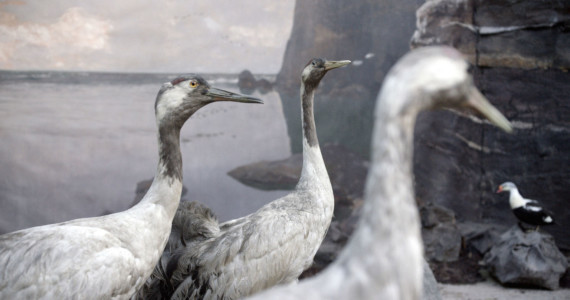 How did the Biologiska Museet project begin?
I first visited Biologiska Museet in 2006 and it provided an experience that stayed at the back of my mind. I stumbled into the museum; it’s very under the radar. The diorama is lit only by natural light from the roof and that’s really significant in Stockholm. When I was first there in February or March – I’m pretty sure I was the only person there – it wasn’t dark but it wasn’t bright, and the roof of the museum was covered in snow, creating a very particular light. I’m not trying to mystify it but there was something bizarre going on – light was a palpable player in the experience. This directly informed what I ended up doing. When I made the film, it would have been difficult to synchronise the weather with the exhibition commitments; the snow is only relevant to my initial, concrete experience of the place. Light is a material consideration but the work is not about capturing a particular character of light or whatever.

When did the Mead Gallery become involved?
I was invited by the Mead Gallery to do a new commission, probably five years ago, and I decided Jielemeguvvie guvvie sjisjnjeli – Film inside an image was the project. The Biologiska Museet is of particular interest to Moderna Museet as they’re geographically close. It’s not just a professional convenience – there’s something intrinsically interesting in the gesture of a film about the Biologiska Museet being shown in Moderna Museet [the exhibition will tour there in 2017]. The Biologiska Museet is not physically neglected but it’s underfunded and under-resourced – it’s a spectacle that’s a complete anachronism and as such, it’s hard to generate an audience. The work will hopefully be of benefit, highlighting its significance locally. 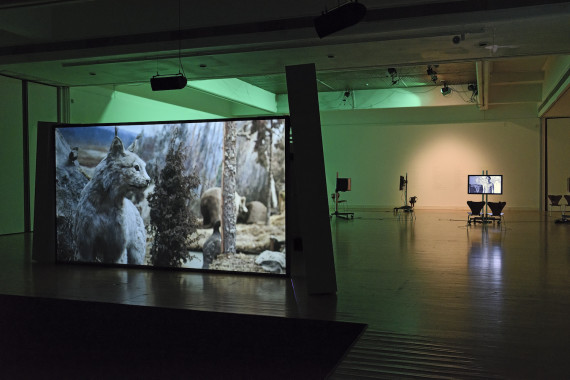 Locations play a key role in the other films shown…
There’s a general sensibility or pattern across different projects about recovering value from outmoded situations or things that have been discarded – proposing critical value in the act of salvage. Place is at play in Subject [2009] and New Sexual Lifestyles [2003]. The [Goulding] Summerhouse in the former and the brutalist Leeds University campus in the latter have more significant roles than merely locations. The more specific sense of place is a revelation which is a little bit new to me – its trigger is the new work as it’s so specifically bound to a location.

It’s quite unsettling hearing living sounds with glass-eyed specimens. How was the sound produced for the new film?
The sound is made from field recordings and online sound library sources. Recordings were made with sound designer Moritz Fehr who works with ambisonic sound, a type of surround sound first developed, I think, by the BBC in the 1950s. Computing now makes the process easier. Microphones record sound in all directions simultaneously and software generates sound based on these channels. Moritz has made sound for another diorama and it seemed obvious we should work together. I also had to figure out whether I needed sound at all. There’s no sound in the diorama but I decided to try it. I had been through all sorts of scenarios, like putting actors in the space, but stripped everything back again. The sound is quite provocative. It draws something out of the image. I work with artist Sven Anderson too. I’ve worked with him for a long time – he’s very good technically. Although I develop the content, the exhibition-making is collaborative and Sven contributes significantly to that.

How did you arrive at the film’s method of display?
It’s important that it’s a rear projection with ambisonic, 8-channel sound, housed in a free-standing structure. I promised myself I was going to make something that would be easy to exhibit at different places. A lot of my work is very difficult to show and that’s partly because I’m interested in the terms on which you encounter work and the gallery as a site. My projects complicate these relationships. I’m interested that it’s presented more like an object than a film screening even though its engaged with ideas around film. The disruption of the encounter or consumption of the film is reinforced by the film itself. There’s no drama in it – no explicit action. All the camera can do is go back to where it started. It’s anti-narrative in that sense. 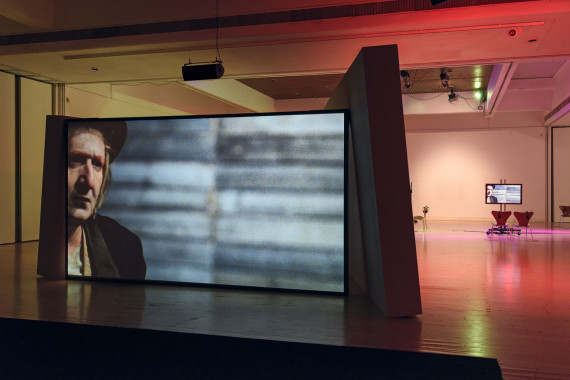 And that’s something you’ve done with He searches for the contrary of saved (2014), that’s played intermittently and simultaneously across every monitor in the gallery? The disruption of the exhibition space is quite dramatic.
That work is a filmed dress rehearsal of Waiting For Godot. It was made as an interruption to a Samuel Beckett film festival in Northern Ireland – made there and shown there. It’s taken on a role in relation to exhibitions – an interruptive gestural role, affecting tempo and tone, and our understanding of art as distinct works. The film dissolves that expectation.

There’s a connection to the slide projections of scale models of the summerhouse in New Sexual Lifestyles and the Biologiska Museet diorama…
There is a layering. Although the different projects are made over a period of time, what I’m doing through exhibition making is trying to actively work on relationships between things, using this as an opportunity to develop ideas. An exhibition isn’t just about displaying things. I’m trying to do something more ambitious than that.

1/125 of a second is at the Mead Gallery, Warwick Arts Centre, Coventry until 12 March 2016. www.warwickartscentre.co.uk/mead-gallery

The Syllabus – Rethinking educational strategies for artists by Anneka French