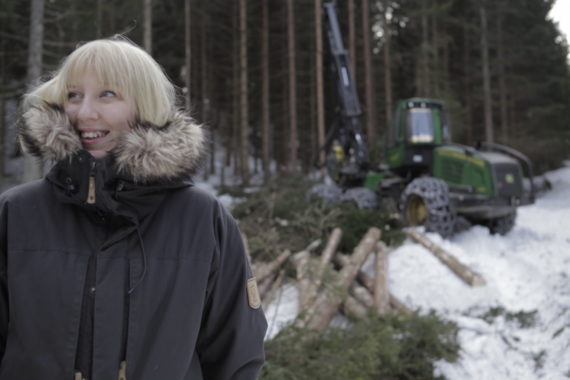 Scottish artist Katie Paterson has achieved international acclaim for her multi-disciplinary projects that mine the depths of the cosmos and the idiosyncrasies of planet Earth.

From music bounced off the surface of the moon, a phoneline to a melting glacier and an ongoing correspondence project recording star deaths, the Glasgow-born artist, now based in Berlin, has shown in major exhibitions at Tate Britain, Kunsthalle Wien and the Museum of Contemporary Art Australia.

Paterson’s recent sculpture, Hollow (2016), is a compendium of 10,000 tree species, while Future Library (2014-2114) is a 100-year collaborative project in which a forest will be grown to produce an anthology of authored texts that will be held in trust, unread, and published in 2114. Writers contributing to the project include Margaret Atwood and Cloud Atlas author David Mitchell.

The first monograph detailing Paterson’s work was released last month. Published by Locus+ and Kerber, and with essays from such notable figures as Nicolas Bourriaud, Lisa Le Feuvre, Mary Jane Jacob and Lars Bang Larsen, it explores almost 10 years of her practice via a ‘time-telescope’, considering works via seconds, minutes, hours, years and light years. 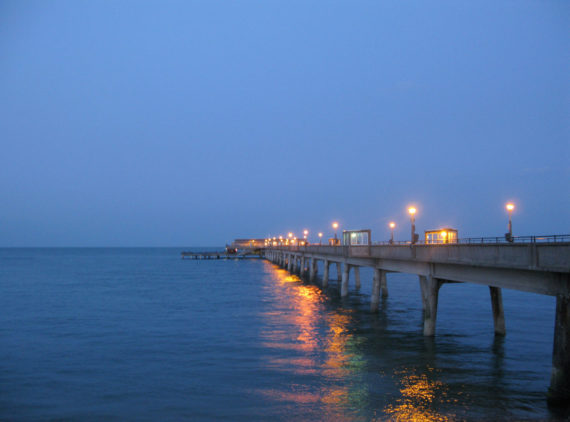 Your artworks frequently involve collaborations with expert researchers and scientists. How have you found the process of putting together the monograph with others? How much control have you had?
Making the book has been a really rewarding process. It’s involved a very close connection with the designers, Fraser Muggeridge studio, the publishers and editors Locus+, the essayists, Kerber and a whole range of collaborators who I’ve worked with in the past to create all of the works contained within. I’ve had a great deal of control and that’s due to the tremendous people involved. It’s been a process of both practically bringing together information, images, sources, from everything I’ve ever worked on – quite an intense process – and thinking on a more meta scale of how all of this information and these ideas come together in the experience of the book, and how this in turn reflects the experiences of the works themselves.

This lead to the concept of a ‘time-telescope’. I was working on the book at the same time as my solo show in Centre PasquArt in Biel, Switzerland, where I was also exhibiting just about everything I’ve made so far. So my mind was filled with a constellation of arrangements, a curation really, of the works in the physical space, and in the space of the book, both a kind of walk-through-soar-through journey experience in earthly and cosmic time and space.

It’s the first time I’ve confronted all my work in its entirety. I really enjoyed being inside this miniature universe of ideas, connecting the constellated dots, pulling them from the air down to earth. It was also a special experience to revisit all the people and places who have made the projects happen over the years. It has reinforced what a totally collaborative task it has been to bring all of these works into being. I’m blown away by the authors’ stances on my work. 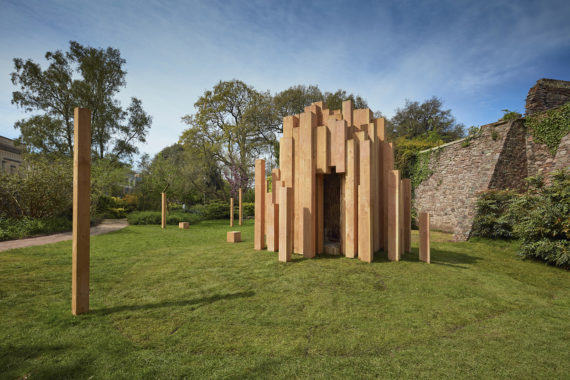 How have you distilled your complex and particularly expanded practice into such relatively few pages?
At the outset I was considering the opposite – how will my relatively small body of work come together in a monograph? 260 pages is a lot! Yet, it’s nearly a decade of work. I was pleasantly surprised by the scale and weight of the book. The realisation that there has been a lot condensed into this decade was eye-opening: forests, meteorites, candles, mirror balls, pianos, glaciers, deserts … Works got stripped back to all they needed to be. It quite neatly fell into the page range we’d first expected.

Can you tell me more about the ‘time telescope’ arrangement of works within your publication?
Rather than order the works chronologically in terms of the years they were created, I decided to work with the time element inherent in each artwork. So page-by-page the reader journeys through time. I extracted a numerical figure from each artwork, which describes its time element, in seconds, minutes, hours, years, light years. The book begins with a fraction of a second, which describes the time it took for the lightning to hit the lamps in Streetlight Storm (2010) and progresses through to infinity, which refers to the limitless darkness in the universe I collect for History of Darkness (2010).  The last work in the book is a black page from this series. There are 100 years for Future Library (2014-2114), 12 hours for the space-scented candles, one year for Second Moon (2013), one minute for the darkness projection on TV and so on. Page-by-page the book moves through time like a time-telescope, moving further and further away into the distance. The cover displays this ordering of time.

There is another little surprise within the book. If you look closely you will notice that here and there the full stops are shaped like Saturn and then it becomes clear every full stop is scaled differently, some almost invisible. We created a new font of planet full stops and they were replaced throughout the book, randomly. 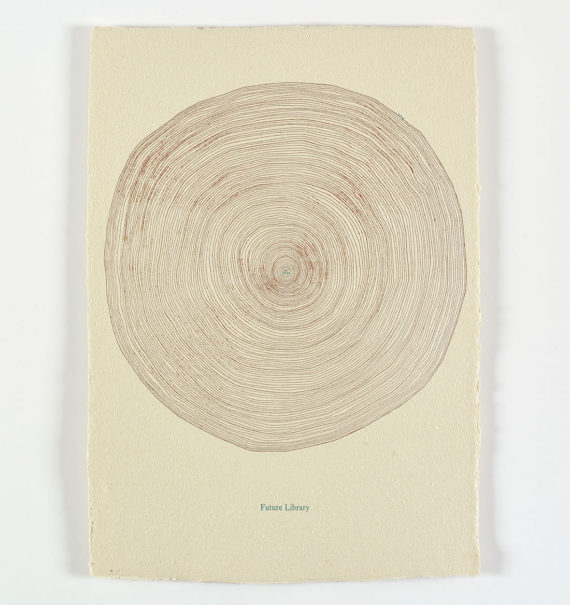 The publication notes for the book say it has been a chance for you to reflect upon your work at a slower speed. Has this then altered the way you now view your practice at all?
In recent years, I haven’t worked slowly. The pace has got faster and faster, and unfortunately, this doesn’t reflect the kind of content I work with: slow and vast expanses of time. My work and my way of living my practice has become out of equilibrium. So right now, I am slowing things down. We worked at a fair pace creating the book, constantly tweaking. I’m a complete perfectionist and the book design went through a lot of stripping back, and a great number of edits. Being able to reflect on every work created so far allowed an intake of breath: this is what has happened in nine years. Slow down. Take stock. Let each work have a bit of time to breathe, too. I have a tendency the moment something is ‘finished’ (though many of these works have no end …) of immediately moving on to the next thing. The book has shifted this approach for me.

Future Library is one of your most discussed and ambitious projects. How does your monograph approach this as yet unknown anthology of texts?
Future Library is my ongoing 100-year artwork that I will work on through my whole life: growing a forest to make a book. In the monograph, I approached it in the same way as every other work. That was a decision made quite early on in the process – each work would have the same weight no matter the scale. This was one of the many fruitful experiences working on the book, approaching every work together in its entirety – a kind of ecology – visualising the interconnection of every work. The time-telescope element took away any decision-making process, visually or otherwise, of how each work would sit next to one another page-by-page. The artworks are not treated in terms of a kind of ladder of progression either but in their own temporal terms. Future Library sits back to back with the moonlight bulb and the nano grain of sand: 66 years and thousands of years. 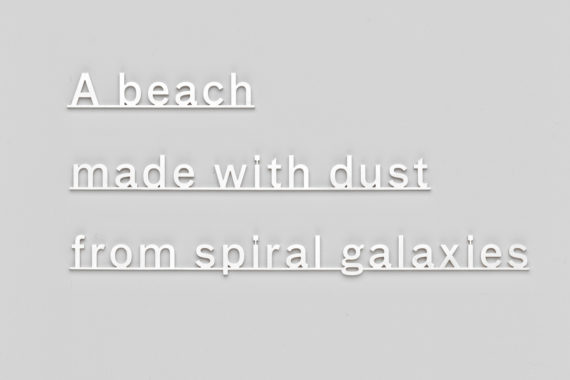 Text and the act of writing plays a key role in other works, such as The Dying Star Letters (2011-) and Ideas (2014-), and now within this publication. What value does writing hold for you and what are you working on next?
Everything for me starts with a pen and the magic of a blank page. Next I’m working on another book, or book-form, purely of Ideas. Around 150 or more works exist in the imagination. These short texts are scattered throughout the monograph in silver and are referred to in Mary Jane Jacob’s excellent essay. I have a lot of ideas. The form of the three-lined haiku-like text is something I’ve been working on for several years now. It’s how every work begins, as a few words, a few lines, and then they always loop back to those few lines, though often via circuitous routes. It’s another stripping back process, cutting away with Occam’s razor. Usually, if I can’t express what I need to in a few words, it’s not working. This three line text form appears throughout the monograph, describing the works that exist, that are yet to exist, or that may only ever exist through the mind.

Writing is a really important part of my practice, though it’s mostly hidden. Writing in just a few words; shaping and crafting words like a material. I can see the ideas very clearly but how to pull a few words out of millions available – and express something almost inexpressible – that’s a challenge. Though sometimes it’s as clear as water.

Katie Paterson’s monograph is available to buy from Locus+ 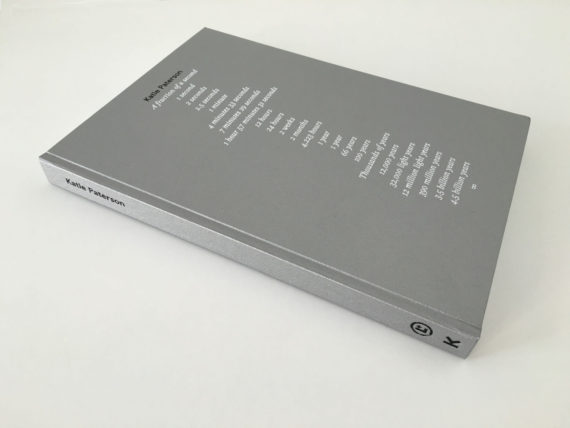