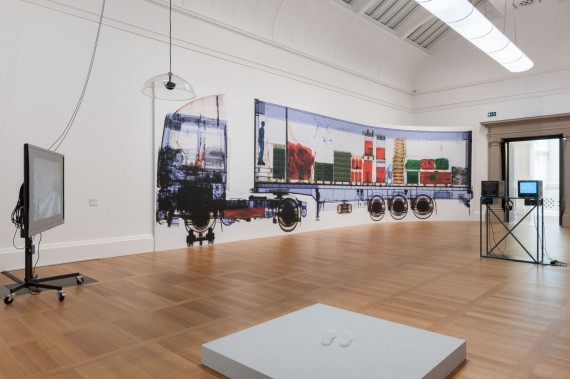 The Weight of Data is the opening exhibition in Tate Britain’s new Contemporary Projects series, a programme that will feature works by artists who are not yet part of the gallery’s collection.

Curated by Lizzie Carey-Thomas, the exhibition explores shared sensibilities and themes around the physical, tangible quality of objects and ideas and concerns of a more sensual nature.

The display brings together video, audio and digital print works by four emerging artists – Eloise Hawser, Charlotte Prodger, Katrina Palmer and Yuri Pattison. Each convey the physicality and human dimension of data, investigating the material world through the conversion of information from one state to another.

Carey-Thomas has worked at Tate Britain since 1999 where as Curator of Contemporary Art she curated the Art Now series, editions of the Turner Prize and worked with Nicolas Bourriaud on the exhibition Altermodern as part of Tate Triennial 2009.

What was the starting point for the exhibition? What usually comes first, the artists or the theme?
Very much the artists that I wanted to work with. I always try to start off by looking at artists’ work whom I’m finding particularly interesting at the moment and then look at the various connections and associations that I can find between their works. It was quite an organic process really. All of these artists I’ve been interested in for a while – watching and thinking about – and then just quite naturally there seemed to be some affinities and shared ideas that grew out of conversations with them. It’s quite hard to say what came first, but probably my interest in their work and then ideas I found running through all of them, that I found I could draw out by bringing their work together.

Can you say a bit more about the title of the exhibition, The Weight of Data?
The Weight of Data, it’s actually a phrase that Yuri Pattison used when I was talking to him about his work. His work is very much about trying to reveal the various structures behind the internet and the human labour behind it. Just in passing he used this phrase and I wrote it down. It kept weighing on my mind and I thought, actually, it’s a very good way to describe what is different about the way these artists are working.

The Weight of Data seems like a very apt title because there’s of course a slight play on the idea of weight – physical weight, does data have any weight? – and that links back to a news story that was around a few years ago where various scientists were trying to measure the physical mass of information on the internet. Some were believing that there was a physical weight to that information and trying to find things in the real world that we might identify with to compare it to.

Human physicality and time is present in all the works, can you say more about the importance of these themes?
I keep describing it as a sculpture show without objects and that’s very much how I view it. All of the artists are interested in physical, tangible, sensual ideas or concerns, in a way that more traditional sculpture is concerned with. Eloise Hawser, in her video Sample and Hold, put her father through the process of being 3D scanned. She ended up with this very instant geographical map, if you like, of his body which she could then manipulate and animate. In a way she’s very deliberately taking this subject that she’s emotionally bound up with and then through this process of mapping ended up with the material of that subject, which she can reproduce infinitely as she likes.

That relates, for me, to Charlotte Prodger, because her work is also involved with moments of intimacy that you can find within the vastness of the internet, so again, the internet being this infinite resource that’s potentially limitless and boundless but then zoning in on these moments of physicality within that.

Katrina Palmer is interested in using narrative and storytelling as a means to conjure these incredibly intense visceral scenarios in your mind’s eye and Yuri Patterson is interested in the internet as a physical place and filmed inside Pionen which is a data centre in Stockholm. It’s been taken over by Bahnhof AB who host the more maverick end of internet provision such as Wikileaks and Pirate Bay.

What were the most important curatorial decisions for you in the making of this show?
For me what has always really been key is the way the works are installed in the space, I think that’s absolutely imperative and this exhibition was quite tricky because of course there is so much video. Until we were actually installing it, I wasn’t sure how those video works would function together, but what I’m really happy about is they each have an object-ness. They are their own presence. When you put them together in the space, it worked.

How do you hope this exhibition will have an impact? What do you hope the public will take away with them?
I hope it has a currency to it and although these are very specific ideas the artists are interested in, I think they also relate to all of us right now. This funny space that we all reside in where we have bodily disconnection in the way that we communicate online. I find it quite an uplifting show in this desire to constantly bring it back to something physical and tangible and material that relates to our sense of being bodily and in the world.

You’ve been a curator at Tate for over 15 years, what is special to you about working there?
I think the context of Tate Britain really appeals to me in that I don’t see it as a nationalistic restriction. I view it more as ‘Tate Local’, in that it’s about having a very strong relationship to artists who live and work in and have a relationship to Britain. Britain of course is a peculiarly evolving definition for the people who live here – particularly in London. That really appeals to me and it also appeals to me that for the artists that I work with there is a very positive attitude to showing against the context of 500 years of British art – to having a history and a collection and responding in some way to that.

The Weight of Data continues until 25 October 2015 at Tate Britain, London. www.tate.org.uk