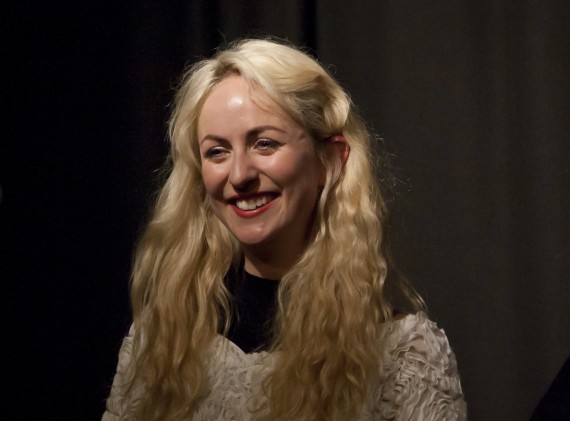 Marianna Simnett‘s films are not easy to watch. They can make your skin crawl, your stomach churn, your eyes water. Her latest film, Blue Roses, is no exception – at a recent showing at the Serpentine Pavilion, two audience members fainted. (“It was so spooky,” says the artist, “people thought I’d orchestrated it.”)

The 13-minute work, commissioned by Comar on the Isle of Mull, includes a medical procedure for the removal of varicose veins and footage shot at the University of Texas showing cockroaches controlled via electronic implants.

With Simnett herself as its central character and a cast that includes a surgeon and a mechanical engineer, Blue Roses cuts between intense reality and unsettling fantasy, employing deft editing and exploding prosthetics. “The premise is that I’m inside the vein looking at my own worsening condition in my knee,” she says.

Simnett creates her own props and music for her films. She never works with actors, and the process of finding and convincing people to be involved in a project can be time consuming.

“They have to trust me, because I’m asking them to do some pretty wacky stuff. When they first meet me they’re thinking ‘Who the hell are you, what are you doing?’ But then they can see the integrity behind it.”

Selected for the 2014-15 Jerwood/FVU Awards, Simnett used the bursary to produce the films The Udder (2014) and Blood (2015). “The award gave me that bit more support, to do something bigger and more substantial, which I’ve always wanted to do. It’s enlarged my whole practice.”

What inspired you to make Blue Roses?
The title stems from an incident when I was a kid and I called my mum’s varicose veins ‘blue roses’ and got told off for it. It’s a memory of something that I thought was beautiful but turned out to be a sort of horror. I was also interested in the idea of ailments that are seen to be ‘optional’ illnesses, that crossover into issues of vanity or beauty. This relates to my film Blood, which includes the removal of the turbinate bones in the nose; it’s an operation that took place on one of Freud’s patients, Emma Eckstein, in order to relieve her period pains. So it’s to do with questioning what needs to be done and when.

As well as featuring a surgical procedure, Blue Roses also includes ‘biobot’ cockroaches.
The cockroaches are about this emphasis on looking at technologies that are crossing over with things that might be called natural or biological – there’s something similar in my film The Udder, which relates to changing from natural agricultural processes to more technology-based ones. With the biobots, something is being turned from an absolute nightmare into potential heroes that can save us from earthquakes and be sent to places that we can’t access.

Cockroaches, needles, blood – they’re all things that people have phobias about. Is that something you’ve thought about, is there a taboo-breaking element to what you’re doing?
No, I don’t feel it’s breaking a taboo, it’s just portraying something. I talk about violence and the body being violated because that’s what I want to talk about, and it seems to me that a lot of people respond to these visceral forms. And it interests me what you can do with a screen, when you know what’s going on isn’t real but it somehow affects you psychologically. It is quite micro the things I’m asking people to look at – like, look at that vein on the back of my knee, now keep looking and watch it grow. It’s places that people don’t often look at, places that are part of us but that we’re alienated from.

When you make your films do you have a particular gallery context in mind?
Yes, very much so. I always tailor-make the work to a space and I always get a bit annoyed if I have to show it online because I don’t think it works at all. There’s something about a collective experience – when I show Blood, people are holding their noses because there’s something going on between this nose operation and the bodies in the room. It’s really important to keep that in mind when making something – it definitely isn’t laptop work.

There’s an intensity, a particularness about your films that makes it feel very personal. Is having a close connection to a subject important?
It is, but I’m lucky that I’ve been doing it long enough for me not to need to revert back to memories, I don’t need to dig into childhood diaries. It’s whatever I feel strongly or viscerally about – there’s definitely an aggression, a spikiness in what I’m doing, and that has to come from a personal place and not an academic or cerebral place.

You recently presented a performance at the Serpentine Pavilion that incorporated Blue Roses and elements of your films Blood and The Udder. Is there more live work planned?
The Serpentine was an eye opener, it was just so wonderful to see the work transform with that space. I really want to do more live work because of it and I’ve been talking to people about something along the lines of a musical. Not to feel sorry for myself because I certainly put myself through it intentionally, but every single video drains me in every possible sense; financially, bodily… I can work on a film for 24-hours a day and I have done six all-nighters in a row to get something done. I have this OCD attitude which means I just don’t ever stop, which is probably just bad in terms of sustaining an art practice. Live work alleviates some of that isolated tension that I get when I’m making a film. It’s something I need to think about on a personal level – just how I’m going to keep doing this for the rest of my life.

Blue Roses is showing at Comar, Isle of Mull, Scotland until 24 October 2015. www.comar.co.uk

For more Q&As, use the Q&A tag