A Q&A with… Mitra Tabrizian, photographic artist with an eye on the margins - a-n The Artists Information Company 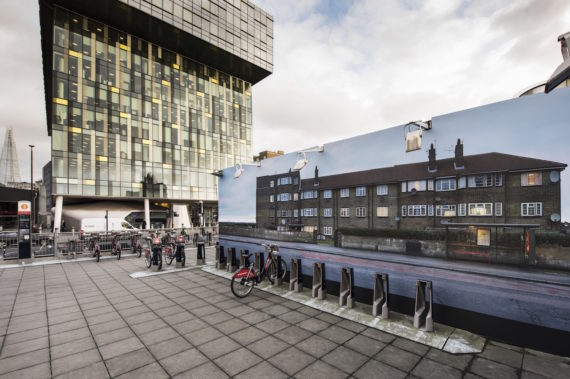 Consisting of just two landscape images presented on large advertising billboards outside Southwark underground station, Tabrizian was commissioned to produce the work to coincide with the introduction of the new night tube service.

Her response, she says, was to use the project as an opportunity to focus on the subject of night working and people who “live on the margins” – in the process bringing those often regarded as peripheral “to the centre of the city”.

Tabrizian’s research involved interviewing around 20 night workers in order to better understand their experiences, and many of those she talked to were immigrants. The artist – who has exhibited widely including the Iranian pavilion at the 2015 Venice Biennale – herself moved to London from Tehran around 30 years ago.

The title of the billboard work, you don’t know what nights are like?, is taken from one of her interviews with night workers. Other excerpts are presented in a free pamphlet that also features an essay by Eleanor Pinfield, head of Art on the Underground.

“The relation to the night trains is very tenuous,” says Tabrizian. “A lot of these people who are running the city’s infrastructure are migrants so it’s very timely; they’re running the city and yet we are trying to get rid of them.”

As well as her photographic work, Tabrizian has just completed her first feature film, Gholam, about a night-working Iranian taxi driver in London.

There are just two images – albeit on huge billboards – for your Art on the Underground commission. Did you select down or were these always the two images you wanted to make?
From the outset I knew that I just wanted to create two very impactful, hopefully powerful images. So I didn’t bother experimenting with various different approaches and other shoots. Having said that, deciding on the two particular images those billboards would have was a bit of a headache! I was constantly going back and forth – should I take a more abstract approach, what should they say? There was a lot of thinking around what those two images would be; I had to design the images, and some of my training in film helped – it’s almost like you write the script and then you go for it to try and visualise it.

The work includes a pamphlet featuring extracts from interviews with London nightworkers. Can you explain the significance and importance of this to the commission?
I think it’s important for the work that people see the fragments of conversations as well as the actual billboards. Some of them are very touching, very emotional, and show the effect, the impact on their lives [of night working]; they are losing their connection with their families, their friends. The fragments of the interviews tell the story, it gives the emotional aspect that I was looking for. That was important to me because without that it becomes abstraction for abstraction’s sake. So I was quite careful when I was selecting the text because you have to think about a lot of things when you’re trying to use just a few lines and you want the reader to become aware of these stories and identify with them. I didn’t want to portray people as victims, because their resilience puts them in a different category. I wanted to draw attention to how significant their contribution is and that they deserve acknowledgement. 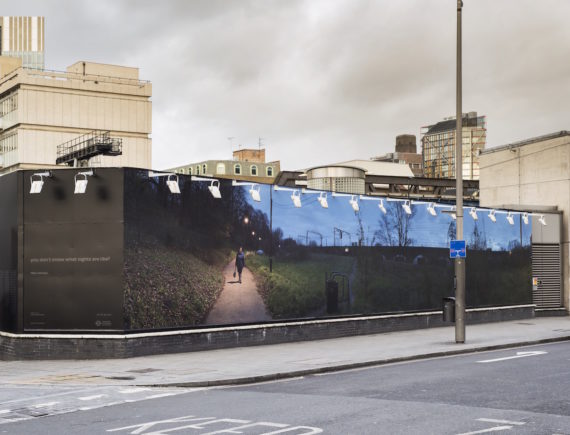 Can you talk about the two images and their relationship to the text?
I wasn’t interested in a one-to-one relationship between image and text, it was more like a sociological approach; not the personal, not ‘this is their story’. It’s a desolate London [in the images], a London that can be quite alienating. That’s the kind of idea I had, of moving to abstraction but also putting the text there and hopefully people read it and make up their own minds about the relationship between it and the billboard images.

The figure in the one photograph is someone I interviewed. She’s been living in the UK for 20 years or so and working as a security guard for 15 years, doing a 12-hour night shift. She says she kind of likes it really, but what was interesting was that she said: ‘I never ever felt visible because I’m working at night. And even in the place I work, people might be nice but they don’t notice me.’ So this idea that she’s now on this 10-metre billboard in the centre of the city, she was in tears almost.

The image of the council flats building is eerie and unreal – there’s something almost gothic and castle-like about it.
With the building, I didn’t want to duplicate the desolate landscape, it was more about a building standing on its own almost as if it was a character, rather than the figure being a character. The image of the building is actually a composite of a few images, although it is one building believe it or not. What we did was quite a technical challenge, trying to show the whole of that building almost straight on, while also trying to isolate it from its surroundings. So when on the left of the picture you see just the sky, it’s all real but if there were buildings in the background I got rid of them. 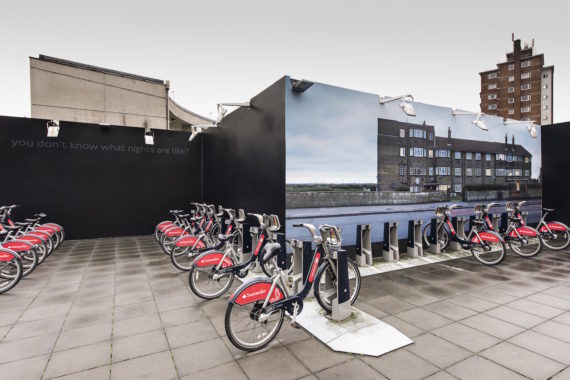 What effect, or response, are you trying to create with the images?
I wanted both the images to almost create this idea of living on the edge of the city, which [in turn] reflects the voices in the texts. Both the images are shot in London but it’s the London you don’t normally see. I didn’t manipulate anything within the images, I just made sure that I was shooting as much as possible to show the scale of the landscape and to fill the billboard as well. Both images have a sense of alienation and of early in the morning, because that’s when the workers come back home. These are the things I was trying to do. What’s interesting is that people who look at the images think it’s outside of London, that it can’t be London. There’s this idea that the images work as an allegory for marginality and living on the edge and being invisible – the London that is invisible and the people who are invisible.

In an abstract yet powerful way, the two images seem to offer an alternative narrative to the one we so often hear about immigrants – as a drain on society, as ‘benefit tourists’, etc.
Well yes, precisely. We all know that people work at night and we all know that the city is run [by them] one way or another, but when you are directly listening to these stories it’s like, Oh my god, the impact of this, on their health, their relationships – it’s astronomical. And at the same time, they show such extreme resilience – I mean, I wouldn’t be able to hack it! And yet they keep their sense of humour. They still keep going. 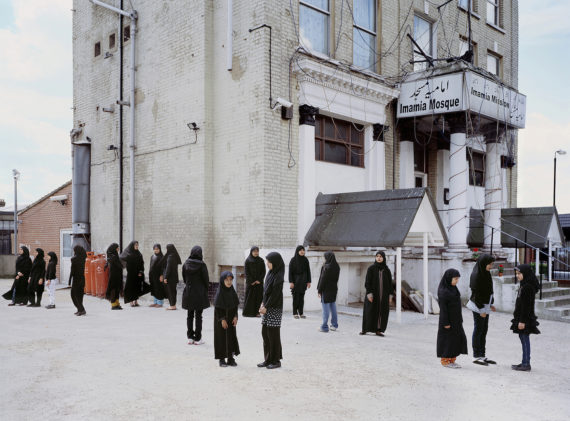 How does this project relate to your other work, particularly in terms of the subject matter?
The idea of marginality has always been running through my work. [For example] Another Country, which focuses on Muslim communities that have been in the UK for maybe 70 years and yet still feel like outsiders, still feel that they are not acknowledged. So that subject interests me a lot – that’s where this is coming from. I wish I could claim an experience of nighttime working and that I was drawn to it but I can’t. I have a lot of time for people who are hanging in there and yet they are not complaining as much as the rest of us.

Mitra Tabrizian’s you don’t know what nights are like? continues at Southwark underground station on billboards at The Cut and Blackfriars Road and will remain through to 2018. art.tfl.gov.uk 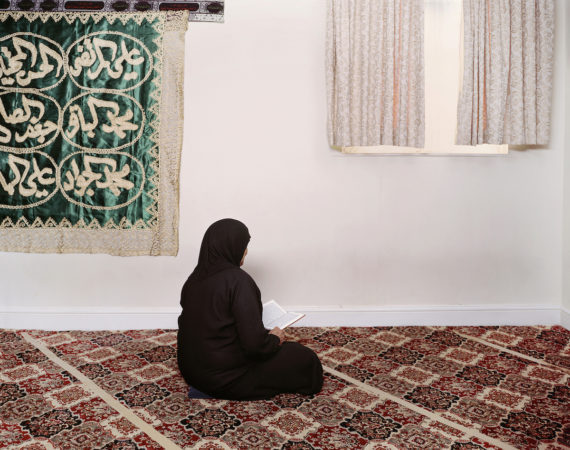 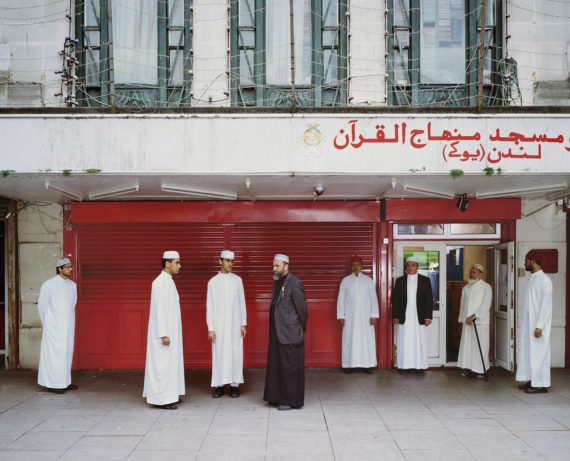 13 February 2017: At the request of the artist, some amendments have been made and additional text added to her originally published answers