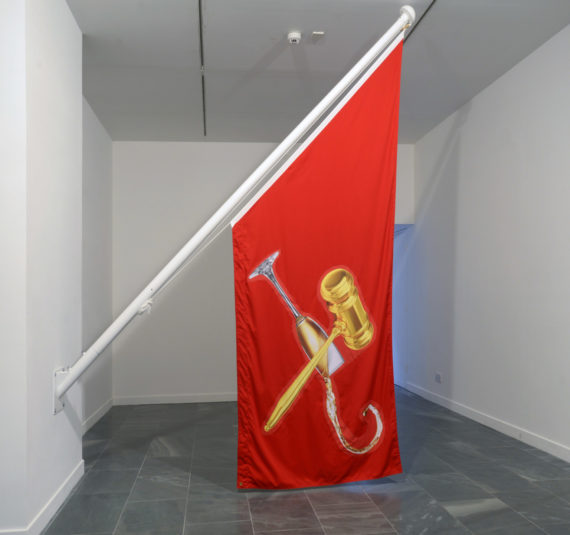 Featuring ink drawings of 144 objects sold at a variety of historically significant auctions – the 2010 Lehman Brothers sale; the first auction by Christie’s on mainland China in 2013; the 2015 sale of former prime minister Margaret Thatcher’s personal items – the show maps out an imagined global narrative that includes the London-based artist’s home country, the Philippines.

The exhibition also features 100 replicas of one of Thatcher’s handbags, the original of which sold for £25,000 in a 2011 charity auction organised by former Conservative party deputy chairman and convicted perjurer, Jeffrey Archer. The replica bags, made in the Philippines in a city that once had a thriving leather manufacturing industry, form a brooding installation at the end of the exhibition. 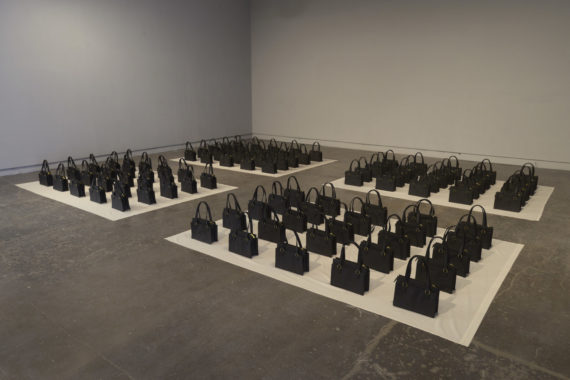 Drawing on both extensive research and family history – Abad’s father was a student activist in Manila in the 1980s and later became a Liberal government minister – the show’s title, ‘Notes on Decomposition’, is a literal translation of a book by the Romanian philosopher Emil Cioran, Précis de decomposition.

“The title is key,” says Abad, explaining that the exhibition begins with a red hammer and sickle flag, the hammer replaced with an auctioneer’s gavel, the sickle an overflowing champagne flute.

“Cioran’s book was written after the second world war but before the cold war was fully in place, and it talks about people’s inability to remember and the dangers of ideology. The text is just so potent given where we are at the moment – we’re at a seam of something, and we don’t know what. A fraying seam.”

Can you explain more about the significance of the ‘hammer and sickle’ flag and how you feel about the political and historical change embodied by it?
What I’ve tried to do with the show is find an eloquent way of stating my disenchantment with things; trying to explain that personal sense of disenchantment through a kind of enjoyment of making. But it’s not a nostalgia for the ideology that original symbol represents. It’s about being stuck between two problematic ideologies. It’s like we’re in this particular state where a certain type of ideology [neoliberalism] has clearly failed but the one that will replace it doesn’t seem to exist at the moment… it’s like, what works? 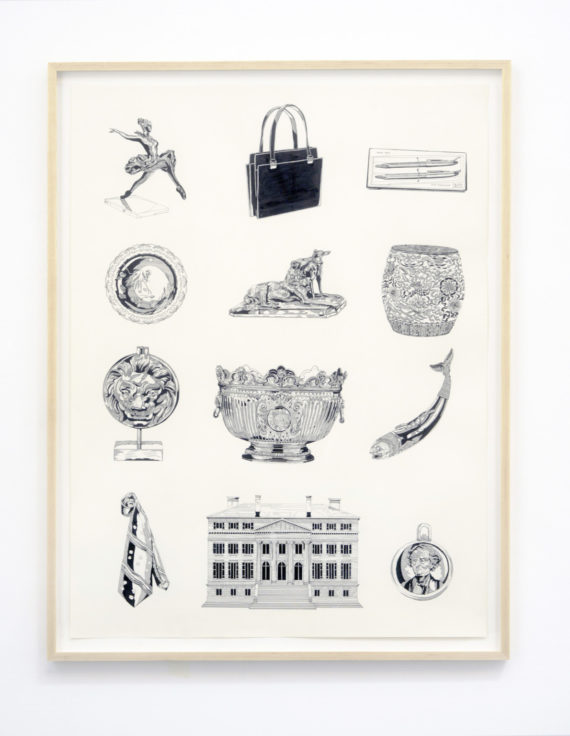 Why Margaret Thatcher’s handbag – what’s the fascination?
It all goes back to this idea of finding the domestic in power. The title of the piece is Not a Shield, but a Weapon, which is a quote from [former Tory minister] Edwina Currie about Margaret Thatcher and how she used to place her handbag on the table when the cabinet was meeting – the handbag means business. That idea of a domestic object becoming a potent tool for power has, I guess, always informed the way I go about my practice; also the way that figures of power are reduced to certain icons. Before this show, a lot of my research has focused on Imelda and Ferdinand Marcos [president of the Philippines, 1965 to 1986] and the reduction of a very painful part of Philippines history into a stiletto heel [Imelda, the president’s extravagant wife, famously had a huge collection of shoes]. There’s a kind of violence in reducing a whole historical narrative to one object, and the same goes with the handbag and what economic policies and political alliances were actually contained with that bag.

You could say that Thatcher is the archetype of that idea of the public politician making a political virtue out of their domestic credentials.
Yes, and it seems to be a political character that exists again, such as Donald Trump. These [politicians who say] ‘I’m like you, I understand what you’re going through’, when in reality they are just part of a formidable power structure that [voters] are beholden to. 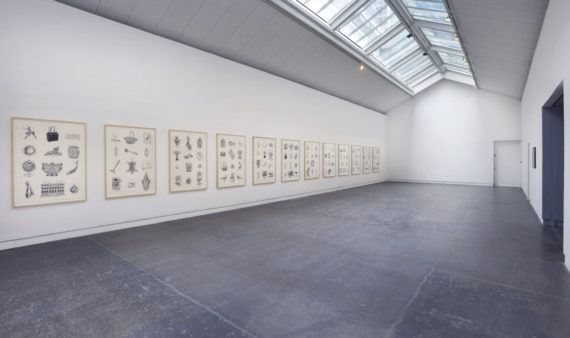 You grew up in Manila, moving to the UK to study at Glasgow School of Art in 2004. So when did Margaret Thatcher enter your orbit?
Just in beginning to think about this show. The last four years of my projects have focused largely on Philippine history, but in trying to understand that you realise that the Marcos regime was this combination of neoliberal government pushing these shady characters to prevent an onslaught of the ‘red scare’… And I guess if you expand that narrative further, inevitably Thatcher and Reagan become the puppet masters in this global history.

The 144 objects you’ve drawn were all sold at politically significant auctions, and there’s clearly a process of historical mapping going on with the drawings themselves and the list of the objects and where they were sold.
The auctions took place from 1991 to 2015. So 1991 is the auction of silverware that was sequestered from the Marcos’s after they were chased out of power in ’86, and 2015 is the Thatcher auction at Christie’s; the handbag was sold at the 2011 Jeffrey Archer charity auction. So I like this idea of creating an absurd map that links Jeffrey Archer to a fading manufacturing industry in Manila through the bag and the Thatcher narrative. I try and expand the act of mapping this history to a ridiculous extent, trying to connect everything. So the show starts with the flag and brings you to this expansive collection of objects, of which the Thatcher handbag is one. Then that bag is multiplied 100-fold so it zooms it back out to a larger network of global relationships. There’s a constant kind of zooming in and zooming out. So the bag, as much as it is a human scale object, is also a geopolitical icon. 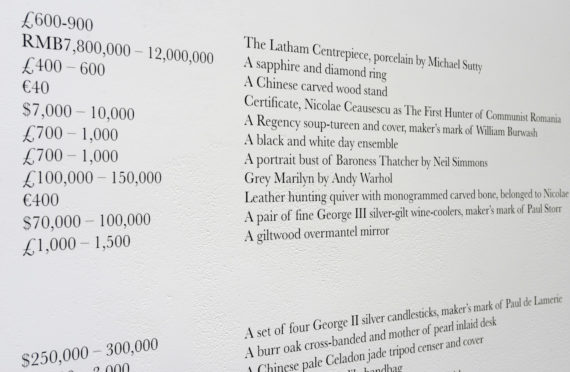 Making the replica bags in the Philippines is clearly key to the narrative you’re creating?
I’ve always been interested in the city of Marikina [near Manila] because it was a thriving leather manufacturing industry and there’s a possibility of working with that narrative somehow. And I was interested in the idea of a Thatcher handbag that was famous for being photographed in a particular meeting with Ronald Reagan in 1985, selling for £25,000 in the Archer charity auction. The leap to the Philippines is quite a leap, but at the same time the death of the manufacturing industry in that city was a result of the Philippines joining the World Trade Organisation [in 1995], so it’s a direct cause of possibly whatever Thatcher and Reagan discussed. So it’s a mixture of actually quite linear economic policies and an imaginative reading of historical possibilities.

There’s a small photograph as you go in to the main gallery space. What’s that of?
The photograph is of the living room in the presidential palace in Manila, taken in 1986 hours after the Marcos’s had fled. And it was taken by my dad; there’s a thumbprint on the photo that shows it’s been enlarged. My dad was a student activist, and they were just the first wave of protestors who were allowed into the palace. It’s a personal document of that exact moment when political institutions collapse and you’re privy to the private life behind it. 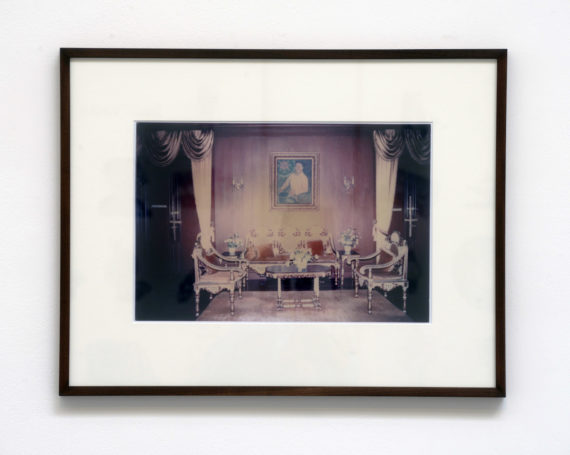 What comes first, the object or the politics and history attached to it?
I think both. My work is always informed by an outrage with the history but also being seduced by the objects, and they constantly fight each other out. I think that’s where the work happens… the work just visualises that struggle. Even as I attempt to address these larger issues there’s always a self-reflexive history taking place within the work. You can only infuse these histories and objects with your own history and then possibly offer another reading of it. And also present problems that you will probably never be able to solve.

So it’s not a very hopeful exhibition?
No… I don’t think these are very hopeful times. But if there is one note of hope, the installation [of handbags] actually continues beyond the show, and they’ll be for sale on the CCA website for the exorbitant amount of £25,000 each. And the majority of those proceeds go back to the manufacturers, not as an act of charity but as a kind of weird interpretation of the disproportionate bonus that [some] people get, but instead of it going to people who speculate on the value, namely myself or CCA, the bulk of the proceeds go back to the people who manually produced it. So maybe there is a glimmer of resistance there. 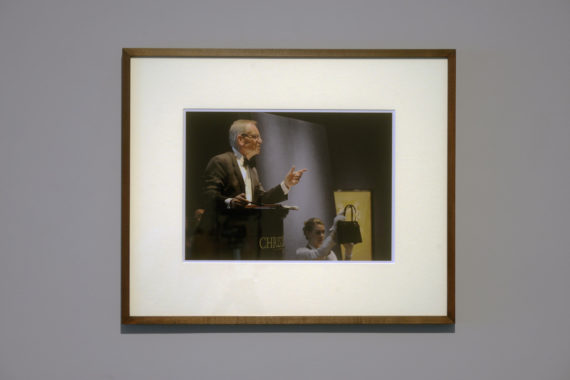