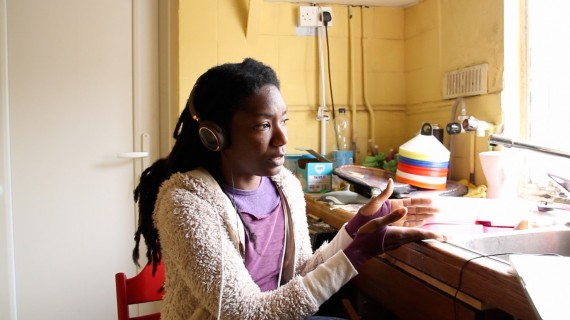 “It’s one of the most profoundly significant documents of recent British history,” says Rabab Ghazoul, as she explains her fascination with Tony Blair’s 2010 testimony to the Chilcot Inquiry. “But apart from the soundbites, people aren’t really familiar with it.”

Blair’s 189-minute justification for the invasion of Iraq is a masterclass in political obfuscation and spin – not to mention cleverly choreographed hand movements. But in Ghazoul’s three-channel video piece, It’s a long way back (Chilcot/Part 1) – part of the Iraq Pavilion’s Invisible Beauty exhibition at the Venice Biennale – the former prime minister is conspicuous by his absence.

Instead, what we see are a selection of people from Cardiff – where the Iraqi-born artist has lived for the last 22 years – variously voicing, explaining or just listening to excerpts from Blair’s evidence. Occasionally, we catch the tinny, just recognisable sound of a voice leaking from the headphones, like a ghostly visitation from a time that continues to haunt us.

Ghazoul’s piece is presented on three video monitors placed throughout the elegantly simple domestic spaces of the 16th century Ca’Dandolo. It plays a pivotal role in Invisible Beauty, which is curated by Philippe Van Cauteren, artistic director of S.M.A.K, Ghent, and commissioned by the Ruya Foundation.

By putting Blair in the frame through the lens of ordinary British people, the videos provide a link between work by the other four artists in the show referencing both the better days of an Iraq before Saddam Hussein, and the post-invasion slaughter and chaos of today.

“I was making work that directly addressed Iraq’s recent history, and some of the root causes behind the unfolding of that history,” says Ghazoul. “I felt happy with that.”

How did your piece for the Iraqi Pavilion come about? Was it commissioned specifically for Venice or something you were already working on?
It wasn’t strictly commissioned and neither was it work I’d already made. The show’s curator came to visit me around October last year as part of a lot of visits to artists both in Iraq and elsewhere. I spent the day with him, showed him my work and we talked. I’d just finished a period of research and development around the Chilcot Inquiry project, something I’d been exploring the previous year. When we met I’d just started filming – I had the first rushes of filming with three or four people. We talked about this new work, and then he came back to me in January and said: ‘Where are you at with that work you talked about, we’d really like that for the pavilion’. Then it was just a mad scrabble to get the piece done in time.

As an Iraqi-born artist who has lived in Cardiff for over 20 years, what does it feel like be in the Iraq Pavilion?
It was daunting when I was first approached because this wasn’t a stage I’d operated on before, plus the work was still to be made – the other artists in the show had already made their work. In fact the work of photographer Latif Al Ani, for instance, took us all the way back to Iraq’s golden age in the ’50s and ’60s. I lived in Iraq in the 1970s and I can remember my mom walking around in mini skirts; it was a pretty open-minded place, very progressive in many ways. But the last time I was in Iraq I was ten. So being selected felt exciting, and strange in some ways. It raised the same questions I’ve often asked myself over the years: what does it mean to be identified as an ‘Iraqi’ artist? It’s a label I’ve resisted, but the ‘Iraqi’ bit is also part of me, I can’t deny that. Of course, the idea of one’s work representing a nation is fraught, and much has been said about this. What felt perhaps most fitting was that I was making work that directly addressed Iraq’s recent history, and some of the root causes behind the unfolding of that history. I felt happy with that.

What drew you specifically to Blair’s testimony to the Chilcot Inquiry for the basis of the piece?
It’s a document that, apart from the soundbites we heard in 2010 from Blair, people aren’t that familiar with. Yet I feel it’s one of the most profoundly significant documents in recent British history because of what emanated from Blair’s support for the war. I also think 2003 represents a point at which something broke in our idea of the democratic in this country – that our voices actually matter. I started thinking about this project over three years ago, and there have been points when I’ve thought, ‘What am I doing? Iraq is old news, no one’s interested’. When you’re making work like this the world is moving on so quickly, politics is moving on, and there’s a real question of whether the moment for what you’re trying to do has simply passed. In the end I decided I didn’t particularly care whether the moment had passed. Making the work on some levels felt like a form of cultural resistance – a way of saying, ‘Well, I want to go back, I’m not finished yet’. I think this, in part, is what our role as artists can be: to say, hang on a minute, we’re not done.

The piece involves three videos of people listening to or watching Tony Blair giving evidence to the inquiry. Blair’s testimony is 189 minutes long, but clearly you don’t feature all of it?
The original idea was to rework the entire testimony, via the voices of people living in my city (Cardiff). Thankfully, Philippe came back and said, ‘We can’t expect you to create the full 189 minutes in the time.’ That was a relief because it was clear I couldn’t produce the work to that scale before Venice in May. Its current manifestation is a three-channel video that takes extracts from the testimony: one screen shows people listening on headphones to the Blair testimonial whilst simultaneously repeating his words verbatim; another features people watching Blair on screen and describing what they see; the last records people’s responses as they listen to the testimonial.

How did you choose the people who are watching or listening?
Originally, I had the idea of working with Iraqis in the UK – asylum seekers or people with refugee status, here because of the fall out of 2003 and beyond. But this felt too didactic, trying to drive a point home which I wasn’t intending. Then my thinking shifted and what felt significant was how relevant this text actually was to the British public. After all its content – Blair’s justifications for war – were made in the name of British citizens. It then felt important to involve a wide group of people. I’ve worked in community development, diversity and equalities over the years with a very broad cross section of communities, so I draw on a lot of those networks when I’m making work.

Did the people in the videos know beforehand what they were going to do?
I was resistant to giving people too much information. I’m interested in people’s fresh responses. As an artist I’m not interested in people’s politics per se, but in their relationship to the political, and that’s a strong distinction for me; what is their relationship, in a way, to the context of the political in their lives. People I approached often thought I wanted to know what they thought of Tony Blair, but the work is not about that.

You see this work as ongoing rather than just the piece for Venice, so what’s next for the Chilcot project?
The exhibition goes to S.M.A.K in Ghent after the Biennale. I don’t necessarily want to show the same work again, so I may go back to the original idea of producing the 189 minute piece in its entirety, I may not. I’m reflecting on what the next stage of the video work should be, but I’m also thinking about other works including a Chilcot festival, hopefully next year. This would be a political, cultural and creative festival which invites people – artists, composers, journalists, human rights lawyers, psychologists etc – to use the Chilcot Inquiry as a springboard for commissioned collaborations, dialogues, presentations, artworks. I want to create a people’s symposium – a discursive space that is truly open.