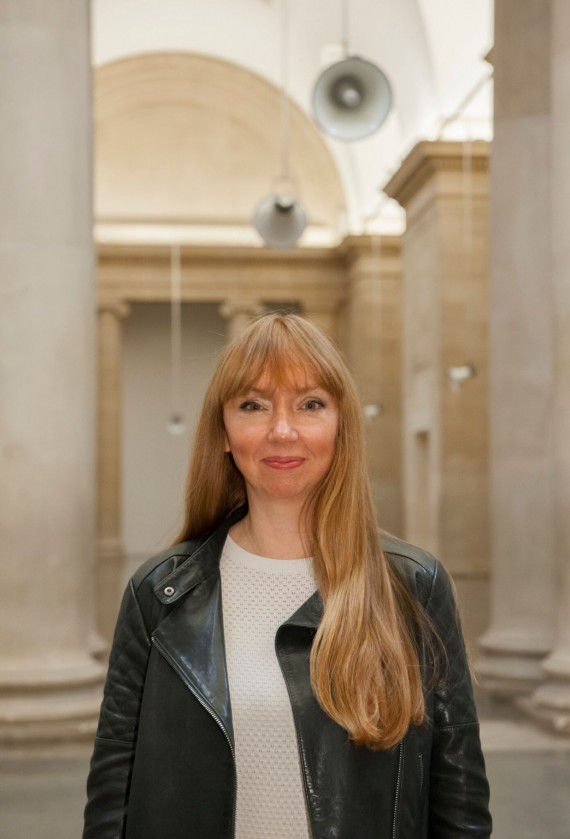 Best known for winning the Turner Prize in 2010 – the first person to win the award with a sound installation – Glasgow born, Berlin-based artist Susan Philipsz has just unveiled her new exhibition in the Duveen Galleries at Tate Britain, London.

War Damaged Musical Instruments uses recordings of tones from the military bugle call The Last Post, played on a range of British and German brass and wind instruments damaged in various conflicts.

The 14-part recording is presented on speakers situated at various points in the vast gallery space. Several of the instruments are from the first world war whilst others include a Balaclava Bugle (from the 1854 battle during the Crimean War) and a horn from the Battle of Waterloo (1815).

The fractured melody of the song fills the space, while the familiar notes of Philpsz’ recordings act as signals to moments in time long since past but no less resonant.

Your new work is a specially commissioned piece for the 14-18 NOW programme marking the centenary of the first world war. How did it come about?
Initially Andrew Nairne [director] from Kettle’s Yard in Cambridge was asked if the gallery would be one of the institutions to commission an artist to create new work for a programme commemorating the first world war. I was already thinking about this work and thought it would fit quite well. Initially it was going to be on the top of colleges in Cambridge. We did a test that was great, but unfortunately we couldn’t get permission. I was gutted because I was so excited but was left with a piece that felt homeless. Thankfully, shortly after this happened Tate approached me regarding showing a work of mine called I See A Darkness that they already had in their collection. I wasn’t sure it would work in such a large space so I said, ‘Hang on, I’ve got a new piece that would be perfect for the Duveen Galleries.’ That turned out to be War Damaged Musical Instruments.

The installation features a 14-part recording of damaged British and German instruments. Can you describe what’s being played?
I asked the musicians who took part to play isolated tones from the military bugle call The Last Post. It originally had the function of calling soldiers to come in from the battle but now it’s only really used in ceremonies and military funerals. People are very familiar with the tones of the tune, even if the way I have presented them is fragmented.

Why did you decide to use brass musical instruments?
The instruments need human breath to produce a sound. Some of them are so badly damaged that it was a real challenge for the players to produce any music from them. For me the point is more to do with what sounds they can make – even if it’s just the noise of someone’s breath passing through the battered instrument.

How did you locate the instruments?
I wrote to over a 100 different places. It was a long process that began by spotting a damaged instrument in a museum in Berlin. It had been found in an old bunker and had a bullet hole in it. This really sparked the idea of seeing what sounds the instrument was still capable of making. Slowly I got more replies and started travelling to various venues with a horn player and recording equipment to record on the spot. We went all over the place, sometimes to bizarre places in the middle of nowhere. From Berlin we went to museums in Munich, Nuremburg and Nottingham. There is even a Bugle B flat that was salvaged from the Battle of Waterloo that was recorded at the Museum of Army Music in Twickenham. All in all, the whole process took nearly three years.

Are you hoping to develop the piece further?
I’d like to show the work in different spaces but we’ll have to see how things develop. I’m currently undertaking the Villa Aurora residency in Pacific Palisades in Los Angeles. That will be my focus for the next three months.

You have lived in a variety of places throughout your career. What made you move to Berlin?
I actually moved here quite a while ago, way back in 2001. I’d been living in Belfast and then New York for a year and was unsure what to do. But I was then invited to do a residency at the Kunst-Werke and just fell in love with the city. It’s also cheap as hell. Rents have gone up a bit, but they are still great in comparison to London. Lots of my friends are moving here. It’s amazing really as it just seems to be able to absorb more and more artists. It’s a great city for making you feel like you belong. My situation has changed slightly in that I’m now travelling a lot. I used to go to so many openings and meet lots of new people. Berlin has always given me that sense of belonging. I think other artists can feel that too.