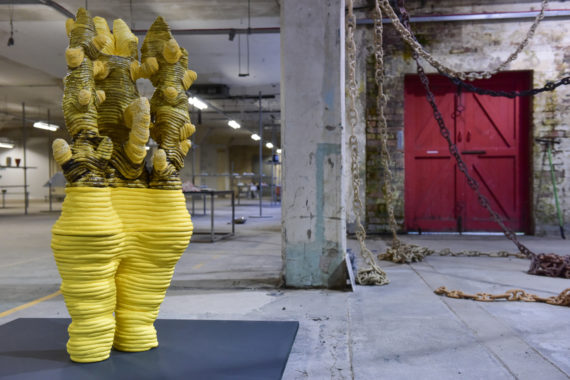 “There’s that thing about clay that’s always been there, that people do recognise,” says Barney Hare-Duke, co-founder and artistic director of British Ceramics Biennial. “It’s the mother of materials – the universal material of the earth. It’s primordial, it’s tactile, it’s malleable, it’s transformational. It’s the material that people respond to.”

Clay is enjoying a rise in popularity as an artistic medium, with recent months seeing a spate of exhibitions and public projects that reflect this resurgence. There’s the British Ceramics Biennial itself which continues in Stoke-on-Trent until November, while at Tate Modern the high-profile Ceramics Factory has just launched the new season of Tate Exchange. Also at Tate, its St Ives gallery recently hosted the survey show, ‘That Continuous Thing: Artists and The Ceramics Studio, 1920-Today‘.

“An interest in clay, particularly from fine artists, has always been there, it’s never actually gone away,” continues Hare-Duke. “But there seems to be a particular resurgence or revival of that interest. That interest is almost seen as respectable in a way that it hasn’t been seen in the past.”

The British Ceramics Biennial has been presenting the work of artists who work with clay since 2009. This year the main focus of the biennial is in The China Hall on the former Spode potteries factory site. A number of satellite exhibitions and projects are taking place throughout the city in conjunction with partner organisations such as AirSpace Gallery and The Potteries Museum & Art Gallery. 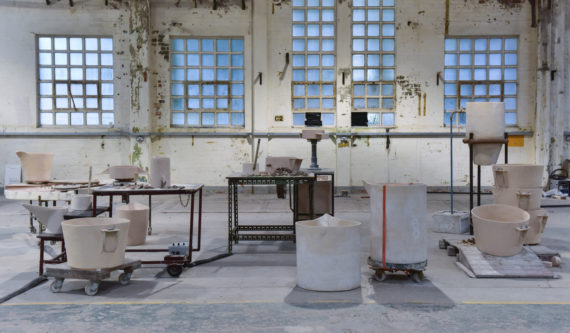 The biennial has a long-standing history of co-commissioning new works with artists and partner organisations as well as presenting its two ceramic award exhibitions – Award for emerging artists and the Fresh student prize. The latter continues to receive high-calibre submissions despite the closure of most of the UK’s dedicated undergraduate ceramics courses.

Says Hare-Duke: “There’s clearly evidence that there is a lot of really interesting clay and ceramics work going on within HE because we get to see that every two years.”

With only one undergraduate course in ceramics remaining in England, Hare-Duke sees long-term repercussions for the artform with the loss of skills, technicians and the dedicated time and teaching that allowed ceramicists to “dig deeper into the technologies of [clay]”. The one up-side that he has observed is the divergent way that fine artists have embraced the material.

“It’s the freeing up, away from needing to grapple with the technology and the science of the material, that actually has opened up the opportunity for those who felt excluded from the applied arts to come in and explore the material unfettered from those technical requirements.”

A former studio potter himself, Hare-Duke sees no hierarchy between studio pottery and the use of clay in contemporary artworks. “We are very interested in presenting and working with artists who are at the leading creative edge of their practice – not just those who work in one particular kind of way.”

For Ceramics Factory, artist Clare Twomey created a production line at Tate Exchange in order to make everyday objects from clay with members of the public. Her large-scale works explore the boundaries of authorship and where an artwork starts and ends, often by inviting the viewer to engage directly with clay and/or the making process.

Twomey agrees that “it’s definitely a really buoyant time for clay” but is doubtful that the institutional interest in the medium is a recent phenomenon, citing as example White Cube’s ongoing representation of artists who use clay in disparate ways such as Rachel Kneebone, Theaster Gates and Anthony Gormley. She does, though, see an increase in artists working with clay.

“Lots of people are interested in it. It’s a really good thing. The push and pull of the last 15 years, of seeing a deconstructed world of making, has given clay this real sense of being accessible in lots of ways to lots of different people,” she says.

“There’s a sense that the art school changed when art colleges became part of universities and the casting areas were [gradually] taken out. The deskilling of art schools has exposed the ease of a relationship with clay – that it’s pretty portable… you can have a go at doing it, you can do evening courses in it. You always see something immediate out of clay.” 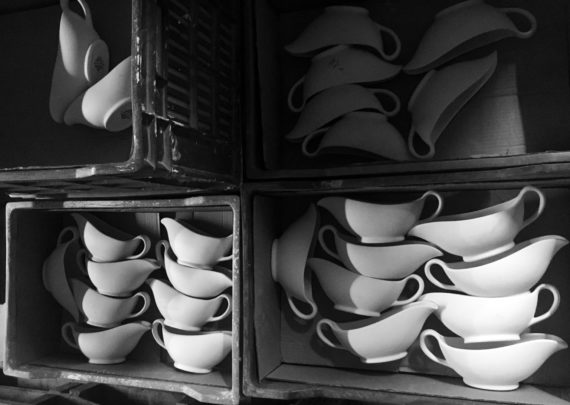 Twomey has a history of exhibiting at major institutions. Her first large participatory work, Consciousness / Conscience, was shown in South Korea and at Tate Liverpool’s 2004 survey exhibition ‘A Secret History of Clay’. For Ceramics Factory, Tate Exchange became a working factory with 40 factory staff and a 30-metre production line where the public could learn to make tea pots, jugs or clay flowers.

“The idea of the factory is that you do things not singularly, you do them as part of a large group. This is a way to discuss what people bring, the concept of the factory is about those shared sites – the relationship of people doing something collectively together.”

Over 2,000 fired clay objects will form a large-scale installation, lining the floor of Tate Exchange. From 5-8 October, the factory will become redundant, inhabited instead by sound recordings from the previous week and a programme of talks.

“The interest is artist led”

It was while undertaking a material science elective at Hunter College in New York during his masters in Fine Art Sculpture at The Royal College of Art that Jesse Wine became intrigued by the range of different capacities in which clay is used.

“It was curious to me that clay was used in completely different capacities,” explains the now New York-based British artist. “For example, on the nose of a spacecraft when it re-enters the Earth’s atmosphere, because clay can tolerate going up and down in temperature at such extreme speeds. [Also] the walls of bike wheels are often ceramic because when the brake presses against them they can handle the sudden change in temperature. I was led to it by what I didn’t know about it.”

Wine adds that the accessibility of clay as a medium is also important. “It’s really cheap to make clay art… Firing it isn’t that expensive – although it can be expensive individually. It’s a cheap way to make sculpture.” 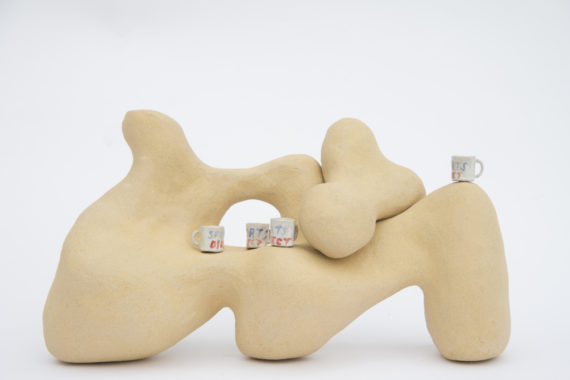 Also concerned with the nature of production – or of making and its histories to be precise – Wine’s sculptures are a conversation with works by other artists. They visibly incorporate elements of previous works to create something new, such as those he made for the recent survey show Tate St Ives.

“I would say the interest [in works in clay] is totally artist led,” he says. “I don’t know that institutions are falling over themselves to show ceramics because they want to, as opposed to saying, well we have a responsibility to do this and so we are going to do it. [When] so many people [are] doing something you have to respect and honour the fact that it’s a conversation in itself.”

Wine sees the fact that more and more artists are turning to making – to painting as well as working with materials such as clay – as symptomatic of the way that digital production has shifted how artists think about their production methods. Over the last two decades, with outsourcing becoming more affordable and more prevalent, the questions that artists now ask themselves about their motivations and their production means have necessarily evolved.

“It’s completely shifted because of this possibility in production terms and so as a response to that, people began to make their own work in an earnest, poetic capacity,” he says.

However, Wine sees a marked difference between how work in clay is critically received in the UK compared to other art scenes, such as in the US where the art market has fully embraced artists such as Ken Price whose works sell for upwards of half a million dollars. Wine compares Price’s output in terms of works made with clay to the continued relevance of David Bowie’s creative output over five decades.

He adds that clay and ceramics need not be siloed off from the wider discourse on contemporary art. “It’s unhelpful to talk about ceramics like an annexe to art as opposed to an integral part of it. Although painting is a law unto itself, it’s not really annexed… [neither is] video annexed from art.”

This perspective is echoed by Twomey who sees an equivalence between the way the world of traditional pottery has evolved over a long period and the newer history of artists who experiment with and make work with clay.

“I don’t know if I would qualify the work being made in clay as needing any special kind of difference. I just think it’s brilliant – everybody make with clay! Sometimes a journey an artist is on can help other artists to see things. Everybody’s on their journey and I really celebrate that.”

The British Ceramics Biennial continues in Stoke-on-Trent until 5 November 2017. www.britishceramicsbiennial.com