Antiuniversity Now 2017: "We can all learn from each other" - a-n The Artists Information Company 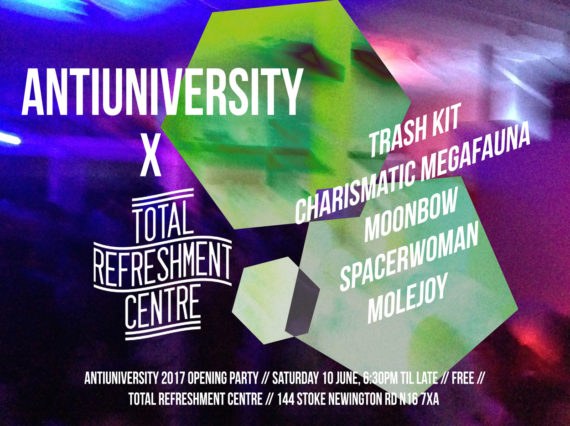 The annual peer learning festival Antiuniversity Now 2017 opens this weekend and features over 100 events, workshops and walks in a range of venues in London and around the UK.

Sharing similar values to the original, which sought to dissolve boundaries between students and academics, Antiuniversity Now promotes equality of access and participation with a new urgency driven by the rising cost of university tuition in the UK.

Centred around the idea that “we can all learn from each other”, the Antiuniversity Now programme is open to being shaped by all those who take part, while co-organisers Shiri Shalmy, Emma Winch, Liv Wynter and Eleanor Smith are on hand to help and advise event leaders.

“We don’t curate the festival,” says Winch, “it’s an open platform for anyone to teach. The support we give is to help find venues, to help people with things that might put them off doing an event. And to help to find audiences – how you take an idea, a concept or an experiment and turn that into a session or a workshop where lots of people can come and explore that idea.”

As in previous years, for 2017 there are a large number of walks and workshops that explore issues such as gentrification, climate change and community. Interestingly, Antiuniversity Now also acts as an umbrella for events by a number of existing alternative educational projects including Open School East in Margate and AltMFA in London.

In Southend, artist and coach Anna B Sexton invites participants to join her on Get Lost Find Yourself, an ‘unguided’ three-hour walk to discover new things about themselves and their communities.

Sexton is currently a student on The Other MA, an alternative art school and free professional development programme initiated by the arts organisation Metal as an alternative to the established fee-paying higher education system.

Continuing this wellbeing theme, a number of events look at mental health – both through supporting participants’ wellbeing and by taking a more activist stance towards institutional systems.

Therapist and artist Lee Simmons collaborates with art therapist Naomi Press to facilitate an evening workshop in London specifically aimed at activists who may have witnessed traumatic situations.

Acknowledging the stress that this work can have on the individual, Vicarious Trauma and Okness for Activists brings together a peer group for information sharing, the learning of resilience and techniques and discussion.

Other events include Politicising Anxiety: From Precarity to Care, Using Art in Mental Health Activism, Speak Out Against Psychiatry SOAP box, and Fred McVittie’s more philosophical, On Having A Head, which explores several ideas around consciousness and the body.

Says Shalmy: “It is clear that many people working as artists and organising as activists feel under significant pressure and that the way to respond should be collective action.”

Looking at ways we can protect ourselves, the festival includes two events designed to upskill participants on phone and internet security. Phone Security 101 is an informal workshop that provides an introduction to all aspects of phone security.

Host Your Own Crypto-Dinner: How to Use and Share Online Safety Tools is based on the idea of ‘Cryptodining’ – a movement that uses social activities as a forum for sharing knowledge and tools about keeping safe online.

Community and peer support is at the heart of the programme, which also includes film screenings, feminist and anarchist social events, and a launch party.

“We wanted to offer alternative spaces for organised autonomous education where people can realise their own learning, where they can teach and study from each other,” says Shalmy.

“We recognised at the Antiuniversity that we didn’t invent any model, we just put out a question: what can an antiuniversity be like today?”