Antiuniversity Now! festival: "The idea is that knowledge is created and shared by people” - a-n The Artists Information Company 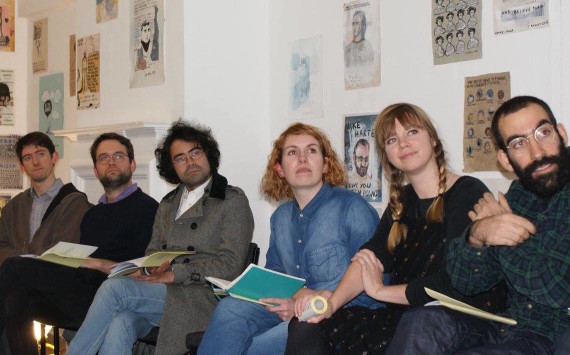 “Antiuniversity Now! is, by its nature, a call to society – anyone who attends is rebelling.” Curator and producer Shiri Shalmy is co-organiser of the Antiuniversity Now! festival. Initiated last year by Shalmy with Emma Winch and Alex Brown from the Hackney Museum, the staunchly political event aims to challenge elitism and class privilege in education through self-organisation and collaboration.

Since its first iteration in November 2015, Antiuniversity has proven to be a vital forum for artists to explore and share alternative models of education and practice. This year’s much-expanded festival of 120 events takes place across the UK between 9-12 June and includes the Alternative Art Education Summit in London, Deschooling Society at the New Bridge Project in Newcastle, and an investigation into what it means to be a local artist in a global world in Medway.

Shalmy, Winch and Brown were initially inspired by the original Antiuniversity of East London, founded in 1968 by a group of radicals who organised their own education programme outside of any formal institution. Angered by rocketing tuition fees, crippling student debt and the continuing marketisation of higher education, the festival’s organisers were moved to revisit the concept for today’s context.

The format is simple: anyone who wants to reimagine education is invited to do so by contributing an event to a four-day festival. Given the response to last year’s invitation, which resulted in 60 events instead of the five they anticipated, they’ve clearly tapped into something.

“We were completely surprised by the immediate level of interest, generosity and commitment from so many people, coming from so many different angles,” says Shalmy. “It turns out that in every university, in every city, there is a group of people who think something needs to be done. They might be art world, they might be activists, they might be community organisers or they might be parents.” 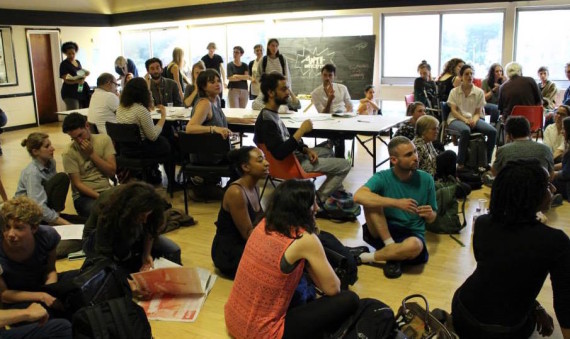 The project aims to challenge hierarchies between types of knowledge and learning, and supports the exchange of ideas across different groups. “The idea is that knowledge is created and shared by people,” says Shalmy. “It’s not owned by one institution, the arts sector or academia, or by any one class.”

Crucially, everyone involved, including the organisers, gives their time and ideas on a voluntary basis, and there’s a strict non-curatorial policy. Shalmy says of the content: “As long as it’s free –  which is essential – and accessible, and there’s some form of collective knowledge creation or sharing, it can be pretty much anything.”

This has resulted in a hugely diverse programme of workshops, walks and talks, encompassing the joyful and absurd, the political and practical. Participants can get to grips with three-sided football, improve their swimming skills, cook with strangers, go on a radical bird walk, and celebrate together at a big party organised with festival partners, Strike! Magazine.

For younger students there’s a DJing for kids workshop, and for those who can’t make it along there’s a continual 72-hour radio broadcast. The invitation has drawn contributions from community groups as well as established academics including Anna Minton and Adam Greenfield. Prominent themes include labour, migration, housing, neoliberalism and activism, reflecting a range of interwoven causes that people care about.

The spirit of the festival undoubtedly has enormous resonance, in part due to the regressive elitism and insularity that art education and the wider art world are vulnerable to in a climate of austerity. “The idea that anyone can be an artist now is a joke,” believes Shalmy. “Who can afford to work in the arts? To study art? To teach art? It’s a sector that easily shows how terrible the situation is.”

Artist Kerri Jefferis, who’s been involved in Antiuniversity since its inception having graduated from Middlesex University in 2014, describes an art degree as a luxury item.“I feel like now an arts degree is sold as a lifestyle choice,” she says.

The festival’s organisers see the arts and higher education sectors as important sites to promote Antiuniversity. Due to their size, economic significance, and the precarious lifestyles facing their workers and participants, Shalmy suggests that these sectors have the potential to provide today’s ‘lost factory gates’, where resistance can be mobilised on a large scale.

“I’m no expert in labour history,” she says, “but I think it takes a few organisers to wait at the factory gates with a good idea and a leaflet, and this is basically what we’re doing. Our factory gates are Facebook and the art schools.”

With sessions that explore dilemmas associated with artists seeking sponsorship, the art world’s response to austerity and Intellectual Property for art and activism, Antiuniversity has attracted artists and cultural workers who are critical of the sector they operate in. Untethered to an institutional or curatorial framework, the festival also provides artists with a playground outside the art world.

“Antiuniversity opens up a space of possibility that feels really different,” says Jefferis. “For artists who don’t want to show in galleries or conventional art spaces, it’s a perfect model because you get to do what you want. Suddenly you feel that there are different rules here.” 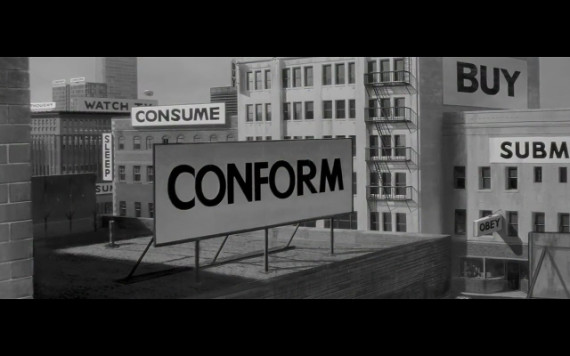 Artist Sophie Chapman, who has been working with Jefferis since last November’s Antiuniversity, explains the festival’s appeal: “I know so many people who get asked to do education work in galleries, and who aren’t allowed to be political at all, who are completely censored, and that’s so frustrating. Antiuniversity doesn’t police any of that. It shouldn’t be mind blowing but it feels really liberating.”

Jefferis and Chapman’s latest contribution to Antiuniversity is Fuck It! Let’s make a Band, taking place in North London’s Finsbury Park on 11 June. In a deliberate move away from insular and static discussion-based events, and inspired by punk’s visceral and noisy energy, they are inviting people to collectively express their joy and rage in public as part of a spontaneous band.

“We want to see if you can create this atmosphere to support different ways of learning, and speaking to each other, and expressing yourself, even if it’s for one day,” says Chapman. “We want people to feel really good.”

Though the festival itself spans only a few days, its impact extends much further. Because of its invitational format and decentralised structure, it has created a domino effect: people who attend the festival often feel empowered to run an event themselves, or form their own group, such as the Medway free school, an education collective in Kent.

The surprise success of Antiuniversity shows no sign of slowing down – “We’ve already been asked to do a winter festival,” says Shalmy. And with the government’s recent White Paper on higher education reform indicating that tuition fees could rise again next year, the festival’s ethos and format looks more urgent and vital than ever.

Lydia Ashman was one of five a-n members participating in the inaugural a-n Writer Development Programme which ran from June 2015 to March 2016. She is an Education Projects Manager at Bow Arts and a freelance writer and producer. Alongside artist Ania Bas and curator Simone Mair, she runs The Walking Reading Group.

For more information on the writer programme, and to read more of the writers’ work, visit the programme’s blog on a-n.co.uk or use the a-n writer development programme tag