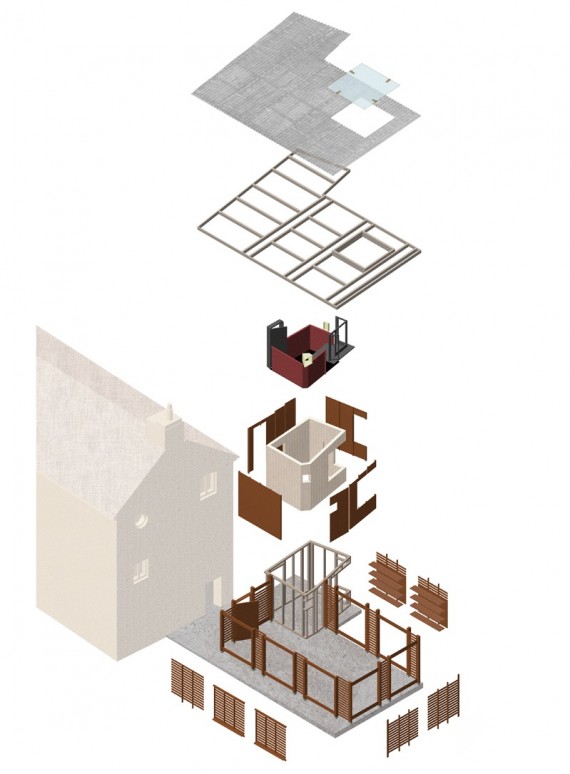 Hauser & Wirth Somerset has announced the winning design for The Shed Project, a competition for young architects to develop a new out-building for use by creative practitioners in the gallery’s residency programme.

The winners are Alex Bank, Sam Casswell and Tom Graham. The team, who all studied or are studying at The Sir John Cass Faculty of Art, Architecture and Design at London Metropolitan University, presented their winning concept, The Garden Rooms, during a public event on Saturday 20 June, alongside proposals from another six shortlisted participants.

The competition invited individuals or multi-disciplinary teams to create a new concept to replace an existing out-building attached to H&W’s Maltings Studios, an historic building in Bruton town centre currently used by artists in residence.

The competition forms part of H&W Somerset’s recent Architecture Season, a series of exhibitions, events and installations exploring the nature of collaboration between architecture and other creative disciplines. The season launched in March with the opening of the Radić Pavilion (the 2014 Serpentine pavilion) at H&W’s Durslade Farm site.

On winning the commission, which has a £25,000 budget for materials and construction plus a £1000 honorarium, Bank said: “It’s been a real pleasure working with my colleagues and really rewarding to collaborate together. It was a lot of work, even though it’s a small building – small buildings can really have a big impact and contain a lot of meaning for something so modest.”

The Garden Rooms takes as its focus the functionality of the Maltings Studios, and creates a new synergy between the H&W complex and its gardens, which opened in July 2014.

“The Garden Rooms stood out for its modesty, and its imagination, which allow it to be a truly inspirational space for artists,” said Alice Workman, director of H&W Somerset. “We were hugely impressed by the quality of all shortlisted finalists and I think the judges had a very tough decision.”

The judging panel was chaired by Edward Workman, director of global property at Hauser & Wirth, and included writer and collector Niall Hobhouse, critic and curator Justin McGuirk, and artist and former professor of sculpture at Royal College of Art, Richard Wentworth.

2014 – How was it for you? An interview with Alice Workman