Art Across the City: 'Like aliens have landed and left us presents' - a-n The Artists Information Company 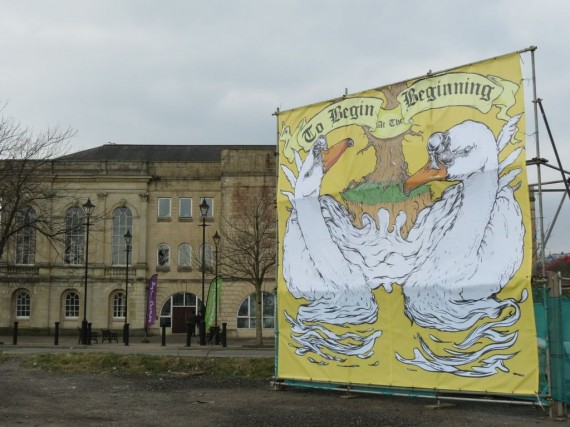 The words ‘Ambition is critical’, by the Welsh poet David Hughes, greet me on my arrival at Swansea station. Growing up in the city, it was a statement that used to deflate me – I misunderstood its meaning to be that ambition should be criticised, not that having ambition is a necessity!

I am in the Welsh city to take part in a lunchtime tour organised by Locws International. This artist-led charity delivers Art Across the City, which brings art into the centre of Swansea. Five new artworks have been commissioned and are on display until 12 May. Pieces by Pete Fowler, Olaf Breuning, Sinta Tantra, David Long and Philip Cheater are nestled among semi-permanent and permanent artworks across Swansea.

As I look out onto the High Street, my gaze is immediately drawn towards a large mural, brightly depicting UFOs, Dylan Thomas’ face, swans, horses and owls. It’s attractive and attention grabbing – a great welcome to a city. Pete Fowler’s Portrait of the Young Artist as an Octopus is his largest mural to date. The artist is best known for his album covers for the Super Furry Animals; his work has a distinct, cartoonish quality.

While trying to decipher the imagery, my guide arrives. Gordon Dalton, Locws project manager, leads many of the tours. He tells me it’s just me and him today: “We’ve had a lot of cancellations due to the measles outbreak.”

As we chat outside the train station, we see passersby taking photographs of the mural. “That’s been happening a lot with this piece – Pete finds images of it online on all sorts of sites,” says Dalton. The High Street is the gateway to the city centre; you have to pass through the dilapidated pubs and shops to reach any of Swansea’s attractions. In its prime this was Swansea’s epicenter, with both sides of the street once flanked by grand Edwardian architecture.

I ask Dalton if he sees Locws as part of a regeneration scheme for the area. “It’s not about regeneration, we don’t pretend that art can achieve that,” he says. “We are concerned with reinvigorating this area, not gentrifying a place or covering up its failings. We want to challenge the viewer to reconsider and engage with their surroundings.”

The next new work is Greater Reality of Elsewhere by Sinta Tantra. Layers of geometric colour are painted across the top of an anonymous modern shop building. Gaudy gold palm trees hover across the facade. This exotic work transports you to an imagined sunny place, and pulls you away from the grey surroundings.

“When we were showing Sinta around Swansea, at first she couldn’t believe how grey it was,” explains Dalton. “Then she began to see how multi-cultural this area is and it pointed her towards her experiences of being Balinese, but growing up in the West.”

Tantra’s piece encapsulates my Swansea identity – colour and bling feature heavily in the life of a local girl. I tell my tour guide that this is a Swansea girl’s dream – it’s brash, jeweled and playful. “That’s exactly it – Sinta picked up on the bustling nightlife, which led to her blowing up the image of a gold antique palm tree brooch.” Her work is above your eye line – for the first time in my familiar surroundings, I look up and notice the architectural detail that neighbours this work.

Questions about the city

Our next stop is Olaf Breuning’s work, which stands proudly in front of the castle ruins at Castle Square. YES? NO? are two large, black boxes, covered in doodles of ET and children playing. Responding to the regeneration of the castle area, they act as obscure ballot boxes, asking us to decide what we want for the city. The Swiss artist took this opportunity to build something imposing, but unprecious. Seagulls perch on top of the work and kids utilise it as a climbing frame.

“We are happy for it to be bashed about,” says Dalton, “it’s being appropriated and engaged with. It gives ownership to the public.”

We didn’t make it to the outskirts of Swansea to see Philip Cheater’s piece – the walk is too far for the lunchtime tour – but I had been seen it a few weeks before. Land Marked are three large, angular sculptures that rise from the lawn outside Swansea’s Guildhall. It struck me that they too, like Breuning’s work, were vulnerable, but imposing in a public space.

Our tour ends with David Long’s freestanding image, To Begin in the Beginning, outside the Dylan Thomas Centre. A swan, Swansea’s best-known emblem, dominates the illustration, which is an optimistic crest that commands Swansea to rethink itself and work as a community.

Social media and blogs are buzzing with interest in this year’s Art Across the City. One Locws school participant stated: “It’s like aliens have landed and left us presents.” It is easy to measure the impact the work is having as you’re walking around – people take note of it, read the context boards and take pictures.

Arriving back at the train station, I revisit that David Hughes quote. Ambition is certainly critical when creating a lively public art programme – and Locws’ Art Across The City has tons of it.

Art Across The City continues until 12 May.
www.locwsinternational.com