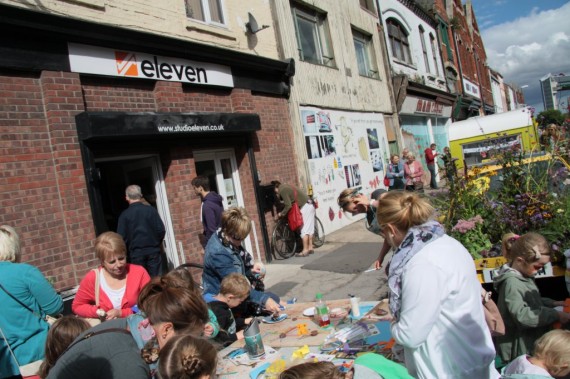 Hull has beaten Swansea, Dundee and Leicester with its bid for the title of UK Capital of Culture 2017. Centred on the four themes of Roots and Routes, Made in Hull, Freedom, and Quirky, the programme for 2017 is inspired by ‘the distinctive character of Hull’ and its geographical position – which at once opens the city out to Europe whilst historically sheltering it from the rest of the UK.

“Hull’s success in becoming City of Culture for 2017 is wonderful news for the city and the wider region and ensures that necessary investment in the arts here will flow in to build upon the sometimes precarious position of many arts organisations and artists,” says Rob Moore, artist and co-director of Studio Eleven Gallery, an artist-led space housed in the rejuvenated Fruitmarket Cultural Quarter of Hull.

Hull will present a cultural event for every day of 2017 and as well as the city’s ambitious plans for 25 festivals, the 12 months of the year will see 12 ‘Made in Hull’ commissions, including Richard Wilson’s slipstream, which will showcase Hull at Heathrow Airport, and 12 artists’ residencies for 12 of Hull’s iconic locations.

“We have also contributed some ambitious project ideas from Eleven which probably will now emerge to be part of the main events both leading up to 2017 and in the City of Culture year itself,” adds Moore, who is particularly excited about an international open submission Printmaking Biennial that he will be initiating with Studio Eleven co-director Adele Howitt.

The Fruitmarket Cultural Quarter that has emerged over the last four years is home to the long-running artists studios Kingston Art Group and numerous artist-led spaces including The Museum of Club Culture, Projection Rooms and Studio Eleven Gallery.

RED Gallery of Contemporary Art, Hull’s oldest artist-led gallery, sits in the city centre. Committee member Andrew Quinn says that the gallery is looking forward to expanding over the next few years, having unfortunately just missed out on a new space in the Fruitmarket when the 2010 change in government saw the scrapping of regeneration body Yorkshire Forward, putting on hold a number of artists’ projects in the growing artistic hub near Hull Marina.

This welcome resurgence of art activity comes on the back of a lull in Hull’s artistic fortunes. In the mid-2000s the art scene was dealt a major blow when the inspirational Hull Time Based Arts closed and the University of Lincoln withdrew the once-experimental fine art courses at Hull School of Art & Design.

Newly set up by artist Kerry Baldry and housed at the back of The Museum of Club Culture, Projection Rooms is a multi-screen gallery space, which continues a long tradition of artists’ film and video in Hull – perhaps not entirely coincidentally as Baldry’s collaborator and co-founder of the Museum of Club Culture, Mark Wigan, studied in Hull in the 1980s. The pair returned to Hull four years ago and have been part of the renewed boom in Hull’s contemporary art scene. Says Baldry: “Hull needed this, everybody in the city wanted it and we are looking forward to delivering a year-long programme of high quality cultural experiences that will showcase Hull’s fantastic homegrown talent and cutting-edge work by artists from all over the world.”

In its Capital of Culture 2017 bid, Hull has played to its strengths, recognising that its perceived weaknesses are actually its greatest attributes. The concept of Freedom resonates throughout Hull communities, not least the contemporary art scene who have over the last few decades been drawn to Hull for its idiosyncratic nature and anti-establishment spirit.

Mainstream accounts of Hull’s individual stance celebrate Philip Larkin’s poetry, William Wilberforce’s opposition to the slave trade and the city’s denial of entry to King Charles I during the English Civil War. The contemporary art scene has its own share of founding myths and narratives, albeit of a more underground nature.

In the 1980s and ’90s, Hull Time Based Arts brought critically engaged and internationally important film, performance and new media artists to the city for its annual ROOT festival. It was this free spirit that attracted the late Paul Burwell, a long-term collaborator of Richard Wilson and Anne Bean in the Bow Gamelan Ensemble, to up sticks from London and develop the formerly derelict Kingston Rowing Club and Boathouse into a popular underground haunt for the art community in the early 2000s.

It was also this committment to challenging barriers to freedom that enabled Kurdish artist and refugee Adalet Garmiany, along with Rob Gawthrop and Justine Blau, to found ArtRole, bringing Kurdish artists to the UK and British artists to Kurdistan, Iraq. The organisation has now migrated from its roots in Hull and operates in Kurdistan.

In the run up to 2017, the artist-led spaces of Hull’s Fruitmarket continue their work. Projection Rooms’ programme for next year includes screenings of work by Michael Szpakowski, Steven Ball and Katherine Meynell. And with a nod to ‘the progressive Time-Based Art course in Hull during the 1990s,’ Helen Kaplinsky, the Contemporary Art Society’s curatorial fellow for the East Coast, is bringing part of Hull’s experimental history to the Whitechapel Gallery, London for the curated exhibition Contemporary Art Society: Damn braces: Bless relaxes, which opens in December.

Meanwhile, artist and Air member Paul Collinson, who has long been involved with Hull’s artist-led community and its cyclical changes, offers a note of caution regarding the city’s new cultural profile: “Those grassroots organisations and galleries, studios and venues have, since 2008, helped develop Hull’s Fruitmarket area into a thriving and vibrant destination. I hope this is not forgotten by our City Fathers over the next few years.”

Congrats Hull, but ‘culture city’ status is no guarantee of revival by Dave O’Brien