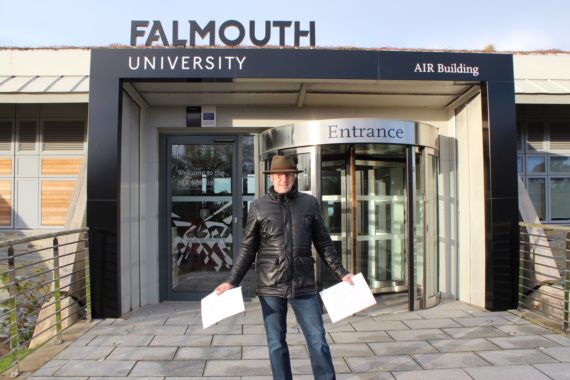 The Belfast-born sculptor Tim Shaw has released an open letter criticising Falmouth University over the closure of degree courses and increases in class sizes and fees.

The university recently denied it was closing its art foundation course, despite suspending applications for 2017. It announced it would be opening a consultation on the future of the Foundation Diploma in Art and Design due to its ‘financial viability’.

Cornwall-based Shaw, who studied at the university and was made a fellow in 2013, said: “It’s a situation that appears strangely out of kilter with an educational establishment that lays claim to being the number one arts university.

“This very popular course serves as a vital introduction that enables school leavers to find their way through practice into a chosen degree discipline.”

He adds that another one of the courses that will go into cessation in 2017 is Contemporary Crafts. “This gem of a course was developed over 20 years, from a BA in Ceramics into a course that brings together a range of disciplines, enabling students to work hands-on with metal, wood, plastics, clay and glass.”

Shaw doesn’t agree with some of the reasons given for closing the course, namely employability. “It was another factor cited, to the surprise of many of the course’s graduates, who have used the skills gained on the BA to make their living and start successful businesses.

“Many successful art and crafts-based businesses in Cornwall and beyond would not have come into being without the grounding that this course provided.”

Shaw also claims the course was not deemed profitable enough to warrant the space it occupied. “Do not some courses by their nature need more space and resources than others? A studio-based course will demand more space than a writing or digital media course, because its practice extends three dimensionally.”

Another area Shaw is critical of is the number of students being admitted to the university. He says it “damages the fabric of life in Falmouth. Several undergraduate courses, with year groups that now number around 140-150 students, are surely at risk of having their reputations ruined by volume.”

Shaw adds that students themselves have complained not only that their cohorts are too big, but that Falmouth itself has ‘too many students’ for a town of its size.

The towns of Falmouth and Penryn have a total population of approximately 33,000, with the governors of Falmouth University proposing an increase of 8,000 students – the equivalent of one quarter of its population.

Shaw is also critical of the university’s CEO, Professor Anne Carlisle, who has an annual salary and benefits of £285,900. Lecturers recently went on strike after she received a 25% pay rise, when they are were being offered just 1.1%.

Responding to Shaw’s letter, a spokesperson for Falmouth University told Cornwall Live: “We are investing heavily in teaching and facilities, to ensure that the university remains an inspirational place to study [and] retains its ranking as the number one arts university…

“In our last staff survey, 89% said they felt proud to work here. Our overall satisfaction score in the national student survey is 86% – up nine points from 2011.”