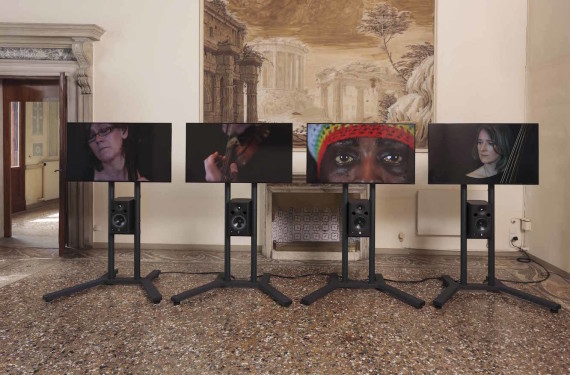 A group of artists featured in an exhibition at the National Art Gallery of the Bahamas (NAGB) have criticised the British Council’s decision to remove its logo from the show’s catalogue.

According to the gallery, the issue relates to concerns over the ‘political content’ of the publication for ‘We Suffer to Remain‘, an exhibition exploring de-colonial art practices that features the work of local artists Sonia Farmer, Anina Major and John Beadle, displayed alongside Scottish artist Graham Fagen’s video installation The Slave’s Lament.

Originally commissioned by Scotland + Venice for the 2015 Venice Biennale, with funding partly coming from the British Council, Fagen’s work is a re-working of the Robert Burns song of the same name which was first published in 1792.

The section of the catalogue which seems to have caused the British Council’s response is an essay by Professor Ian Bethell-Bennett, a Bahamian academic, which addresses local concerns about the growth of Chinese influence in the Caribbean state.

As the Guardian reports, the gallery’s director, Amanda Coulson, has written to the council’s board on behalf of the artists. She said there is “general feeling of being silenced and exploited. How this looks from our viewpoint is that a white Scotsman is sanctioned to talk about slavery – and is considered courageous and daring, fêted at the most prestigious international art event – but black people should stay silent because their feelings are too raw, too aggressive, and too ‘political’.”

She added that the timing of the British Council’s actions could not be more unfortunate, describing it as a ‘lost opportunity’ to foster goodwill in the wake of the Windrush revelations earlier this year. “That the British Council feels that it is wise to distance itself from these voices at such a time, shows a remarkable lack of compassion, care or – frankly – a strategic PR plan.”

In response, Gemma Hollington, the British Council’s head of exhibitions, has apologised, saying the decision was based on the council’s need to remain non-political.

She said: “It’s clear that the artists feel upset by how we’ve approached this and we genuinely regret that. With hindsight, we could have handled this differently. From our perspective, the process was not us unilaterally telling them what to do, but working to make sure the essays were published in full while not affecting our non-political status. We continued to discuss with the NAGB throughout, and are still regularly in contact.”

Explaining his position, Fagen told the Guardian that he felt the British Council had actually made the situation more political by removing its logo.