Inventory of Behaviours: finding value in the things artists do when not making artworks - a-n The Artists Information Company 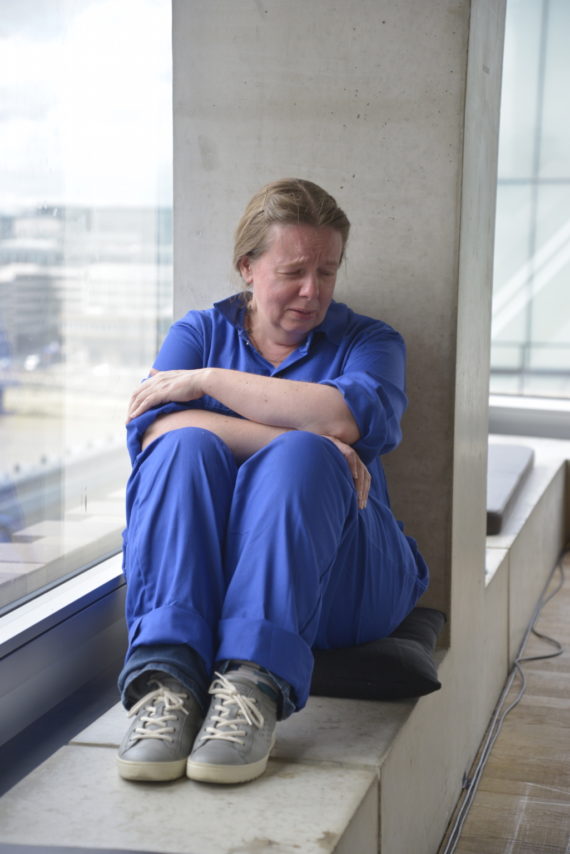 ‘Rearrange your desk’; ‘Be both in and out’; ‘Feel for an imagined shape in the air’ – just three of the hundreds of instructions submitted to Inventory of Behaviours, a four-day performance that took place recently on the fifth floor of Tate Modern’s Blavatnik Building.

The call-out, posted on social media six weeks ahead of the event, asked artists to submit their ‘preparations, patterns, neuroses, speculations, and procrastinations that surround the production of art in the studio’. The twist: that these behaviours must be removed of the first person and presented as instructions to be carried out by a set of volunteer artists, invited schools and university groups, and members of the public.

The brainchild of artists and senior lecturers Jo Addison (Kingston University) and Natasha Kidd (Bath Spa University), with support from Tate Exchange and Freelands Foundation, Inventory of Behaviours intends to ‘shift focus from the mechanics of making artworks to the activities that occur before, alongside, and around it’.

Throughout the week, instructions were printed and posted on the main wall of the space, revealing a variety of responses and thought processes. Contribitors ranged from undergraduate students and emerging artists to the sainted Phyllida Barlow, whose instruction was: ‘Enter the studio in the morning and realise you are not the genius you thought you were last night.’ 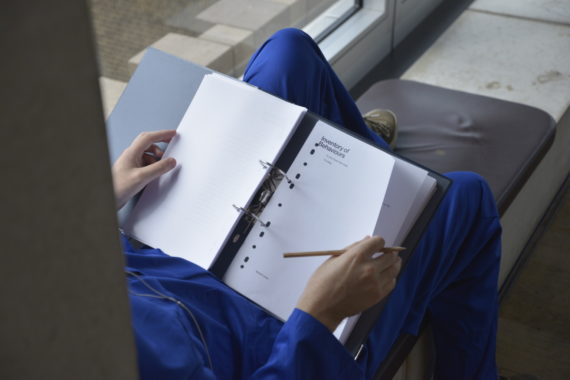 Many instructions had a confessional tone as they referred to continual checking of social media and emails, repeated over multiple devices, or tuning in to Talk Sport and popping out to Greggs for a cheese and onion pasty. All of which prompted Addison to suggest that, for some people, the submission process may have served as a kind of outing of these behaviours. There was, of course, room for the cynical: ‘Copy. Paste.’ And the brutally honest: ‘Take a full-time job in an unrelated field, spend evenings drinking in pubs, and in-between try and find the time to make some work.’

At the end of the week I took my place in a group discussion to share our observations from the event, led by Addison and Kidd with Dr Eleanor Morgan (artist), Dr Ed Roberts (neurologist), professor Sacha Roseneil (psychoanalytic psychotherapist), and arts education researcher Dr Nicola Sim. I was minded to bring up my own fine art degree experience which, despite attending almost every single day, rarely produced any work during my studio time.

The group, and audience, agreed that the things that I did do – turn up, interact, ponder, eat, chat – were unquantifiable but nonetheless essential. Doubtless other students were doing the same, the difference being that they were doing it at home, or down the pub. This prompted Addison to raise the subject of the annual ‘space utilisation survey’ dreaded by arts faculties throughout the UK, during which the host institution takes a single day to look at whether the studio spaces it affords its students are well-used or not. Indeed it is this survey which, in part, has inspired Addison and Kidd to undertake this area of research.

Roseneil mentioned the quantity of submissions that set out instructions for how to bring about a mood for making work, such as ‘Put on your overalls’ and ‘Think about an artist that inspires you’, and it was agreed that these had misinterpreted the brief somewhat. Yet it was this kind of instruction that appeared to be most regularly re-enacted in the space.

Reasons for this could range from accessibility, the appeal of an activity (we didn’t come all the way to Tate Modern to sit and listen to the radio), or the physical set-up of the space, which comprised three zones that were clearly signalled as making stations, equipped with materials and tools to explore possibilities set out in the instructions. The panel agreed that while the performance aspect of this research was interesting, far more intriguing were the submitted behaviours themselves, which revealed a kind of banal normality behind the swipe-carded studio complex doors of the artist. 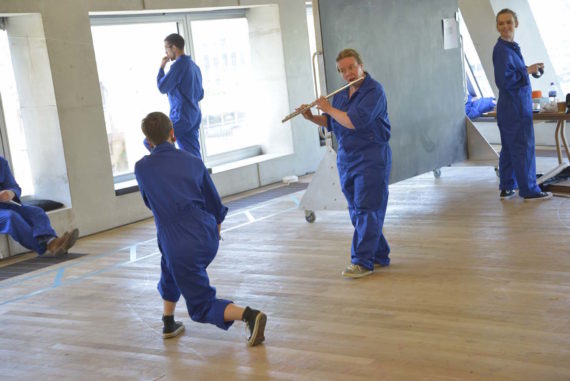 It fell to neurologist Ed Roberts to point out that the behaviours that occur between the making of artworks are far from exclusive to the practices of being an artist. Roberts has worked with professional athletes and cites the relationship between the physical and the psychological as one that requires both maintenance and downtime. His example of being unable to finish a crossword, then going about your day and coming back to it with a fresh mind and finding it easier to complete, resonated with every artist in the room as well as the academics in attendance.

Certainly these behaviours are not procrastination – the delaying or postponing of something – but are in fact a necessary transitional space between not making and making art. Nobody talks about when Cezanne emptied his ashtray, or caught up with the news, or when Van Gogh did his laundry. On second thoughts, the latter may well be documented in his letters to Theo, but Vincent aside, historically nobody wanted to hear that artists are normal people, with normal things to do, and normal distractions.

Spend a little time with the wall of instructions at Inventory of Behaviours and it’s clear that artists, too, must reset emotionally and psychologically, before returning to their work with a fresh body and mind. And if that happens to include crying, watching back-to-back episodes of Love Island, or posting pictures of their lunch on Instagram, then so be it. It’s all working towards the same goal of making work; it is all of equal value.

Trevor H. Smith is one of eight a-n members selected for the a-n Writer Development Programme 2017-18. For more information on the writer programme, and to read more of the latest cohort’s work, visit the 2017-18 programme’s blog on a-n.co.uk or use the a-n writer development programme 2017-18 tag