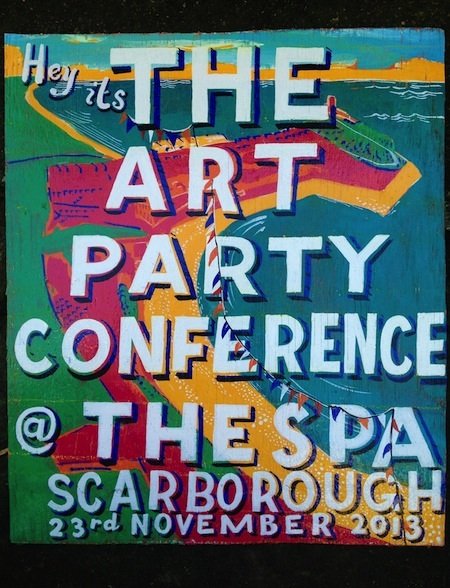 With less than two weeks to go, the finishing touches are being put to the Art Party Conference 2013 programme. The brainchild of Bob and Roberta Smith and co-organised with Scarborough’s Crescent Arts, the event will take place on Saturday 23 November 2013 from 2pm to 2am in Scarborough, North Yorkshire, at the Spa Conference and Entertainment Venue.

Billed as an ‘antidote to all other conferences’, it will debate the future of the arts in today’s climate of spending cuts and changes to the education system. The Art Party, which is not aligned to any political organisation, hopes to influence decision-makers to listen and think again.

The event kicks off with The Art Party March along the beach to the Spa, with artists invited to bring their own banners or placards to join in. Bob and Roberta Smith will perform his Letter to Michael Gove, before launch of National Society for Education in Art and Design‘s ‘alternative curriculum’.

a-n and AIR come to the party

Stand up for your practice! a-n’s special Airtime speed networking event offers opportunity to meet AIR Council, practising artists and professional experts and get advice on everything from charging, contracts, networking and social media whilst hearing how to get involved in the Paying artists campaign. Drop by the a-n stand to meet the a-n team and sample a special conference edible treat.

AIR Council’s Joseph Young’s provocation in performative concrete sound poetry form will feature sound recordings from the morning’s March, whilst Susan Jones, Director of a-n will use the opportunity to ask: ‘If all this art is feeding the nation’s souls, who’s feeding the artists?’

She said: “Artists’ income has dropped dramatically since the recession, with less paid work and HE teaching a major factor. Arts Council England’s latest policy document says that ‘low levels of pay can present barriers to entering the workforce and furthering their careers’. Whilst the better guidance ACE offers on internships is important, where’s the call for similar standards in the fees for artists who are exhibiting or leading gallery education programmes?”

The Art Party’s evening programme will feature music from the Ken Ardley Playboys, Flameproof Moth and Grubby Mitts, with DJ sets from artist Haroon Mirza and Scarborough’s DJ Tooley. There will also be life drawing classes with ‘surfer models’, plus performances from artists who have ‘taken a stand’ at the conference.

Bob and Roberta Smith said: “It’s going to be an extraordinary national event. We want to ask three vital questions: What first turned you onto art? How do you think art should be taught in schools? Why do you think art is important?

“It’s going to be a place where people can have their say, take a stand, have a rant, and tell us exactly what’s going on in their world in the arts. With so much creativity on offer, it’s going to be serious fun!”