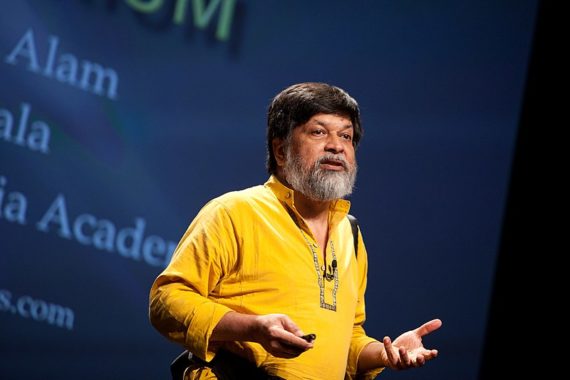 Artists including Antony Gormley and Anish Kapoor back campaign for release of photojournalist Shahidul Alam The Bangladeshi photographer was arrested last month for damaging ‘the image of the nation’ after he was vocal in his support for student protesters in the city of Dhaka. When he appeared in court the morning after the arrest, he claimed he had been assaulted and threatened with further violence.

In response, Alam’s niece, the architect Sofia Karim, who lives in Britain, has published an open letter calling for his release. In it she states: “Given that Bangladesh presents itself as a democracy, the state should respect the right of Dr Alam, and all other citizens, to freedom of expression. Instead, he has suffered inhumane treatment at the hands of the police and judicial system.”

The letter has so far garnered signatures from 47 high-profile names from the art world. This includes the artists Antony Gormley and Anish Kapoor, plus art professionals such as Tate Modern director Frances Morris, National Portrait Gallery director Nicholas Cullinan, and Sarah Munro, director of Gateshead’s Baltic Centre for Contemporary Art.

Cullinan told the Guardian: “Freedom of speech, artistic expression and talking truth to power are vital barometers of civilisation. Whatever is done to one person against these central pillars of a fair and tolerant society is done to all of us.”

The building that houses Brazil’s National Museum, which has been destroyed in a fire, dates back to 1818 and was previously a palace for the royal family https://t.co/iFnA1Nryq0

200-year-old Rio museum The Museu Nacional gutted by fire The historical and scientific institution housed an archive of 20 million items, the majority of which are believed to have been destroyed. The fire began after it closed to the public on Sunday evening, and there are no reports of injuries.

Although it is unclear how the fire started, there have been reports that in recent years the museum had fallen into disrepair. Brazil’s president, Michel Temer, who has presided over cuts to science and education as part of a wider austerity drive, called the losses ‘incalculable’. He tweeted: “Today is a tragic day for the museology of our country. 200 years of work research and knowledge were lost.”

Tes analysis shows arts subjects are being slashed in favour of English, maths and science New analysis by Tes of data from the Department for Education shows that an increasing number of hours are being devoted to core subjects in schools in England. 51% of key stage 4 teaching time in secondaries is devoted to English, maths and science subjects, an increase of 6.5% since 2011.

This is reflected in a dramatic fall in the hours spent teaching art, which is down 9% at key stage 3. With design and technology, it is even more dramatic, with 19% fewer hours at key stage 3 and 40% fewer in key stage 4. Music and drama are down 11% and 7% respectively.

Malcolm Trobe, deputy general secretary of the Association of School and College Leaders, said: “The reality is that performance measures are what schools are judged on, so this puts an undue amount of pressure on leaders, governors and trusts.”

More than 10,000 publicly owned artworks remain hidden from public view across London Councils across the capital own over £150m worth of artwork, including pieces by artists such as Pablo Picasso, Pierre-Auguste Renoir and Edgar Degas, plus British artists David Hockney, Damien Hirst, Tracey Emin and Gilbert and George.

As the Standard reports, professor Steven Parissien, a visiting fellow at Oxford University and director of Compton Verney gallery, said the councils should lend art to small galleries in London and the South-East or local institutions such as hospitals and colleges.

He commented: “There are some complete gems there and it’s not about the monetary value, it’s about the cultural value. There is no reason these should be in stores. Art is about lifting our spirits. It’s great therapy, but not if they are in stores. This is our art, so let’s get it out there.”

Examples include Southwark council, which manages the permanent collection of the publicly funded South London Gallery, which owns a 4,300-piece collection, most of which is in storage. The £13 million collection includes works by LS Lowry, Eduardo Paolozzi, Edouard Manet and Henry Moore.

Meanwhile, Hammersmith and Fulham’s collection, which was valued at £18 million in 2015, is entirely in storage.

Three partners withdraw from Manchester science festival over Shell sponsorship The Museum of Science and Industry in Manchester, which organises the festival, said the partners had withdrawn their events because of the oil company’s sponsorship of its forthcoming electricity exhibition.

One of those to pull out is Carbon Co-op, a Greater Manchester cooperative that helps homeowners make their properties greener. Its events officer Luura Williams told the Guardian that the museum’s decision to take sponsorship from Shell “undermines its ability to inspire the next generation on what our future should look like. We know that we’re not alone in this view.”

The move comes after more than 57,000 people signed a petition demanding the museum reject Shell’s money. It was backed by the wildlife presenter and naturalist Chris Packham. He said: “A museum dedicated to science education should not be helping promote any company that is actively exacerbating this planetary emergency, until they show a serious proactive drive to switch to renewables.”