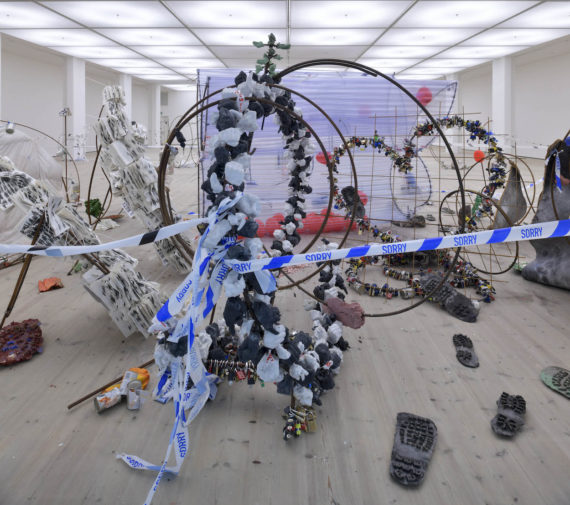 Michael Dean often begins his process with writing, and then gives his words a physical form: he creates moulds and casts of his words, abstracting them into human-scale shapes using materials such as concrete, soil, sand, and corrugated sheet metal. He also incorporates found objects into his work, while casts of small clenched fists also feature prominently.

In 2016, Dean was nominated for the Turner Prize for his exhibitions ‘Sic Glyphs’ at the South London Gallery and ‘Qualities of Violence’ at De Appel Arts Centre in Amsterdam. The SLG’s labyrinthine installation incorporated words, signs and hieroglyphs into a themed display that partly resembled a building site and partly a down-at-heel English coastline.

His Turner Prize installation, which went by the title United Kingdom poverty line for two adults and two children: twenty thousand four hundred and thirty six pounds sterling as published on 1st September 2016, was largely a reprisal of his De Appel exhibition, featuring a pile of pennies adding up to £20,436. During its installation Dean removed one coin, so that the amount represented one penny below the UK poverty line for a family of four.

In March this year, Dean was nominated for the second Hepworth Prize for Sculpture. He’ll be presenting work at the Hepworth Wakefield in October, alongside the four other shortlisted artists (Mona Hatoum, Phillip Lai, Magali Reus and Cerith Wyn Evans). The winner is announced in November.

Dean’s exhibition at Baltic, ‘Having you on’, opened as part of the Great Exhibition of the North in late June, which is when a-n News spoke to the artist. 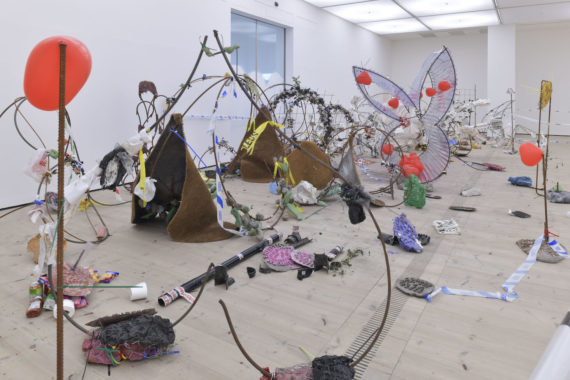 Michael, I hear you’re very unhappy about a BBC interview you’ve just had.
Yes, they wanted it to serve their own agenda to make it look like it included some chav, as in me, from a council estate. So they asked, “If someone came from a local estate and actually came in here [to the Baltic], what would they think?” As if I can speak for all trogledytes. They just have no concept of anything other than themselves.

So you told them where to get off?
Basically. Sorry, I’m not trying to make you feel uncomfortable or anything it’s just like this thing of being caught between different people… Normally I’d get an idea of who I’m talking to beforehand.

Well, you’ll be relieved that I’m not after a general human interest story. Your current installation here at the Baltic is incredibly visually arresting. How long did you take to conceive this piece?
We were talking about it two years ago, and then I got confirmation maybe a year ago, so it’s 12 months. 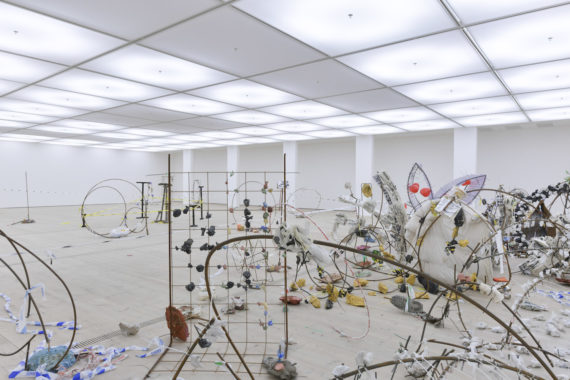 So you were first talking about it around the time you were nominated for the Turner Prize?
Exactly. They’d apparently been planning on having an exhibition with me beforehand but I took the South London Gallery show. But what I should have done is ask, “What’s the context?” I didn’t realise there was this whole fucking Great Exhibition of the North, which I’m not going to make any comment on.

The South London Gallery show [in 2016] was the first time I’d seen your work. There was an elusive narrative running through it, like a series of codes or a puzzle you had try hard to work out. Is narrative important, or do you try to resist it in your work?
I don’t try to resist it, I try to kind of wallow in it, and wallow in as many different narratives as I possibly can, because I’m looking for an experience in which there’s a range of trajectories, where there’s a whole bunch of voices going on.

It must be nerve-wracking to do this exhibition on home turf.
It’s just intense. A lot of people are disenfranchised from art, and if you start talking about art you see the look of terror in their eyes. When you asked me how long it took me to work on the show I said 12 months, but there’s also a sense of “I’m coming home, and I’m communicating to my granddad.” My brother’s going to see the show, my uncle is going to see the show, and it’ll be the first time he’s ever seen my work. So I might say I’ve been working on it since I was born. 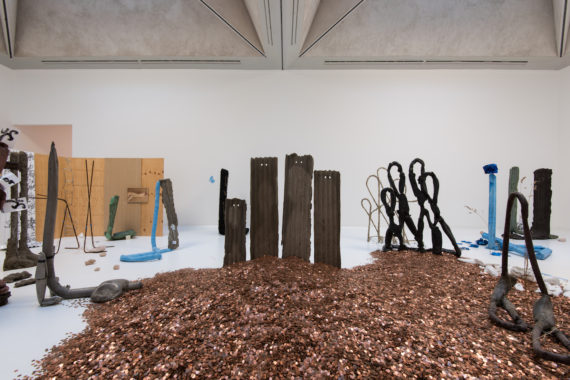 I grew up in the 165 Estate [in Blakelaw, in the West End of Newcastle], called that because it’s got 165 houses – romantic, right? – and it’s set out like a beautiful Malevich drawing, or a Leonardo da Vinci underdrawing, with planes of perspective and flat lines and so on. But seeing life against that and seeing people coming in and out of these dead-end vortexes of concrete, and seeing the things that people have left behind and having that in the show, and asking myself, “How can I turn that experience that excludes into a form of language that is trying desperately not to exclude anybody?” I know a lot of people that have a life outside of this fucking pool of middle-class light.

Your Turner Prize display in Tate Britain had to be presented in a comparatively confined space and your SLG exhibition was incredibly labyrinthine. Was it difficult to try and translate some of that into your Turner Prize installation?
It was, but I guess you take into account the nature of the Turner Prize, which is already a noose. It was more what I did at De Appel, which contained the UK poverty amount in Euro cents at that time. The only way I could talk myself into going through the hell of that was whenever everyone talked of the piece they had to say what the UK poverty rate was. Like every fucking newspaper in the country said what it was – even the BBC said what is was just when they talked about the title of the work. And that was enough for me. 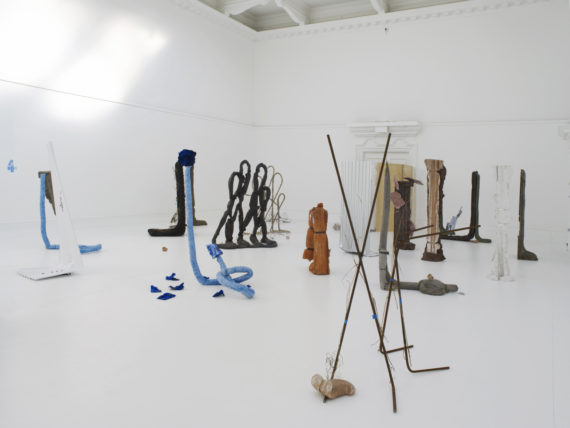 I can’t help thinking there are a lot of visual clues in this installation relating to Jasper Johns. I feel there’s an interaction with his work – the finger signs, also the general interest in signs, the heart shapes, the tin cans. Am I, er, on the right track?
No! I mean, I love his graphite drawings. When I went to university I had to look at that stuff but, no, he’s not a reference point in any way, shape or form. I mean, in terms of turning signs into visual experiences, there’s something in that, but otherwise no. I had someone say Philip Guston earlier this morning. I did look very hard at art at one point, and then when I really started making art, I stopped looking. My job is to look at the world and make art, not to look at art and make art. That’s the nature of the chip on my shoulder. That’s me stood on the pit heap looking at the world and thinking, “How the fuck am I going to make sense of this?”

So, you’d call yourself a political artist?
….Um…maybe the answer to that is art is politics and if it’s not politics it’s not art, it’s just self-indulgent horseshit that keeps the fucking system going.

Michael Dean: Having you on continues at the Baltic Centre for Contemporary Art, Gateshead, until 30 September 2018.

The Hepworth Prize for Sculpture is at Hepworth Wakefield from 26 October 2018 to 20 January, 2019 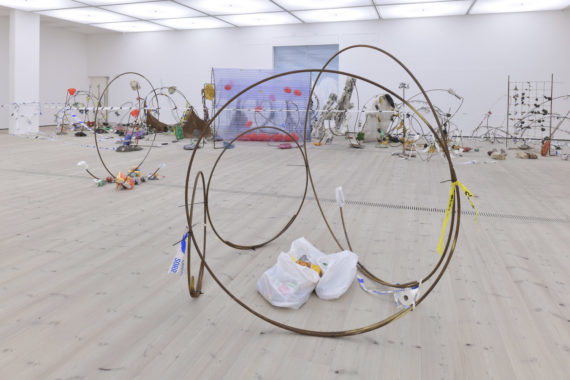 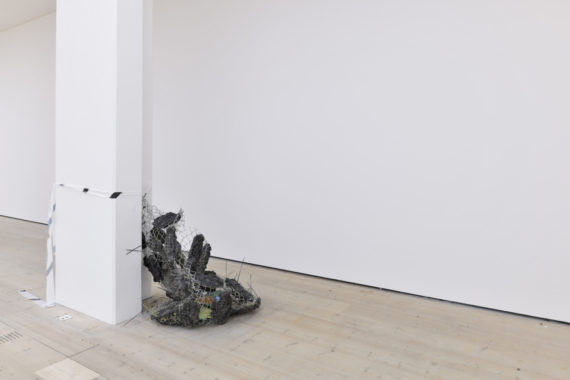 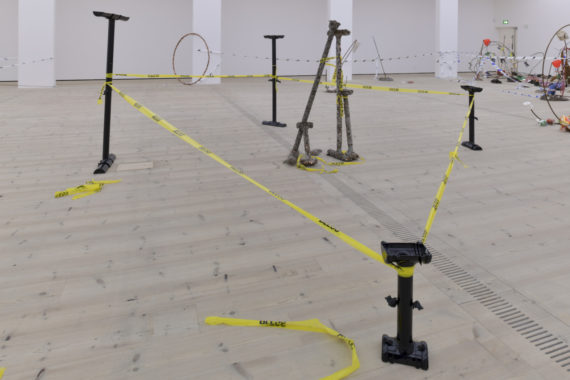