b-side festival: “A collection of works for the Isle of Portland” - a-n The Artists Information Company 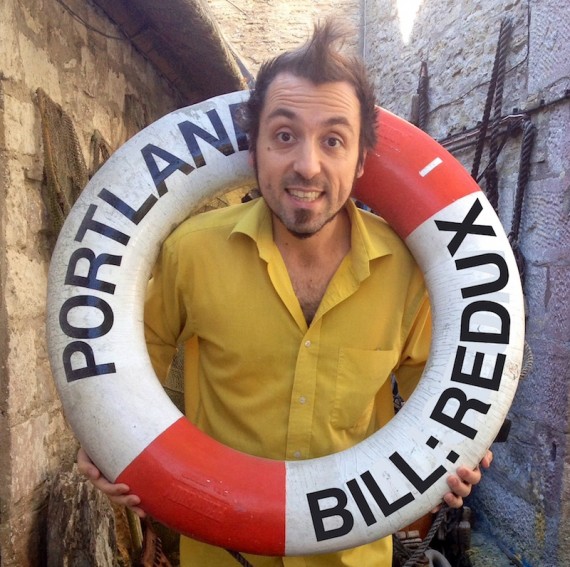 “By putting the work on Portland,” says curator and b-side director Sally Watkins, “the festival will have a very strong sense of mapping the island. A lot of artists have been involved in collecting – sounds, stories, objects, pieces of landscape – so this year’s event is a collection of works for the island.”

The fourth b-side multimedia arts festival opens on Friday 5 September in Dorset, and this year it takes place entirely on the small island of Portland, with ten days of live art, visual art, sound, film and installation.

The festival has a very distinctive artist-led aesthetic, with a strong site-specific commissioning ethos. Following an open call every two years, the team selects around 20 artists to create new work that responds to the Weymouth and Portland location.

b-side is known for its unexpected interventions that reframe the familiar, highlight the quirky and the little noticed, and experiment with new technologies positioned in non-traditional locations. The festival tends to leave the large-scale mass spectacle to others, privileging instead the nuances of audience discovery in accidental encounters and temporary experiences.

This year’s festival has something of a stellar line-up, with artists such as Richard DeDomenici, who has made his own version of the Portland Bill children’s TV show; Alex Hartley, who has also made a new work for the Folkestone Triennial (opening 161 miles down the coast on 30 August), and Alistair Gentry, who has been exploring “the folklore around the lagomorph”, a small long-eared furry animal that it is taboo to name on Portland. Gentry will be dressed in a “bizarre, slightly disturbing costume”.

The b-side model is distinctive, with five strands of activity. While the core festival showcases the new commissions every two years, b-side Encounters works with young people on projects related to the festival programme and b-side bursaries awards £500 and six months of mentoring to young artists. There is also a contextual programme which in 2013 resulted in the very successful Resonant Terrains symposium, and the b-side residencies provide time and artistic space for the development of new work.

Current residency artists are Simon Ryder, Ania Bas and Paul Soulellis. Ryder has been working in partnership with HMP The Verne, a Napoleonic citadel dating from 1847 that dominates Portland’s landscape. Soulellis has gathered stories, photographs, artwork, poetry and other material from Portland residents to produce a new free publication for distribution during the festival.

Ania Bas was resident artist at Tophill Library and The Sugar Loaf Cafe on Portland, meeting café customers and staff and writing micro narratives together. These tales of loss, hope and love are now engraved on The Sugar Loaf Café’s cutlery, to be read by customers as they drink their tea.

“There is intensity with having artists working in partnerships within our location that really demonstrates what site work is about,” Watkins explains. “We wanted the commissions to be developed as part of the strength of those relationships. We gave ourselves and our artists a long lead time to find the material for the work and to properly explore it. We have all gone on journeys.”

The three recipients of the b-side bursaries are also included in the festival programme this year. They are Emma Riley, who has produced environmentally sensitive textiles positioned at various points on the island; Lisa Crews, who works with traditional printmaking techniques; and Isla Chaney, a sculptor.

“The bursary artists are young or early career artists, or artists who wanted to shift their practice from gallery based to site-based work. A lot of applications were from visual artists who wanted to move up in scale. We felt strongly that those kinds of transition need support and that we are in a good position to offer that support.”

b-side is a community interest company (CIC) created and run by a group of independent artists who came together in 2008. Alan Rogers, then the arts development officer of Weymouth and Portland Borough Council, and Julie Penfold, director of PVA Media Lab, applied for funding to run a pilot festival to explore the Weymouth seafront. They brought in Sally Watson, an independent artist, Amanda Wallwork of Sherborne House Arts and Rosie Russell of Departure Arts to help make it happen, with Sandy Kirby recruited as festival producer.

This team has been together ever since. Nothing similar had happened previously and it was the culmination of many years work to get it off the ground. The pilot was successful and a Grants for the Arts bid enabled a second, larger festival in 2010. Following this, the team have been successful in securing Arts Council England NPO funding in both the first and most recent round.

“We were very clear that we wanted to commission new site-based work that explores the ecology, history and social context of Weymouth and Portland,” explains Watkins.

“I came from teaching in Dartington College and I wanted to see some of the artists and artworks I’d seen come to Weymouth and Portland, which had been an artistically impoverished area. We all really wanted to try and generate something for the area. A lot of site-based work by its nature invites participation and we find that very exciting.”

As the only NPO in this part of Dorset, b-side has succeeded in doing just that. At the same time, the team has kept their distinctive ‘b-side/flipside’ artist-led aesthetic, while doing what they can to develop the local arts ecology.