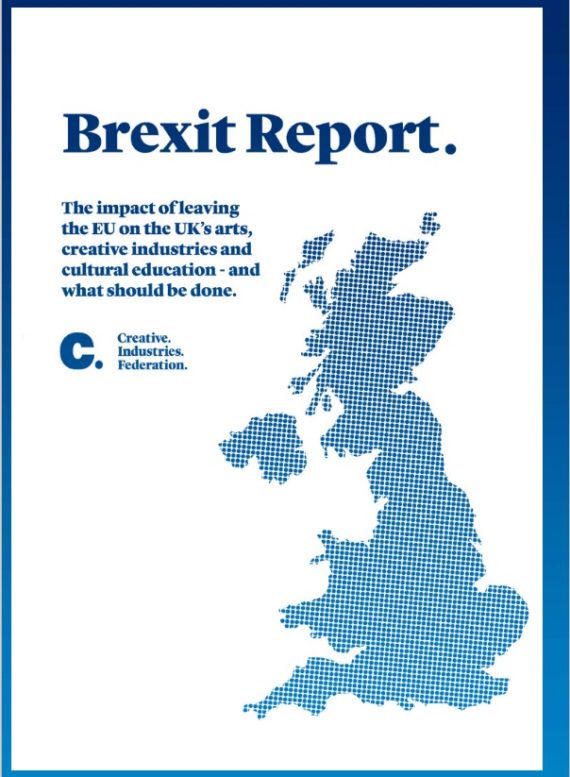 A new report from the Creative Industries Foundation has identified freedom of movement and a loss of EU funding as two key concerns for the sector in a post-Brexit landscape.

The 73-page report outlines how the creative industries can ‘survive and thrive post-Brexit’ and was produced from evidence provided by around 500 contributors at 11 meetings held by nationwide. Information and opinions were also gathered from a members’ survey.

The foundation, a not-for-profit company with more than 1000 members from across the sector including a-n, is also calling for the government to use the Brexit decision – which 96% of its members voted against – as an opportunity to ‘reboot education and training’ for young people.

John Kampfner, the Federation’s chief executive, said: “The creative industries are a massive opportunity for the UK government. This is the fastest growing sector of the UK economy and includes all the things that Britain is famous for – from our music to our films, television and heritage.

“We want to work with government to safeguard the jobs, the revenues and the prestige the creative sector offers.”

Commenting on the Brexit Report, he added: “While the political circumstances are constantly changing, this report produces initial recommendations and explains how the UK’s creative sector currently engages with the EU so that sensible decisions can be made.”

CIF’s founder and chair Sir John Sorrell said: “It has taken two decades and more to turn our creative industries from an afterthought to a key driver of wealth and global success. To imperil that would be to imperil our wider economy.

“That is why we need to be at the heart of the new government’s industrial strategy and negotiating priorities in coming months.”

The report, which was yesterday presented to Karen Bradley, secretary of state for culture, media and sport, has a number of recommendations, and calls on the government to:

• Provide young people with the skills needed for jobs in the creative sector, addressing existing skills shortages in areas such as animation and visual effects

• Uphold intellectual property rights including copyright in trade deals, especially with new markets with bad infringement records, and remains proactive in negotiations on the Digital Single Market and other regulatory issues with major implications for the sector

The CIF report also highlights a variety of members’ concerns, many of which echo those expressed by a-n’s own members in July’s a-n members’ EU Referendum Survey.

• The impact on finances and international standing of UK higher education

Responding to the launch of the report, Tate director Sir Nicholas Serota, a CIF board member and soon-to-be new chair of Arts Council England, stressed the importance of freedom of movement for those working in the arts.

“The success of Tate in recent years has depended very much on our ability to employ people from across the EU at all levels of the gallery,” he said. “For us, this is an essential ingredient in creating one of the world’s great galleries.

“We attract significant numbers of international visitors and a staff with different kinds of cultural and educational experience helps us to understand what engages these audiences.

“As the government works out arrangements for the future, we would not want any artificial barriers erected which might make it harder for us to attract the skills that we need in order to serve our public well.”

a-n, meanwhile, will continue to listen to and work with its members to develop responses to the Brexit decision, in order to best represent the concerns and challenges that lie ahead for artists and the visual arts sector.