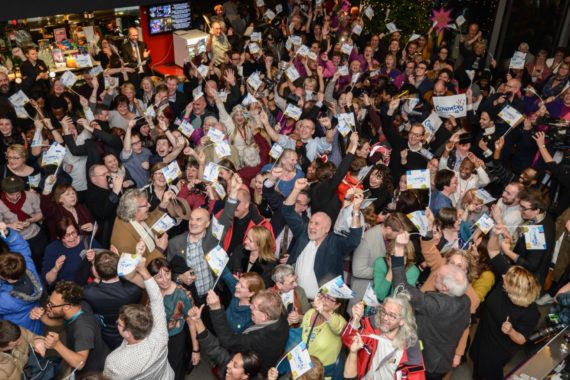 Coventry named UK city of culture 2021 The West Midlands city sees off competition from Paisley, Stoke-on-Trent, Sunderland and Swansea to take title. It follows Derry and Hull as the third UK city of culture, a programme modelled on the European capital of culture concept which had a significant impact on Glasgow in 1990 and Liverpool in 2008. The announcement was made on the BBC’s One Show, with arts minister John Glen saying the award was “an incredible opportunity for Coventry to boost investment in the local economy, grow tourism and put arts and culture centre stage”.

Nicholas Serota criticises Prime Minister Theresa May over her handling of Brexit Quoted in an essay in the newly published book on the 2017 Verbier Art Summit, which brought together leading art-world figures in the Swiss resort, the Arts Council England chair said that the “mood of optimism” of 2016, when Tate Modern inaugurated its new extension designed by the Swiss architects Herzog & de Meuron, “has been extinguished”. Serota explained that since the Brexit referendum, “the meaning and consequences of departure [from Europe] have become more apparent, but the government led by Theresa May has taken the close referendum vote as an absolute mandate to leave, apparently with no concessions or doubts.”

Elisabeth Murdoch joins Arts Council England Daughter of media mogul Rupert Murdoch is one of seven new appointments to the national funder’s governing board. Murdoch is the former Managing Director of Sky Networks and Chief Executive of Freelands Foundation, which last week announced a £1.5m fund for emerging visual artists. She took up her four-year post on 1 December.

New York art museum refuses to remove painting of girl after ‘voyeurism’ complaint A petition has called for Metropolitan Museum of Art to replace Balthus’ Thérèse Dreaming, which shows a girl leaning back on a chair with her underwear visible. Mia Merrill, the petition’s author, suggested that the painting be replaced by one created by a female artist of the same period. However, museum spokesman Ken Weine said the decision to not remove the painting provides an opportunity to reflect on today’s culture.

Buyer of £341m Leonardo da Vinci painting revealed Little-known Saudi Prince Bader bin Abdullah bin Mohammed bin Farhan al-Saud bought the work at Christie’s postwar and contemporary art evening auction last month, making it the most expensive art work ever sold. According to a biography of Bader on the website of Saudi Arabia’s Energy Holdings International, the prince is described as one of the country’s ‘youngest entrepreneurs’. He is chairman of the founding committee of a local consortium which plans to build a fiber-optic network.

Getty and Skirball centres close as California wildfires prompt thousands to evacuate The fire grew quickly with the help of 25-mile-per-hour winds, with a major portion of the 405 freeway, which runs below the hills on which the centres are situated, being shut down as officials tried to contain the blaze. The wildfires have destroyed at least 150 homes so far, displacing 27,000 people, and consuming more than 65,000 acres in the process.

Artist alleges Raghubir Singh assaulted her, stages #MeToo performance at his retrospective Jaishri Abichandani staged a performance in front of the Met Breuer to speak out about an incident with the well-known photographer. The artist described it as a “feminist participatory public performance”, which took place after she alleged Singh had sexually abused her in the 1990s. The Metropolitan Museum of Art, which administers the Met Breuer, expressed its support for her right to speak out.