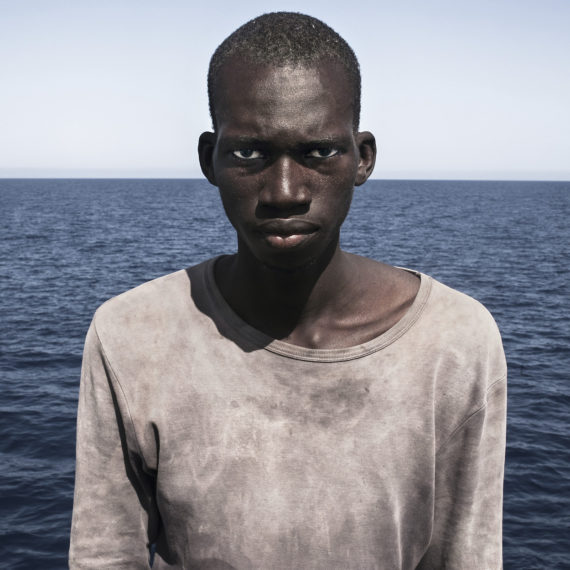 Questions over $2.2m Marina Abramović raised to build cancelled art centre Money raised towards the Marina Abramović Institute for the Preservation of Performance Art (MAI) in Hudson, New York, was spent entirely on schematics and a model by architect Rem Koolhaas. According to the New York Post, $1.5 million of the funds raised came from private donations, including from musician Jay-Z, while another $661,452 was raised from 4,765 backers on Kickstarter. However, because the Kickstarter campaign was specifically earmarked for ‘the design process’ of the MAI, it will not be returned to the project backers.

Portrait of rescued migrant wins Taylor Wessing Photographic Portrait Prize César Dezfuli has won the tenth anniversary edition of the prize for his portrait of Amadou Sumaila, a migrant rescued in the Mediterranean Sea off the Libyan coast. The Spanish photographer was presented with the £15,000 prize during an awards ceremony at the National Portrait Gallery, London. The second prize was awarded to Welsh photographer Abbie Trayler-Smith for her portrait of a girl fleeing ISIS in Mosul, Iraq, while Maija Tammi from Finland won third prize and the John Kobal New Work Award for a photographer under 35, for her portrait of a Japanese android called Erica.

Manchester’s Whitworth Gallery welcomes millionth visitor The University of Manchester gallery welcomed 16-year-old student Farrzana Begum on 13 November, its millionth visitor since reopening after a £15m extension on 14 February 2015. Begum was greeted by staff and received a Raqib Shaw print, a Raqs Media Collective catalogue, and complimentary tea and cake for two in the gallery’s café.

Jerwood Charitable Foundation appoints new director Theatre producer Lilli Geissendorfer has been appointed as the organisation’s new director, replacing Shonagh Manson who left in October to join the Mayor of London’s culture team. Geissendorfer, who will start on 22 January 2018, is currently Producer at London’s Almeida Theatre and has also worked as Relationship Manager for Theatre at Arts Council England.

Anti-gentrification activists protest Laura Owens exhibition at the Whitney Museum Alliance of activists from Los Angeles and New York protest the role of the artist and her dealer, Gavin Brown, in artwashing the gentrification of working-class neighbourhoods. They were at the forefront of the influx of galleries into LA’s Boyle Heights neighborhood with their space 356 Mission. Brown’s New York locations, in Chinatown and Harlem, have set off similar allegations.

Franz von Stuck painting stolen from Hitler to be sold at auction Portrait zweier junger damen (Portrait of two young girls) was stolen from Munich’s Führerbau, the Nazi party’s headquarters, on 30 April, 1945, the day Adolf Hitler killed himself. It is being put up for sale by the Cologne auction house Van Ham. The painting was originally meant for the collection of the Führermuseum in Linz, an art museum planned for Hitler’s hometown that was never erected.

Swiss journalists reporting on opening of Louvre Abu Dhabi detained for two days Journalist Serge Enderlin and cameraman Jon Bjorgvinsson were detained last Thursday after taking pictures at an open-air market in Abu Dhabi. Enderlin told Al Jazeera the pair were questioned over their coverage of migrant workers: “All we wanted to do was put the opening of the Louvre in a wider context – as a flip-side to the glitz of the museum we wanted to show the migrant workers who actually built it.”

Christie’s £365m Impressionist and Modern sale hits highest total since 2007 Of 68 lots offered, 60 sold over the course of the nearly three-hour auction. The top lot was Vincent Van Gogh’s Labourer dans un champ, from the Nancy Lee and Perry R. Bass collection, which sold for over £54m (£62m with fees).