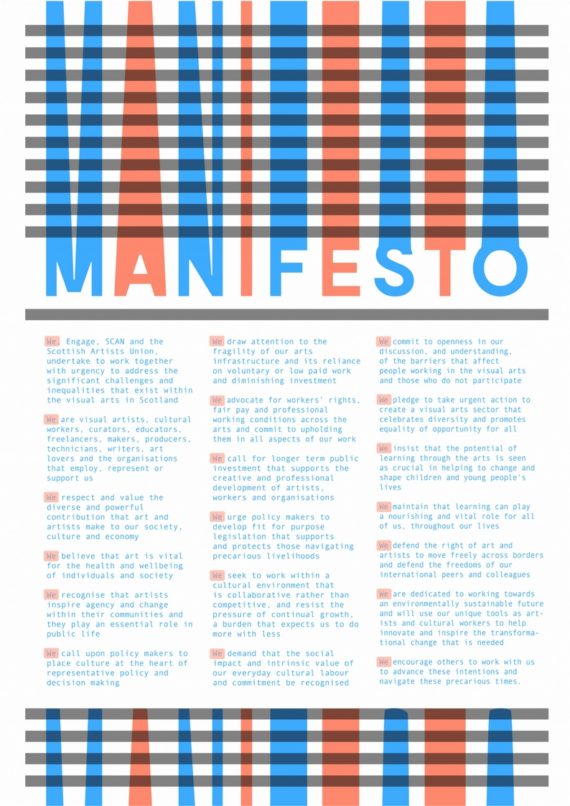 Scottish Contemporary Art Network launches Visual Arts Manifesto In partnership with Engage and the Scottish Artists’ Union, the Scottish Contemporary Art Network (SCAN) has published a manifesto for the visual arts in Scotland. The manifesto has been developed in response to the particular challenges facing the visual arts in the country and sets out a series of policy demands. It is described by SCAN as “a direct response to the current challenges facing the art sector as a whole and our first public response to the new National Culture Strategy consultation process”.

The 19-point manifesto includes a call for policy makers “to place culture at the heart of representative policy and decision making” and draws attention to the “fragility of our arts infrastructure and its reliance on voluntary or low paid work”. There are also commitments to “workers’ rights, fair pay and professional working conditions” and to “the right of art and artists to move freely across borders”.

SCAN director Seonaid Daly said: “We passionately believe in the important, intrinsic value of art and artists within society. This needs [to be] better understood and articulated, championed, and protected. But we also acknowledge change is needed. This manifesto makes public our commitment to work together, with others and with urgency to address the significant challenges and inequalities that exist within the visual arts in Scotland.”

Daly added that the manifesto was “a live document that will be updated regularly” and that SCAN is committed “to continuing our discussions with others, listening to and understanding different approaches and experiences”.

Steve McQueen to make film tribute to Grenfell Tower fire victims The Turner Prize winning artist and director behind films including the Oscar-winning 12 Years a Slave began filming on Monday. A statement on the project’s official website, explains: “This is not a fiction film. It is a straight recording of the Tower as it is now before it is covered up. It has no narrative story, no people or characters in it, no dramatization. This is to record this moment in the community’s history and make a lasting memorial to the tragedy. This would be done with respect to those who lost their lives and the wider community.”

The  project is being self-funded by McQueen, who was born and grew up in West London on the White City Estate. The film, which has the working title, Grenfell Tower, will not be a commercial project and will not be sold or screened on TV. The statement continues: “It will be shown in a museum and will be accessible in London for the whole community to attend and view. It will not be shown for at least two years. The only reason to film now is before the scaffolding and covering obscures the Tower.”

Iran opens its first museum dedicated to a solo female artist Monir Shahroudy Farmanfarmaian, who has received widespread international attention during decades of exile, had many of her works confiscated and destroyed after the 1979 Islamic Revolution. Now the Monir Museum has opened in Tehran at the Negarestan park gardens, displaying 51 works, including her signature mirror mosaics, abstract monotypes and reverse glass paintings.

New York’s Jewish Museum ends relationship with curator Jens Hoffman The curator has faced a number of accusations of sexual harassment from staff at the museum. A statement from the museum said: “The Jewish Museum has completed its review of the allegations regarding Jens Hoffmann and on December 17, 2017, terminated its relationship with him. As this is an internal and confidential matter, we will not be sharing further details.”

Mural censored at the Bi-City Biennale of Urbanism\Architecture A mural by the artist Hu Jiamin at the entrance to the biennale’s main venue has been covered up due to its political nature. The work by the Chinese-born artist – who has French citizenship – includes references to government surveillance and the Chinese dissident and Nobel Peace Prize laureate Liu Xiaobo. Both Hu and his wife, who was helping him paint the mural, were “taken by the authorities” according to a report on the ArtAsiaPacific website.