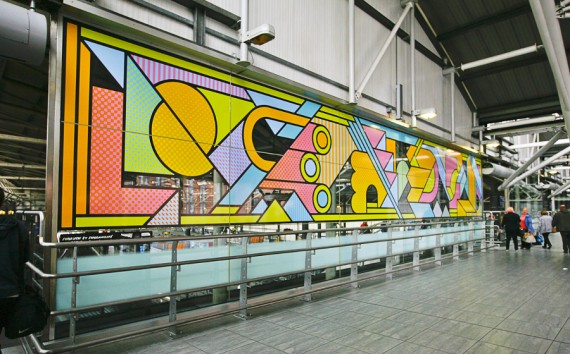 For the city of Leeds – currently bidding to be European Capital of Culture 2023 – hosting the opening of British Art Show 8 is a bit of a coup. According to Judith Blake, leader of Leeds City Council, it provides “an ambitions statement about our credentials as a city that celebrates and promotes art and culture”.

The city’s art scene has come a long way in the 25 years since Leeds last hosted the British Art Show, and, as Blake asserts, the exhibition provides a “once-in-a-generation opportunity to showcase this to the world” and to “celebrate the quality and diversity of the sector taking in galleries, studios, pop-ups, and artist collectives”.

Set up in 1979 by the Arts Council of Great Britain, the British Art Show began with the aim of bringing the best of British contemporary art to ‘the regions’. Now supported by Hayward Touring, the exhibition is no longer framed in terms of a centre-margin dichotomy; curators Anna Colin and Lydia Yee have selected a diverse, international range of artists that are representative of the globalised networks in which artists operate.

That said, while its stated aim is to showcase the work of 42 artists ‘who have made a significant contribution to contemporary art in the UK over the past five years’, over two thirds of exhibitors have their UK base in London. For existing artists and arts organisations in Leeds, then, the exhibition brings both opportunity (audiences, publicity, funding streams) and dilemma (do I/we want to be part of an unofficial ‘fringe’?).

However, unlike previous incarnations that have seen the exhibition spread across multiple venues, this show is exclusively housed in Leeds Art Gallery, putting the city’s large contingent of temporary projects and arrange-by-appointment venues at risk of being overlooked.

Leeds City Council has addressed this by investing in a ‘Leeds programme’, with funding opportunities, wayfinding and branding activities designed to improve visibility and tell an overarching story of arts (read ‘cultural activities’) in the city.

Leeds Inspired has invested in a public art commission at Leeds train station (Supermundane, see image above), with further commissions at Leeds station and Kirkgate market, funded by the council and Leeds Improvement District, still to be announced. All projects and happenings coinciding with BAS8 have been subsumed under the banner ‘Unfold’, an online listing and printed catalogue including interviews and contextual essays.

While admittedly more coherent than the four commissioned ‘Untitled’ publications produced in the lead-up, these civic efforts have a whiff of ‘more is more’ about them, with a raft of ‘creative contenders’ clamouring to be seen and heard. (For example, Leeds’ annual Light Night, boasting 50 free family-friendly events and cultural activities, is heavily featured in Unfold and scheduled to coincide with the first day of BAS8).

Within this cacophony, artist-led initiatives and temporary spaces find themselves in a bind: they can choose to get on board and become part of the brand, or they can be left out completely.

Funding options come with conditions, stressing collaboration, inclusivity and visibility, criteria somewhat at odds with the independence and nonconformist nature of a well-established DIY scene. Unsurprisingly, the scene has responded in its usual myriad fashion, with some organisations explicitly dealing with the proposition of BAS8 and others carrying on regardless.

The Tetley (the city’s largest and most visible arts venue – aside from Leeds Art Gallery and the Henry Moore Institute – currently transitioning from its artist-led roots to a more institutionalised structure) tackles BAS8 head-on with The Feast Wagon (7 October – 10 January). This exhibition’s stated intention is to look at ‘identity and nationhood against a backdrop of today’s globalised contemporary art scene, with its international biennales and large-scale touring exhibitions such as the British Art Show’.

A more divergent approach is taken by another of Leeds’ regularly funded visual arts organisations, East Street Arts, which runs multiple studio spaces, a project space and events within and beyond the city. It avoided clashing its open studios weekend with BAS8, as artistic director Jon Wakeman explains: “We moved it to save any confusion over being considered as the ‘fringe’ and also being aware of trying to compete with the ‘noise’”.

The question posed by its current exhibition at Patrick Studios, Primitive Propositions: A Proposal of Exhibition, by Jeffrey Charles Henry Peacock (aka Dave Smith and Thom Winterburn) might be interpreted as a subtle snub: ‘Is there a way to engage in the distribution of our works in the context of an exhibition that remains critical and resistant to exhibitionism as it prevails in current arthood – a self-certifying, self-aggrandising celebration…?’.

On the other hand, ESA acknowledges the potential advantages of the ‘BAS effect’ for artist-led initiatives, and is supporting projects by Live Art Bistro (hosts of the alternative after party) and Project Radio (more in a moment). ESA’s project in the pipeline, Art Hostel, and its regular First Friday events, will also provide ways for locals and visitors to explore visual arts in Leeds from November.

Project Radio and About time are collaborative satellite projects that embrace the BAS hype while maintaining a healthy level of autonomy, both testaments to the tenacity of Leeds’ artist-led scene.

Created by artists Marion Harrison and Sophie Mallett, Project Radio provides ‘a shared space for artists and public to make radio’, including residencies, live broadcasts, interviews and workshops. The station will operate out of &Model, a three-floor gallery with a shop front located almost directly across from Leeds Art Gallery, broadcasting live from 7-25 October, Wednesday to Sunday, 2-5pm (and online thereafter).

The programme is interesting and varied, from Live Audio Archive’s Soundcamp, a live-stream collaboration using hydrophones, forest cams and a solar-powered stream set up in the local Kirkstall valley, to Chronophobia, a broadcast by commissioning and publishing body SPUR, addressing our fear of the future through literary predictions, weather forecasting and fortune telling.

About time (funded by Arts Council England and Leeds Inspired), offers critical purchase while providing an entry point into artist-led activities in the city. The programme is spearheaded by visual arts commissioning organisation Pavilion, curatorial collective Mexico, and SPUR, including collaborations with Assembly House Leeds, Basement Arts Project, Black Dogs, Leeds Animation Workshop, Left Bank, Pyramid of Arts, SEIZE and Set The Controls For The Heart of The Sun, among others.

Gill Park, director at Pavilion, explains: “We wanted to take a strength in numbers approach to profile the critically-interesting work being produced in Leeds and to experiment with working together around a shared curatorial theme.”

The programme has a sharp conceptual focus: it examines the relationship between art and globalization, and the paradoxical movements of a world that is simultaneously speeding up and slowing down (compare, for example, the pained progress of refugees fleeing Syria with the instantaneousness of online information-sharing).

Park defines the project as “a celebration of artists and producers in Leeds” while also “taking a critical position in relation to the global contemporary art context – how can we resist the acceleration of the globalised art world and its flattening of difference?”.

Reflecting the peripatetic nature of its participating organisations, a number of About time projects are ‘floating’ (Georgie Grace’s video A wonderful future where you have back up copies will be available on SPUR’s online gallery, Landing Site, throughout BAS8).

Other projects productively exploit relationships with partner venues (Ilana Halperin will perform Felt Events at Leeds Museum, and the four-part screening programme Images and Journeys will be shared across Leeds Industrial Museum and Hyde Park Picture House). A temporary space, Timeshare (above Brunswick bar), will also be open for the duration of About time, acting as a hub for the project and a platform for experimentation.

In contrast to this rich, esoteric (if at times slightly confounding) style of collective programming, artist-led SEIZE Projects is taking the more ‘visible’ approach with Paste, showing the work of 15 artists on poster drums around Leeds for the first two weeks of BAS8, alongside a collection of digital online works.

The exhibition taps into its ‘post-internet/object’ theme, ‘addressing ideas surrounding the virtual and real in contemporary art practice, and their crossover in everyday life’. Their strategy underlines the need for artists and small organisations in Leeds to make the most of the increased footfall, giving exposure to the independent scene that lies frustratingly just under the surface.

Clearly, there is no single, coherent response by Leeds arts organisations to the arrival of the British Art Show. The most engaging projects avoid blindly jumping on the publicity bandwagon by combining a push for increased visibility with focused critical inquiry.

Unwieldy collaborative efforts dominate, but are balanced by a number of considered curatorial voices demonstrating their ongoing work with artists from Leeds and beyond (but without projecting a particular ‘regional’ message).

In the words of Zoë Sawyer, curator at Tetley and co-founder of Mexico: “There is sometimes a worry on the part of the city’s larger institutions and council that Leeds’ art scene isn’t accessible enough to those operating outside it.

“But,” she continues, “the art scene doesn’t have to come across as a cohesive, unified whole, and BAS8 is bringing local artists and the diverse independent scene the critical attention they deserve.”

CORRECTION: (8 October) The first sentence of the seventh paragraph, beginning ‘Leeds Inspired has invested in a public art commission…’ has been amended to clarify the funders and status of further commissions in the city.

Lara Eggleton is a lecturer, art writer and historian based in Leeds.