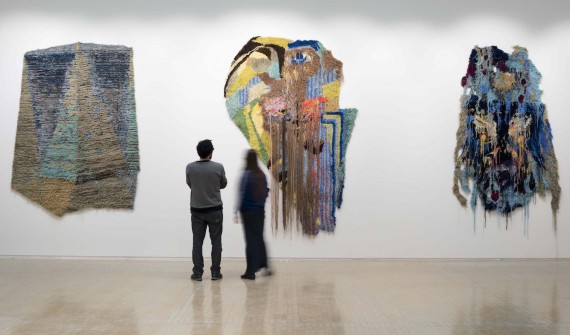 Tom Cruise, a colour wheel, a dog show, a decorative tea tray; while superficially unrelated, the collection of images in Andrea Büttner’s Critique of the Power of Judgement provide an apt metaphor for British Art Show 8 as a whole. Looking at Büttner’s series of prints, visual connections, associations or invented narratives proliferate.

The exhibition includes the work of 42 artists who have ‘made a significant contribution to art in this country over the past five years’. Exhibits range from tufted rugs (Caroline Achaintre, pictured above) to ant-farm encasing sculptures; figurative paintings to performance pieces, plus a lot of moving-image artworks.

To impose a single narrative on the exhibition’s diversity would do it a disservice, yet common threads are discernible. So, as well as individual stand out pieces, enjoyment also comes from the satisfaction of making connections.

Büttner’s pictures do, in fact, have an underlying logic. They represent images referred to in Immanuel Kant’s 1790 Critique of Judgement, where he outlines an aesthetic theory proposing the independence of beauty from utility. Some images are drawn from his personal library, others sourced online.

An adjacent artwork, by Adam Broomberg & Oliver Chanarin, refers to Sigmund Freud. The artists employed a forensic team to photograph trace evidence from the psychoanalyst’s couch.

Resultant grainy photographs are displayed on a telex machine, with one enlarged into a wall-hung tapestry – apparently recalling the rug that covers the iconic couch. Adopting the language of science, the artists investigate what cannot be objectively pictured – namely, the subjective yet often culturally shared meanings we ascribe to objects.

Freud and Kant both highlighted how objects and images may become bearers of special significance, in excess of their rational or use value. In our neoliberal culture, where things are measured in economic terms, it’s notable that artists continue to test and foreground how art can be meaningful beyond these parameters.

Ciara Phillips asserts the collaborative value of making, working with local groups to produce a printed publication, available free from the gallery. Its installation, displayed with slogans such as “friends warm friends” and “cold hard cash” brings vim to the Victorian entrance hall. Post Forma by Martino Gamper, invites visitors to bring broken items to be repurposed by local artisans. On the day of opening it was slickly installed, but had not yet evolved into anything interesting.

Stuart Whipps, collaborating with ex-workers from Birmingham’s Longbridge car plant, will restore a GT mini (currently a shell, pictured above) by the end of British Art Show 8. The premise that the 1979 vehicle can become the repository of a narrative about Margaret Thatcher (elected prime minister the same year) and her turbulent relationship with British industry is interesting, but debatable.

Richards’ Raking Light combines archive film footage and sound with his own diaristic shots in a poetic, semi-abstract assemblage; there’s footage of a tourist boat, a clump of people approaching Niagara Falls. This is no reprisal of an unmediated ‘sublime’ but rather a study in the ongoing allure of picturing landscapes. Drew’s multi-screen Sequencer pleasingly melds textured rock surfaces and simple animation with an ambient soundtrack to explore landscape ‘in an age of the technological, rather than the natural, sublime’ (sic).

Curators Anna Colin and Lydia Yee define the exhibition theme as “the changing role of the object at a time of increasing convergence between the real and the virtual.”

Yuri Pattison tackles this head on with The Ideal, filmed at a Bitcoin mine in Kangding, China/Tibet, showing the fossil fuel needed to create this virtual currency. It’s an important revelation, yet Pattison’s work – its mobile-phone footage on a flat-screen monitor mimicking the setup of a data centre – is neat but unsatisfying; it has an internal formal and conceptual logic but points to the state of the world without comment.

Children of Unquiet (Promo) by Mikhail Karikis from mikhail k on Vimeo.

In contrast, Mikhail Karikis’ Children of Unquiet turns footage of a defunct geothermal power plant into poetic advocation of unproductive labour. Children play in redundant plant buildings, perform a gorgeous musical composition (with sounds representing features: ‘land’, ‘village’, ‘factory’) and read aloud about a species of wasp that pollinates orchids for no perceptible gain. Play and song stand as examples of activities undertaken without profit motive. An evocative paean to the future, the film is a highlight of the show.

There are other notable pieces, including Alan Kane’s tombstone benches (their symbolism seemingly overriding their function, as no one sat on them during my visit). Rachel Maclean’s film Feed Me (pictured below) – a dystopian but saccharine whirl of performance and digital animation, in which the artist plays all of the characters – is darker than her recent works, covering territory including child grooming, surveillance and zombie fiction.

Simon Fujiwara’s film, Hello, juxtaposes an interview with Maria (an exuberant litter-picker from Mexico) with Max (a downbeat CGI specialist from Germany) to examine western presumptions about lifestyle. An animated, disembodied hand scrolls and flicks between the interviewees, mid-flow. In our age of proliferating information, do we really have time to listen and empathise?

In the face of such bleakness, thank goodness for Bedwyr Williams whose film Century Egg brings a measure of absurdity. Created in response to the collections of University of Cambridge Museums and using artefacts to structure his film, Williams considers the significance – the readings and misreadings – of historical objects.

The artist/narrator, depicted as the Tollund Man, imagines a disaster striking a Cambridge drinks party and speculates what a future archeologist might make of preserved partygoers fallen whilst doing the conga. What clues would their stance, their dress and the objects around them provide for this future emissary?

Should the same disaster strike the gallery during this exhibition, the evidential remains would be hotchpotch. Bodies, yes, and a few material artworks, but mostly fragments ​of redundant hardware – the symbolic significance of our contemporary representations lost.