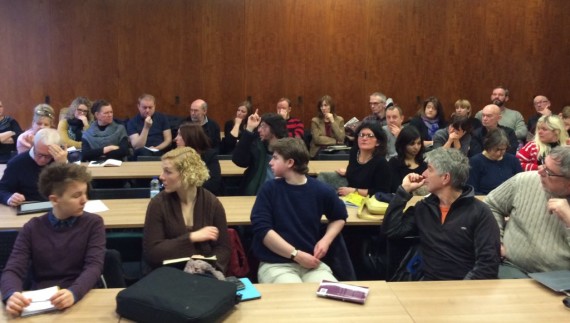 In December, Cardiff Council announced its budget proposals for 2016-17, which it says are aimed at meeting a budget gap of £45.6m. A deadline for consultation has been set for midnight on 11 January. The proposals included specific funding cuts totalling £143,000 to Artes Mundi (£20,000 cut), Cardiff Contemporary (£87,000), and Cardiff Singer of the World (£36,000). Other, unspecified cuts to more arts and cultural organisations in the city will total £700,000.

Following these proposals and a local What Next? meeting, Laura H Drane Associates called today’s meeting with the aim of creating a coordinated response from citizens, organisations and the cultural sector. Drane, an independent producer and consultant, said the meeting was vital as “at urgent times like this I wish we had an even stronger united voice and message”.

Despite a familiar atmosphere of frustration at being in similar situations before, positive action was urged. Geraint Talfan Davies, chair of Welsh National Opera, called for immediate face-to-face meetings with Cardiff Council leaders to ask them “what would be left in the budget” and “what would it be spent on”, as there was a vagueness to the figures and what will be cut and where.

Art consultant Emma Price voiced common concerns about Cardiff’s future, asking “What will Cardiff offer visitors and students culturally?” Rebecca Gould (British Council Wales) warned that, without a strong arts ecology, Cardiff would be unlikely to attract investment such as the € 4.1m Erasmus+ education, training, youth and sport funding that has brought over 90 jobs to the Welsh capital.

The financial impact of cultural events and building the arts ecology across Wales was discussed, as was the need to bring together facts and figures from all organisations as a persuasive tool. As well as noting the economic, social and educational power of culture in Cardiff, Ruth Garnault stressed that it “has a huge knock-on effect across the regions, across the whole of Wales”.

Drane urged the meeting to “use their collective and individual networks to encourage art and non-art audiences” to campaign, using the recent library closure campaigns and its local media support as an example. Price called for “creative protests” across the city as a way of attracting public support.

Curator Mike Tooby urged a note of caution in the language used in public campaigns and publicity events, especially when attracting empathy from a wide audience. “Instead of cuts, say withdrawal of funding; instead of asking have you participated in an arts event, say have you experienced an arts event in any way.”

The hope was expressed that a long-term strategy would emerge that might allow the cultural sector to have a more engaged relationship with Cardiff Council, which in 2014 had made bold claims for the Cardiff Contemporary art festival, with ambitions for it to be a ‘world class event’.

Other organisations attending said the Council’s ongoing support for culture in Cardiff was vital as they used the local authority funds as leverage and match funding.

The Cardiff Council budget proposals come as the Arts Council of Wales has been hit with a 5% cut as part of the Welsh Government’s draft budget for 2016/17. The main funder for the arts in Wales, ACW will lose £1.5 million, reducing its budget for the year to £30.3m.

ACW chair Dai Smith has expressed his disappointment with the reduction. He warned that the new funding settlement only covers one year, adding that he remained “very concerned about the ongoing pressure on Welsh Government funding”.

Drane echoed Smith’s sentiments in her closing remarks: “I’m very worried we will all be here again next year discussing new cuts,” she said.

She finished by quoting John McGrath’s blog as he left his role as artistic director at National Theatre Wales to become director of Manchester International Festival. He said: “Commitment to the arts can stimulate and reposition a city and, perhaps, a nation… now is a moment for pushing forward, not hedging bets.”

Correction: In an earlier version of this article we stated that no-one from Cardiff Council was at the meeting. This was incorrect – a representative of the Council was present.