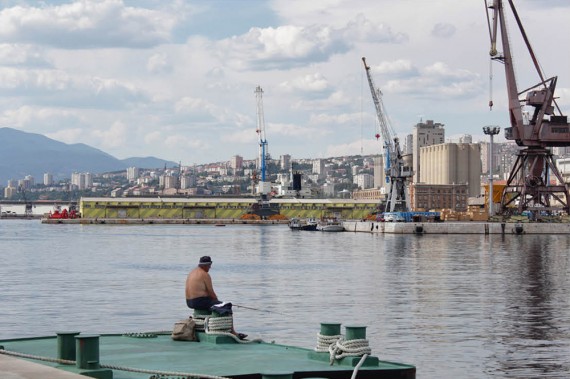 Described as a traditional gallery space, radio broadcaster and television channel rolled in to one, Corners Live is a new digital platform that presents countless possibilities for engagement with ongoing artworks.

An extension of Newcastle upon Tyne-based ISIS Art’s contribution to the European Commission-funded collaborative project Corners – involving over 30 organisations and 55 commissioned artists from across the continent – the platform was created using open source tools.

Co-creator Dominic Smith, digital platform curator for Corners, explains: “Real time connectivity and continuous digital media now have the potential to create a genuine sense of cultural mobility. We have a real opportunity to build a set of digital tools and frameworks upon which artworks can thrive.”

Corners was initiated in 2010 by Intercult in Stockholm, Exodos in Ljubljana, POGON in Zagreb, Drugo more in Rijeka, City Culture Institute in Gdansk, and Umeå 2014 – European Capital of Culture. ISIS leads on coordinating digital engagement and as executive co-director Sharon Bailey explains, the organisation is responsive “to people’s desire to engage with contemporary art in a new and meaningful way.” 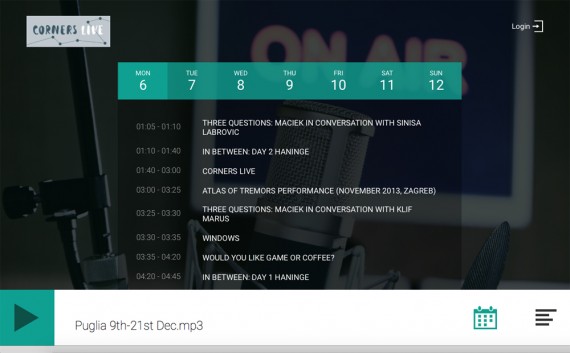 By working closely with programmers Sourcefabric, ISIS is doing just this. So far the digital platform consists of two elements – a visual storytelling tool and Radio Corners, a 24/7 rolling schedule of interviews, sound art, music and field recordings from Corners’ artists.

“Both are two points on a triangle,” says Smith. “The Storyteller uses a narrative framework in which to ‘hang’ the artists’ work. The radio builds communities by crossing invisible thresholds and reaching out to people.”

The third point in the triangle is how the work is accessed via server-based tools through which, says Smith, “co-production can occur easily across borders and time zones.”

Already live on the platform is ‘Put yourself in my place’, a commission by Ida Hansson (Sweden) and Milijana Babić (Croatia), which at first resulted in two displays of the work in Umeå, Sweden and at Galerija Drugo in Rijeka, Croatia.

The artists swapped lives for an extended period in order to make the work, for which they won the Ivo Kalina award in Rijeka earlier this year. As Babić explains, it was initially aimed at two types of audience: “the ‘accidental’, who were around when the work was performed, and the ‘predictable’, in a museum or gallery.”

She adds: “We could not have imagined another type of audience, but with Corners Live our work communicates just as clearly in its digital version. Reaching new audiences through the means of technology has become very exciting to us.”

The online context provides an unveiling sense of narrative. Whether deliberate or not, the website looks like Airbnb; scrolling down reveals news clippings, photographs and children’s drawings, alongside films of performances, communal dinner-making and meetings with psychotherapists.

“It is a successful representation of the artists’ practice,” adds Smith, who worked with the artists through the server, digitally presenting the work to “draw the viewer in and engage them with the concept through a visually rich narrative.”

Back in March 2015, ISIS hosted artists’ residencies during the CORNERS North East Xpedition. In partnership with bait and mima, eight international touring co-productions featuring final commissions from the residencies will be seen by communities in south east Northumberland (2016) and Middlesbrough (2017).

“Artists are devising projects using very local partnerships in neighbourhoods both here and across Europe,” explains ISIS executive co-director Clymene Christoforou, who is also Corners’ local coordinator for Newcastle. “They are exploring the threads that connect us and the stories we share, to create new work.”

These threads and stories are all a part of ‘another’ Europe, to which ISIS attaches North East England to through the extensive Corners project. There is a greater focus on connectivity within this new collection of disparate communities, which exist at the edges of the continent.

Corners Live plays its part in tracking, exploring, presenting and reimagining all of this. “Interesting things will happen when these projects come to the North East, and we have more cards up our sleeves,” says Smith. “The planets have aligned with Corners Live – we have a real opportunity now to do something fascinating.”

Corners project: 55 artists to turn Europe inside out