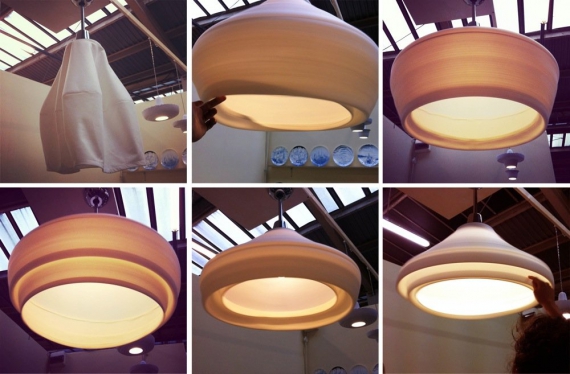 In January, Bristol’s Watershed launched its inaugural Craft + Technology residencies. Funded by the Esmée Fairbairn Foundation and run in collaboration with the Crafts Council, i-DAT in Plymouth and Autonomatic in Falmouth, the programme supports three UK makers to develop innovative projects, bringing together making and design with digital, networked technologies.

Heidi Hinder, Patrick Laing and Chloe Meineck are exploring the arena known as the internet of things, where physical objects become embedded with smart technologies, enabling communication between the objects themselves and users. Artist-maker Hinder looks at ideas of value in a digital age where obsolete monetary tokens may hold narrative capacity; 3D designer Meineck’s Music Memory Box integrates audio triggers and objects as a means of stimulating memories for dementia sufferers; and product designer Laing hopes to develop large-scale, networked lampshades whose changing forms will create unfolding, physical dialogues in public spaces.

These residencies respond to the current global interest in interactive objects. Research and investment in the sector is high. However, questions regarding craft’s contribution to this discussion have emerged. What can the material sensibilities of contemporary makers bring to this area?

“Governments and technology companies are investing heavily in the infrastructure of the internet of things,” says Clare Reddington, Director of Watershed’s Pervasive Media Studio. “At Watershed, we think that exploring the potential of this area in terms of look, feel and experience design is also really important, and one way to do that is to invite makers to contribute to this emerging field.”

Collaboration is key to the three residencies. The makers have been embedded within specialist supporting organisations and allocated a technology mentor to help navigate their projects. “The residencies support makers to work with technologists, exchange skills and knowledge, and turn ideas into tangible prototypes,” explains Reddington.

Resident at Watershed, Hinder’s desk is situated in the Pervasive Media Studio, a contemporary, open-plan hub. “The fluidity of ideas and the free information and knowledge that are within the Studio are really inspiring and really valuable,” she says.

Coming from a silversmithing background, Hinder’s making is small scale and she is encouraged to work physically in the space, generating much interest from her diverse neighbours, who include mobile app developers, artists, programmers, academics, a space scientist and a robotics specialist. The strong conceptual focus of her project will be manifested through crafted interactive coins. Three weeks into the residency, she is still at the research stage; conversations with the Curator of Modern Money at the British Museum, the Technology Manager at the Royal Mint and futurologist Bill Sharpe have provided important insight for her project development.

Hinder’s prior experience of networked technology is limited; her exposure at Watershed to these new potentials will, she says, be key in directing her future practice. She is exploring the use of RFID, a system currently used in Oyster cards. This tag and reader technology will enable her to embed narrative data into her objects or perhaps track their social journeys. For Hinder, using networked technologies opens up the potential of her intricately made sculptures, while still maintaining the crucial sensory experience in the materiality of the handmade.

Hinder admits that there are challenges ahead. “It can be daunting as a craftsperson, technology is quite mysterious,” she says. “Whilst in some ways this is a limitation, it is also an opportunity – I don’t have inhibiting factors of ‘I can’t do that’. That can be a positive thing.”

Like Hinder, recent graduate Chloe Meineck is exploring RFID technology within her socially engaged project, the Music Memory Box. Meineck’s project is widening its scope from the personal in an attempt to create a social product to assist dementia sufferers. She has been placed with Autonomatic, a research group in Falmouth University, and is situated in the Academy for Innovation and Research, a busy, open hub. As with the all the host institutions, it is the creative conversations generated by this environment that resonates. “The residency will give me confidence in my abilities and hopefully lead to further collaborations,” she says. “It adds a seriousness to the project.”

The Music Memory Box will be filled with hand-made, evocative objects embedded with data to activate songs via the RFID system. Part of Meineck’s week is spent working in the community – practical workshops in a day centre, memory café, sheltered housing and hospital help her evaluate and identify the most effective memory stimuli, which she sees as her greatest challenge.

“I hope to overcome these challenges by developing kits that people and families can make together and produce a personal, bespoke box,” she explains. Material experimentation is ongoing; air-drying modeling clay, laser cutting, 3D scanning and marquetry may be employed. “I always think about people, especially older people, in my work, and ‘craft’ is something they understand and ‘get’. In a way, I’m making technology accessible for them.”

Patrick Laing’s project deals with industrial-scale making. He is placed in the tech-orientated environment of i-DAT at Plymouth University. An established product designer, material play is key to his practice. “Technology is another material challenge that offers new potential,” he says. Laing has already sourced fabric that suits networked manipulation, to be used for the lampshade skirt. Tibex, a plasticised version of felt, offers longevity to the spinning lampshade forms; materiality and technology must co-exist. “The material is key to the development of the project in relation to networked entities in corporate spaces,” says Laing. “They need to maintain function.”

Laing sees the Watershed residency as significant to his career, saying that “opportunities like this allow a bridge to occur that otherwise might take too long on your own.” He feels lucky to be engaging with expert technologists and learning new skills; his current research examines proximity sensor communication to create this body of sentient forms affected by air movement and human presence. 3D scanning of adjacent skirt surfaces may be introduced, creating an interactive dialogue as one form influences another.

Laing sees the physical act of making as crucial in the relationship with new technology, packaging and substantiating the immaterial. As he says: “In order to reconcile physical problems one needs to deal with the material.”

Craft is no stranger to technology. The Power of Making exhibition at the V&A in 2011 and the Crafts Council’s Assemble Conference in 2012 reflect an increasing level of craft activity around networked technologies. The work of leading makers such as Hazel White and Michael Eden is evidence of this emerging interest in developing smart objects within craft.

At a grassroots level, Maker Faires, fab labs, hackspaces and open-source working have provided a rich environment for makers and technologists to explore network potentials on an individual scale. The Watershed residencies place this innovative collaboration within a professional, product-led context – Hinder, Meineck and Laing will develop prototype products using smart technologies, placing them right at the heart of the internet of things.

The three month Craft + Technology Residencies commenced on 7 January 2013 and will culminate in a showcase event at Watershed on 28 March 2013.

This article was co-commissioned with SyncTank, the online magazine of Sync – a set of activities designed to support cultural organisations in Scotland develop a more progressive relationship with technology and technologists.