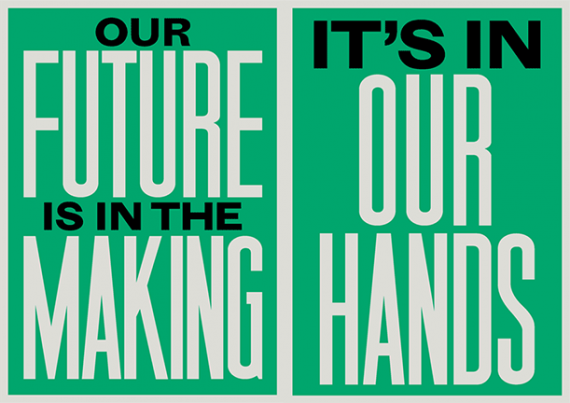 The Crafts Council is calling for changes in the way craft is taught in schools and higher education with the publication of what it is calling an ‘education manifesto’ for the next parliament.

Supported by a coalition of businesses, makers, educators and crafts organisations, Our Future is in the Making: An Education Manifesto for Craft and Making sets out a programme of action for parliament following the May 2015 general election.

The manifesto, which includes commissioned artwork by Anthony Burrill, follows the publication of Crafts Council’s Studying Craft report in February and a number of workshops across the UK to discuss the report’s findings.

Studying Craft showed that participation in craft-related GCSEs fell by 25% and the number of higher education craft courses fell by 46% between 2007-2012, while elsewhere around the globe investment in creative education and making has been rising.

A further research report published last month, Measuring the Craft Economy, on the value and scale of craft’s contribution to the UK economy, shows that craft skills contribute £3.4 billion to the economy across a number of industries including fashion, film, medicine and engineering, and that an education in craft develops creativity, inventiveness, problem-solving and practical intelligence.

The education manifesto calls for five key changes during the next parliament:

Put craft and making at the heart of education: Offer opportunities to make throughout education; revitalise learning with hands-on experience and stimulate take-up of GCSEs in art, craft, design and technology

Bring the entrepreneurial attitude of makers into education: Promote enterprise at every stage of learning; make more opportunities for craft businesses and educators to work together

The manifesto was officially launched during an all-party event at the House of Commons yesterday, Monday 10 November, hosted by Shadow Education Secretary Tristram Hunt MP and attended by Edmund de Waal OBE, artist, potter and writer; Geoffrey Crossick, Crafts Council Chair Professor; and apprentices from Goldsmiths Company and social enterprise Out of the Dark.

Crafts Council is also calling for individuals and organisations to get involved in realising the ambitions of the manifesto through collective action using social media hashtag #FutureinMaking.

To read the manifesto and for further details of how to get involved see www.craftscouncil.org.uk/what-we-do/education-manifesto