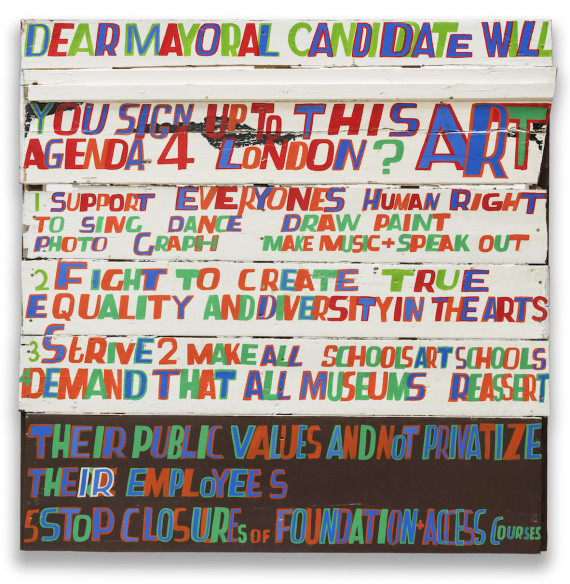 Bob and Roberta Smith’s latest exhibition, Art Is Your Human Right at the William Morris Gallery, London closes this Sunday. It is hoped, however, that the underlying message of the show will have a much longer impact – in particular the work, Dear Mayoral Candidate (pictured above).

The text piece calls for London’s prospective mayoral candidates – who Londoners will be voting for on 5 May 2016 – to sign up to an arts education pledge. Visitors to the exhibition have been leaving suggestions of what that pledge might include on postcards provided by the gallery – and they’re certainly not mincing their words.

One visitor wrote: “I am so miserable as a primary school teacher that we have to fight hard to squeeze in an art lesson between the never ending stream of SPAG, Maths and English! We want a creative curriculum not tests.”

Another made reference to London Met University’s planned £50m sale of its venerated art school CASS, saying: “Stop the idiotic closure of The CASS in Aldgate.”

The current hot topic of London becoming too expensive for creatives was also mentioned. One visitor wrote: “Affordable housing!!! Artists of all kinds, including musicians like me, are being driven out. I do not need to own a home. I just want to not be a victim to the whims of private landlords who could make me and my 3 year old child homeless.”

Other suggestions included: “Give people art and give people hope. We could do with some right now,” and “Give every child a paintbrush”. 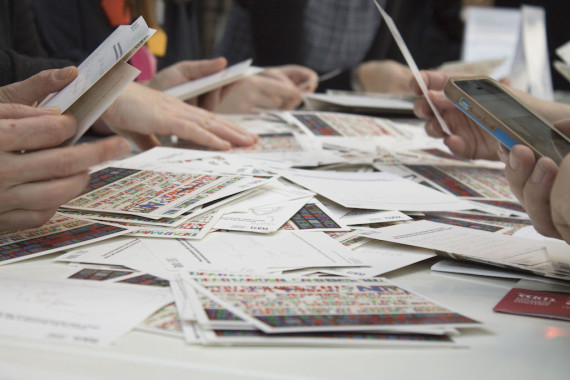 The William Morris Gallery exhibition features work from Smith’s various campaigns, ranging from his Letter to Michael Gove, to the launch of the Art Party and his 2015 general election campaign when he stood against Gove in the Surry Heath constituency.

Combining film, placards, sculpture, banners and even his slogan-covered campaigning van, the show makes the case for creativity, with Smith stating: “All schools should be art schools.”

EBacc and the arts: “We are increasingly having to justify our existence on the curriculum”