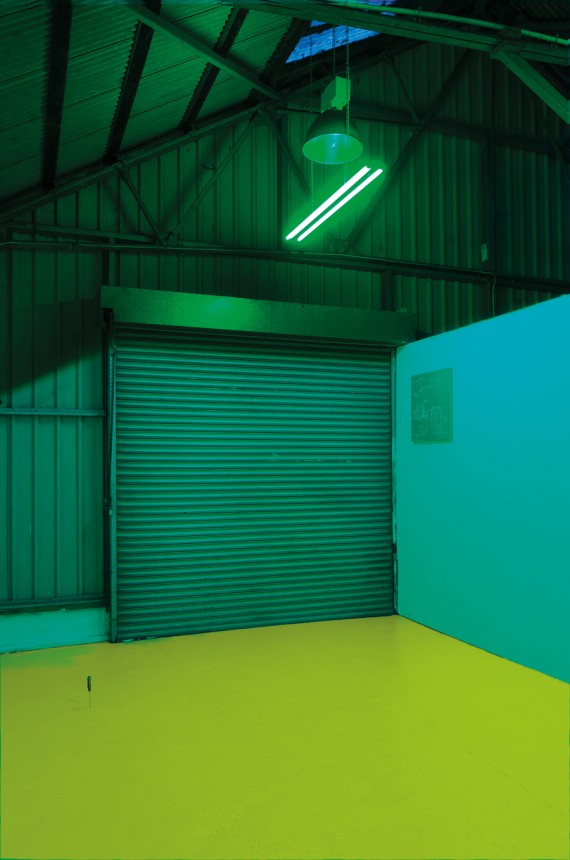 London’s annual Art Licks Weekend returns again this year and continues to expand. Now in its third year, there are over 90 venues taking part as the festival’s original south east London focus has expanded to include an ever-growing number of spaces in north east London and the beginnings of a presence for the south west.

Along with new additions such as Turf projects in Croydon, Clapham Orangery, The Ingelow Gallery and Martin’s Place in Battersea, also taking part this year is Paul Cole and Natasha Kahn’s DOLPH projects.

Over the past year, the pair have been inviting artists to exhibit in the project space at ASC studios in Streatham Hill. More than an exhibition, the series is a critical dialogue between each artist and their own work – the brief being for the exhibitor to reveal something personal about their process and influences. So far, Philip Newcombe, Alan Magee, Luke Gottelier, David Blandy & Larry Achiampong, Juliette Losq and Cathy Lomax have each undergone this contextualising process.

For Art Licks, Cole and Kahn are now turning the brief on themselves and sharing the secrets behind their own practices, in an exhibition of their work titled The Directors. “We came up with this idea, based on artists’ inspiration, because no-one sees that part of it,” says Kahn. “At exhibitions you usually get the finished product, you don’t get the blood, sweat and tears.”

DOLPH came out of a pub conversation over a year ago when the pair were thinking about how they could open an exhibition space in Streatham, where they live and work. A friend pointed out a simple solution – their studios. Cole and Kahn put in a proposal to ASC to use the shared project space for exhibitions and were offered its use for a two-week show every two months.

“The size of the space didn’t lend itself to group shows,” says Cole, who also sees DOLPH as a way of bringing dialogue and new faces to the ASC community. “As we’re part of a studio, it’s nice to ask a bit more of the [guest] artists. We’re interested to know how they work – I think all artists are.”

Despite DOLPH and ASC being lone projects in Streatham there is an underbelly of creative activity in this Lambeth ward. The area’s historically low house prices, transport connections and proximity to Brixton, Clapham and Peckham have seen artists and curators gravitate to the area, including a surprising number of established and high-profile practitioners.

Given that the DOLPH brief invites artists to reveal something personal within their exhibitions, is this something they themselves also find difficult to share? “I used to not like to let people into my work,” says Kahn. “I’d call a work ‘Cliff Richard’ when it had nothing to do with him.”

For The Directors, Kahn will be exhibiting a new body of work that has taken her in a new direction – from abstract paintings of hoardings, a fascination with building sites has shifted to transforming her studio into one.

Gaffer tape, scrunched up photographs of architecture, images of wheelie bins and lengths of concrete that Kahn has made using scavenged metal objects as the mould, will be installed in front of an exhibition structure that divides the space. Acting as both an artwork and a display partition, it is Kahn’s first full-size hoarding installation.

“I was interested in the hoarding itself – I wanted the clean line,” says Kahn. “Before, all my shit used to be behind it, now it’s going to be in front of it.”

The back of Kahn’s hoarding reveals a white corridor-like space where Cole’s work will conduct a different kind of dialogue. “It’s a pathway through my thought process to an end point,”  he says.

Cole’s starting point is drawings of “anything and everything”. Using collage, he focuses on the shapes, often transforming the drawings into objects that he then incorporates into a much larger painting. “It’s really quite intuitive,” says Cole of the main piece he plans to exhibit over the weekend. “Several drawings have gone into that painting and been obliterated and spun around.”

Celebrating the artist-led, grassroots and independent curatorial projects, Arts Licks Weekend culminates with an announcement this Sunday of the winner of Artquest’s Workweek Prize, aimed at rewarding a risk-taking, publicly-focused and critically aware project. A cash prize of £600 will go to one of six shortlisted artist-led or independent projects exhibiting during the weekend. The current shortlist are DKUK, Seen Fifteen, VERBureau, A-side B-side Gallery, Art Barter and A—Z.

DOLPH Projects is part of Artlicks Weekend. All exhibitions are open 2-4 October 2015, daily 12-6pm. All previews are Thursday 1 October, 6-9pm. For full details of all the exhibitions and venues see the programme map.