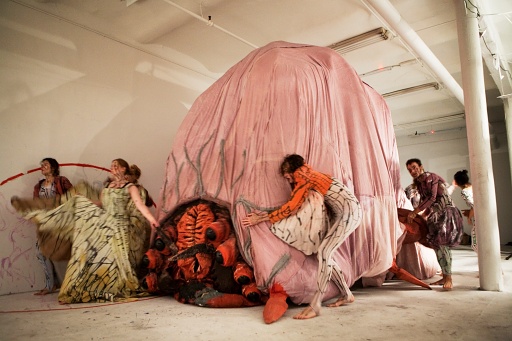 Edinburgh Art Festival has revealed its 2015 commissions programme. Showcasing new work by leading Scottish and international emerging and established contemporary artists, the commissions will respond to the festival theme of ‘The Improbable City’.

Referencing the city’s architecture and setting, highlights include a large-scale sculpture at the city’s Waverley Station by Scottish artist Charles Avery. This site-specific work will form part of Avery’s ongoing Islanders project and will be exhibited in tandem with a solo exhibition at Ingleby Gallery.

Past Turner Prize nominee Marvin Gaye Chetwynd, who is now based in Glasgow, will present a performative installation sited within the debating chamber of the Old Royal High School.

International artists exhibiting include Kemang Wa Lehulere, who will present a new large-scale wall drawing in chalk which will be erased at the end of the festival. Quebecois performance, installation and video artist Julie Favreau will exhibit a new work at the Scottish National Gallery of Modern Art.

In addition, a number emerging artists are showing work, including the Edinburgh-based Finnish-English artist, composer and vocalist Hanna Tuulikki, who last year presented her ambitious Away With The Birds performance on the remote Scottish island of Canna, as part of the Glasgow 2014 Cultural Programme. There will also be a new commission by the Irish video artist Emma Finn.

As part of the festival there will be a daily programme of events, talks, tours and performances. Full details will be announced soon.