Energising Culture conference: "If we support climate damaging models, what message does it send to our audiences?" - a-n The Artists Information Company 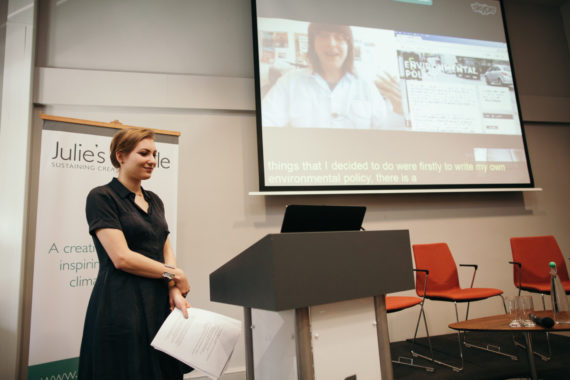 Taking place in the Barbican‘s Frobisher Rooms, just off the leafy surroundings of the Conservatory Terrace, Energising Culture was a one-day conference organised by Julie’s Bicycle, a London-based charity that supports the creative community to act on climate change and environmental sustainability.

The aim of the event was to explore the opportunities and risks for the arts and creative industries in the context of a growing move towards renewable energy.

The issue of how cultural organisations can build their financial resilience while helping to build a more sustainable world was covered by a raft of speakers, ranging from artists and arts directors to environmental consultants and representatives of Arts Council England.

The difficulties of taking on a fossil fuels-free approach were highlighted by a number of presenters, including Laura Coleman from ONCA Gallery in Brighton. The non-profit space runs exhibitions that raise awareness of the changing planet, yet at times struggle to follow their own ethos.

Coleman commented: “It is really hard to do it on a day-to-day basis, even within our small team of three full-time staff. We do little things like using disposable plastic and recyclable paint, plus serving vegan food at our events. But we are based in a Grade 2 listed building which itself presents a number of problems.”

The issue of ethical sponsorship was heavily discussed, with Coleman encouraging the audience to sign up for Fossil Funds Free, a collective of arts organisations and creative individuals that have pledged to create an oil-free cultural sector. She said: “It’s simple. Do not take oil, coal or gas sponsorship. If we support climate damaging models, what message does it send to our audiences?” 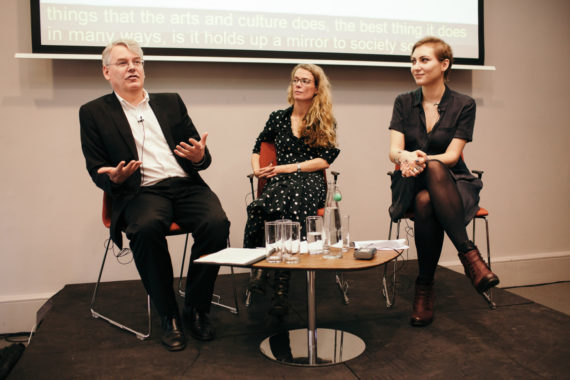 This message was backed up by Ellie Harrison, who in 2010 became the first artist to publish an Environmental Policy on her website. Delivering her presentation via video link to cut down the carbon footprint of the event, she explained how since 2015 she has been developing the Radical Renewable Art and Activism Fund (RRAAF) project, with the aim of establishing an autonomous funding scheme for art and activism around the UK, powered by renewable energy.

Explaining the wind turbine project, she said: “In the wake of continued cuts to public funds for the arts and as an ethical alternative to corporate sponsorship, RRAAF is a critique of these existing funding systems.”

She said that although there are groups such as Art Not Oil that have successfully challenged the way fossil fuel companies co-opt culture to validate their industries, RRAAF “offers the solution”.

Harrison commented: “It will be a self-sustaining model that will fund art-activist projects that perhaps couldn’t get funding elsewhere, maybe because they are dealing with contentious issues. I would also like to see the money used to fund other forms of activism across the UK.”

The project is in a two-year development phase, with RRAAF currently raising funds for a project manager and looking for a suitable site. “It is crucial that we can sell energy to the local community so there is a benefit to it being urban. We still need to raise around £50,000 – but artists are quite persistent. We won’t give up!”

The next session featured Lisa Ashford, director and CEO of Ethex, a not-for-profit, ‘positive investment’ online platform, with Francis Runacres, executive director of enterprise and innovation at Arts Council England.

Runacres said arts organisations could no longer see environmental sustainability as a bolt on and that it should be at the heart of what they do, not only in relation to how they operate but also the type of shows they put on.

He said: “Audiences will see more and more exhibitions dealing with environmental issues. Art holds up a mirror to society, and this is a critical issue.”

Runacres added that this will be reflected in the ACE’s latest funding round: “Band three galleries receiving over £1 million in funding will need to show leadership – and this includes on the environment. They have a sectorial responsibility to smaller organisations.” 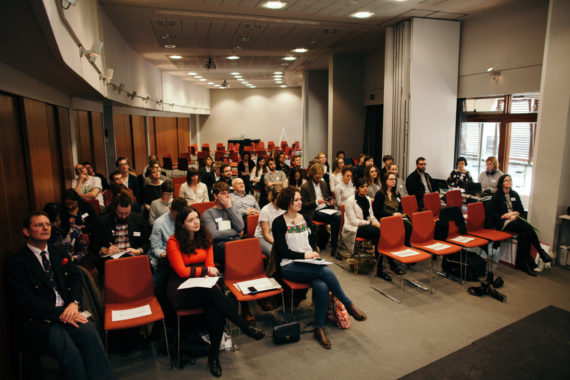 Chiara Badiali, programme manager of Julie’s Bicycle, responded by highlighting the difficulty of finding funding for “unsexy things like building insulation”. Runacres responded: “ACE are great at funding the boring stuff. A donor might get the naming rights, but we can help pay for the lighting. We are interested in the totality, and we can insist on part of the agreement being on environmental sustainability.”

Charmaine Coutinho of Good Energy warned that her presentation might also deal with the “boring stuff”. Although it was certainly packed with facts, figures and pie charts, she did highlight some crucial information.

Coutinho explained that there are “50 shades of green”, stating that there is no official definition of what green energy actually is. Whether it be low carbon, carbon neutral, zero carbon or simply ‘green’, she said arts organisations should be doing more research into exactly what their energy supplier is offering. In essence, she was warning that some organisations might incorrectly believe they have switched to zero carbon, when in fact they haven’t.

One of the final speakers was Bridget McKenzie of cultural consultants Flow Associates, who discussed ethical sponsorship. She managed to pack a huge amount of information into what was a short 15 minute slot, criticising people who continue to be ignorant of the ongoing damage to our environment by fossil fuels and calling on arts organisations to take a stand.

Energising Culture took place on Thursday 9 March 2017 and was the first in a series of events organised by Julie’s Bicycle focusing on energy, ethics and finance for the cultural sector. www.juliesbicycle.com