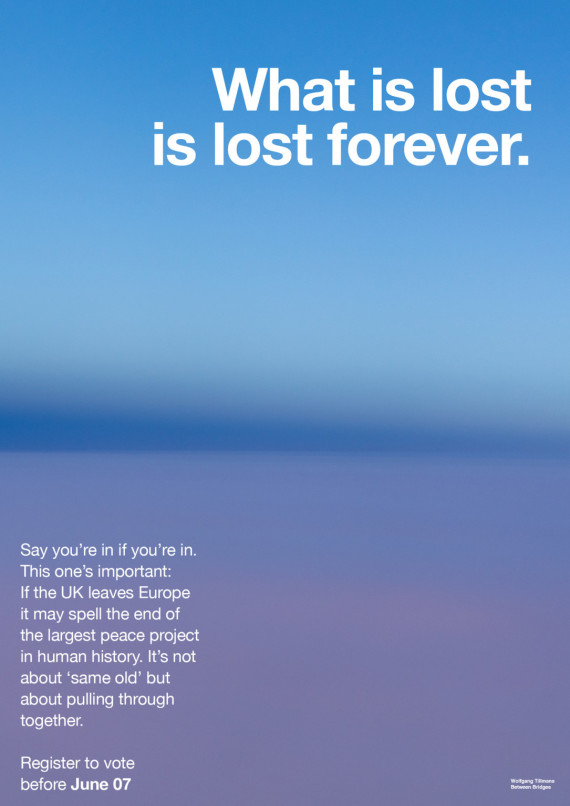 The decision to leave is one that is roundly rejected by most in the arts, who in the lead up to the referendum have been overwhelmingly in favour of remaining.

Writing on Facebook, Charles Esche, the Edinburgh/Netherlands-based director of Eindhoven’s Van Abbemuseum and editorial director at Afterall, said: “Brexit just became official. Whatever happens from now on, I felt sick waking up in Edinburgh.

“So many selfish, angry, bad, violent things are a little bit bigger and bolder in the British state today, while human solidarity, generosity and hope for a better, interdependent world have been diminished.

I know there is so much worse for so many people across the world, but this corner of North-West Eurasia just got a little less responsible for its past and present, and that doesn’t help anyone.”

On Twitter, the London-based artist Peter Liversidge said: “It’s a devastating morning all-round. No matter the cause it’s devastating, England has hit reset.”

I AM STILL MORE EUROPEAN

In Manchester, Castlefield Gallery director Kwong Lee tweeted: “Can’t believe we voted out of Europe. Just hope that we don’t retreat into Fortress Britain but can progress democracy and human rights!”

Edinburgh-based artist, writer and academic Maria Fusco summed up what many in the visual arts are feeling as the decision sinks in, tweeting: “FUCK”.

Also taking to Twitter to express its frustration about the result, Birmingham-based artist-run gallery Eastside Projects has made a plea for more artists to move to the city, which voted 50.4% to leave:

More artists is what we need. More art. More culture. Make the country better as a whole through more art, & people will demand to remain. — Eastside Projects (@eprjcts) June 24, 2016

Right, I’m going to do what any self respecting artist-curator-director should do – I’m going to the gallery to smash shit up.

Writing on Facebook, the Scottish artist and poet Alec Finlay expressed his anger and frustration at the result, citing the huge disparity between the voting in Scotland (62% to remain) and England (53.4% to leave): “I dream of a mass civil disobedience in Scotland: the refusal to give up our EU passports. Those from other countries in the UK would be welcome to join in.”

In a lengthy post he added: “The map is yellow all over. My city [Edinburgh] voted 75% to remain European. I want to say: you can’t have our European passports. I want to make sure that doesn’t happen, whatever it takes – not for the EU, but a love of Europe, and a hatred of Imperialism.

“For the 70% of young people who wanted to remain Europeans, who the Tories refused to give a vote. And to show those No voting Welsh towns that the Tories decimated, and which EU funding patched together, than fear and racism are no answer.”

He continued with a renewed call for Scottish independence: “It is time for self-determination – less to be a nation as, paradoxically, so that we can belong, so that we can be at ease again, in a world of variety and troubles. England is going to be a ferment of poverty, fear and prejudice for years, and that is going to wash over us in malign waves – more cuts, more being ‘othered’, and with us powerless to represent our own values in the world, or protect immigrants.

“The shocking unconscious revelation of Farage’s claim to have won ‘independence’ for his ‘country’, without ‘bullets’ rings in our ears. It stands for a moment of historical deafness in parts of England. We hear evil.”

Other responses include Brighton-based artist Masa Kepic, who said on Twitter: “We are intelligent, creative, resourceful, goodhearted people, and we will find a way.” Joseph Young, one of the artists behind @artsforeu, said @artofnoises: “Time for reconciliation and reflection in these dangerous times. “Art will not save the world” but decent people might…”

Meanwhile, on the @artsforeu Twitter, the message was succinct and resigned: “Goodbye and good luck. This account is closing in the next 24 hrs.”