First Person Plural: the photographer in the age of social media - a-n The Artists Information Company 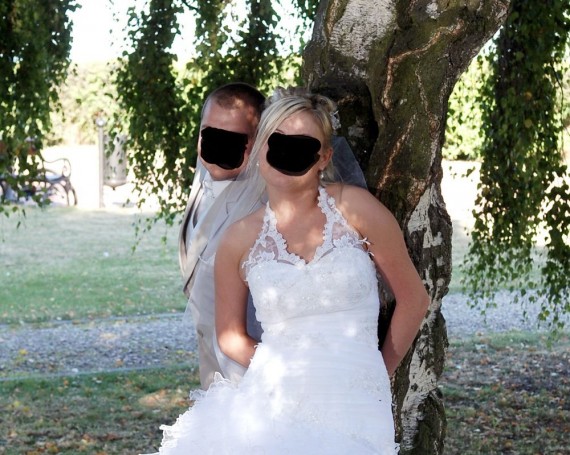 Images of brides wearing redundant wedding dresses, their smiling faces masked out, were projected above the audience during one of the many fascinating talks at the recent First Person Plural conference in London. The doctored images were part of Natasha Caruana’s Fairytale For Sale, for which she appropriated the online adverts of newlyweds who were selling off the stage set and props from their fairytale weddings.

Caruana belongs to a new generation of documentarians who are stretching and expanding the notion of what it is to be a photographer. She describes her approach as potentially ethnographic, grounding her practice in colossal amounts of research, the Internet and personal narrative. Caruana first made her name with the controversial series The Married Man, documenting occasions when she arranged via a marital affairs website more than 80 ‘dates’, which she then shot surreptitiously on a disposable camera.

Taking place against the backdrop of the inaugural exhibition at London’s Media Space – Only in England: Tony Ray-Jones and Martin Parr – the conference served up a timely assessment of how advances in technology and social media platforms are both inflecting changing patterns in societal behaviour and providing countless image-making opportunities to photographers working in the medium’s expanded field.

As the event’s curator Steven Bode, director of Film and Video Umbrella, set out in his introduction – and echoed later in the day by photography historian Julian Stallabrass – Ray Jones’ photography from the 1960s and early ‘70s represents a very singular view of the world.

Nostalgic both then and now, his photographs of the English at leisure report on an enduring but fading England, as old ways of life teetered on the brink of disappearance amidst cultural influences from the US and the accelerated forces and homogenising effects of global capitalism. To borrow the oft-cited term originally coined by Roland Barthes in his seminal 1980 book, Camera Lucida, Bode added that, for him, a black and white photograph has come to stand as his ‘punctum’ amidst the glut of imagery that surrounds us today.

A medium still being invented

That glut, or flow of fragments of images, was brilliantly addressed by the critic, curator and Professor of Film and Television at Goldsmiths, Sean Cubitt. His zany lecture took some interesting and imaginative leaps, including the argument that CCTV is the true record of a place and its inhabitants – or rather the ephemerality and erasure of a place and its inhabitants. He also reflected on the phenomenon of the ‘selfie’ as a gesture and ritual that says, “I exist, I’m here”, as the idea of the individual is constantly eroded. Finally, he reminded the audience that photography, given that it is only 180 years old, is relatively young and very much still being invented.

Indeed one such invention has been unveiled by the prolific artist duo Adam Broomberg and Oliver Chanarin, who gave an eloquent overview of their practice before discussing their forthcoming curatorial project, Shtik Fleisch Mit Tzvei Eigen. As part of a residency at Media Space, the 2013 winners of the Deutsche Börse Photography Prize are embarking on an investigation into the technique of ‘non-collaborative portraiture’. It comprises machine created imagery for taking pictures unbeknown to the photograph’s subject: an ominous facial recognition system developed for use in border control and state surveillance.

The result is a three-dimensional rendering that can be examined from all angles. Broomberg described it as replacing the ‘meaning’ of the face with mathematics – a counterpoint, to some extent, to Caruana’s images in Fairytale for Sale, with its attempt to anonymise the process of making public something that is private.

The way the conference was structured, with ample space and time given to artists working collaboratively, seemed to be suggesting that the myth of the ‘photographers’ eye’ and ‘the decisive moment’ that has long underpinned photography is dissipating. In its place is a new type of collective portrait, born of aggregated material along with the capture, curation and storage of data.